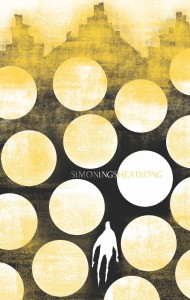 What do you do when your head’s full of useless sockets, when you’ve been superseded by AIs, when you’ve been dumped back into a world where you can’t function properly and even schoolchildren take the piss? Headlong follows its post-human protagonist along the rough and uneasy road to normality.

Headlong, Simon Ings’ fourth novel, is an intelligent, compassionate portrayal of one man’s struggle to rediscover his humanity after the plugs wiring him up to enhanced sensory input are disconnected. The focus is on Christopher and his grapplings with everyday life, told in well-chosen, prosaic detail… Unlike many who write about neural implants and cyberspace, Ings remains firmly grounded in the everyday, with its small triumphs and disasters and roots in human frailty. Yale’s relationship with his posthuman powers is not simply one of longing for paradise lost. Rather, the message of this mature and thoughtful book seems to be that, ultimately, the human condition is worth fighting for, and transcendent itself in comparison to the mire and immorality of a dystopia that may be just around the corner.
New Scientist, 27 February 1999

Simon Ings’s irrepressible imagination has fallen headlong into a world that is truly strange — and strangely true.
George Dyson (author of Darwin Among the Machines)

A weird, wired and wonderful book from one of the brightest stars of future fantasy.
Attitude

After the frenetic ultra-stylism of cyberpunk, science fiction has slowed down a little. This wistful novel is a terrific example of the new genre: its main character Christopher Yale has been augmented, uploaded and implanted, but all he wants is to be human again. When his wife Joanne is killed, he must overcome his alienation from the ‘real world’ to avoid suffering the same fate. Various conspiracies unfold around a strange new drug, but the real story is Yale’s painful devolution to a regular human being. Simon Ings, my telepathic abilities tell me, has a serious career ahead of him.
Carrie O’Grady in The Guardian, Saturday 20 January 1999

For over 300 pages we share the life of a post-human who has to learn, again, to be human. It’s a compassionate and engaging piece of work. And it is a seriously good book.
Keith Brooke, Infinity Plus