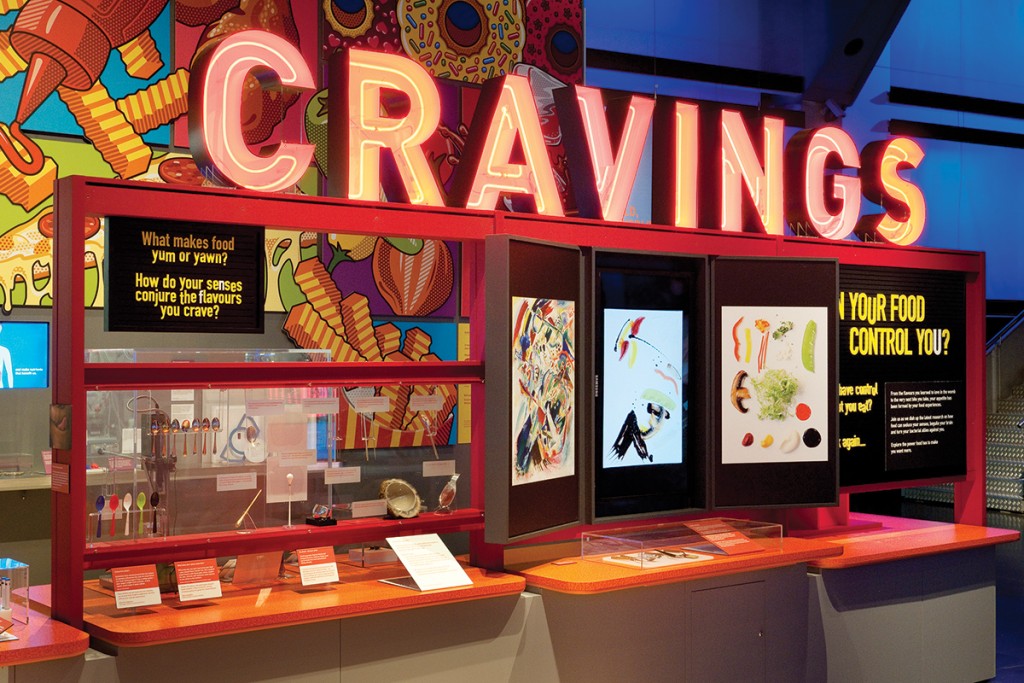 A visit to Cravings, at London’s Science Museum For New Scientist, 28 March 2015 (Incredibly, the subs let that headline go through on the print version)

SOME years ago, I was friendly with a family who ran a venison smokery. They were expanding their product line to include a venison salami. On one visit, they presented me with piles of sliced sausage: which recipe did I prefer?

My first mouthful was a disappointment. The sausage tasted of generic salami, hardly even of meat, and though I knew otherwise, it was hard to imagine that any deer had perished in the making of it. My second was just as bad. The body language of my hosts was revealing. My weak-beer praise simply confirmed what this conscientious family already knew: no tweaks were going to save their experiment.

As my friends discovered, you don’t need to be a big food processor to hit big problems. Since mass production renders the best ingredients to tasteless slurry, your job is to rescue, recreate or, frankly, fake the tastes and aromas you killed off in making your product.

The keen home cook’s first-aid kit includes fat, salt and sugar. But the food industry also uses (among many other extras) acids, enzymes, texturisers, blood plasma and grim-sounding powdered dairy essences. In Swallow This, the latest of a string of superior industry exposés, food journalist Joanna Blythman explains how far manufacturers will go to produce cheap foods that taste consistent, while retaining that “just-cooked” feel.

Her page about salami, for example, features company literature describing a meat glue made from the enzyme transglutaminase, blended with animal protein and vitamin B9: “Salami Dry Express B9 decreases ripening time by up to 20 per cent, creates a more… appealing colour in less time, offers improved casing peeling and… sausage aroma. Improved slicing properties reduce wastage by up to five per cent, while shorter processing and storage times also provide financial advantages.”

Each promise listed sounds reasonable. But taken together, they suggest an approach to food that can only disgust consumers. And this, chiefly, is why the food processing industry is growing ever more secretive, ever more insincere, and, more worryingly still, ever more removed from the real science of nutrition. Its prime concern is not food, but keeping up appearances.

Everyone imagines they want an authentic home-cooked meal, even as they “require honeyed cakes, unguents and the like”. This nice turn of phrase belongs to the Greek Cynic Diogenes, one of the philosophers in Michel Onfray’s slim, sly volume of essays called Appetites for Thought. Rather in the spirit of Bruces’ Song, Monty Python’s dipsomaniacal summary of the Western philosophical tradition, Onfray dishes out morsels under chapter headings like “Nietzsche; or The Sausages of the Anti-Christ”.

His simple thesis, that our minds are ruled by our stomachs, acquired a graphic reality in 2006, when Molly Smith, a 16-year-old from Cambridgeshire, UK, received a life-saving transplant. She had been born with much of her intestinal tract missing, and had never experienced hunger, thirst or any food cravings. When Molly finally ate her first solid food – a banana – she felt the stirrings of new sensations. Her guts were beginning to talk to her.

Molly’s is one of the more startling stories told in Cravings, at London’s Science Museum. The rich, mysterious, two-way dialogue between gut and brain that so entertained Onfray is its central theme, and serves as a playful entrée to health advice.

Though the exhibition is full of cautionary information about fat and sugar levels in many processed foods, it left this visitor hankering for the museum café. This is no bad thing. Food, any kind of food, is better than the alternative. And an exhibition about appetite ought to pique it.