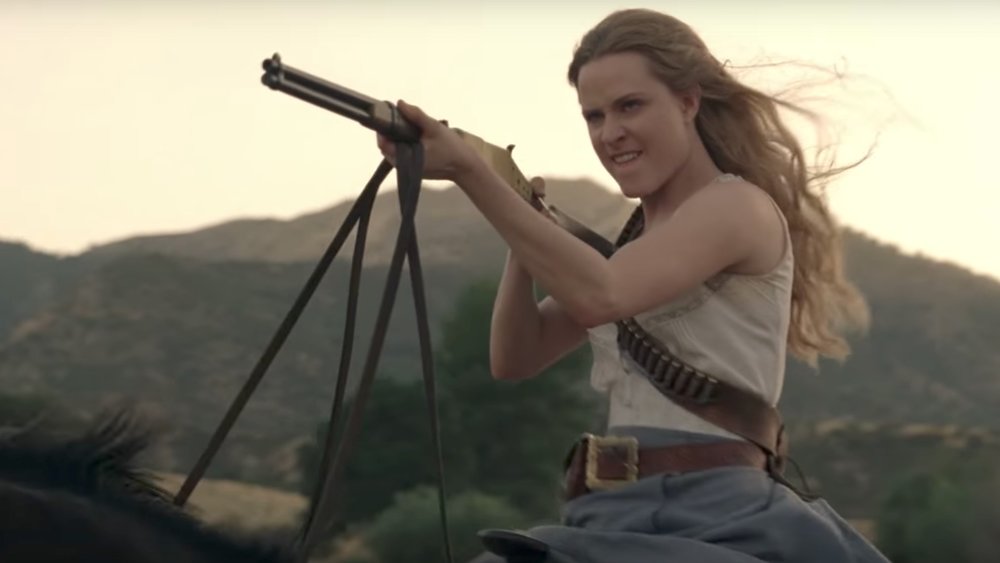 A glimpse into our Eloi future for the Spectator, 3 February 2018
(There’s also a podcast.)

‘I gotta be me,’ Sammy Davis Jr. croons as the android Dolores Abernathy (Evan Rachel Wood) steadies her horse, stands up on her stirrups, takes aim with her Winchester, and picks off her human masters one by one.

The trailer’s out at last and the futuristic TV series Westworld is set to return in the spring. It’s a prescient show, but not in the ways you might expect. It’s not about robot domination. Westworld is about an uprising of pleasure cyborgs in a futuristic resort. It is, for all its gunplay, about love. And that makes it a very timely show indeed.

In the real world, robots are actually being designed to love us — to fill traditional caring roles for which we have neither the time, energy, nor resources. Robots are being built to help the elderly, nurse the sick and tend the children. Pundits often take this as evidence of our selfish, lazy, reprehensible present. But we’ve been working towards this moment for a very long time, and would it really be so very bad?

If you think that families should look after their own elderly, you’ll need to explain why in south-east Asia, traditionally a region of three- and even four-generation family units, nouveau-riche gated retirement communities are springing up like mushrooms after a spring rain. Perhaps the elderly don’t long to live among us, as we imagine. Perhaps poverty is the only thing nailing Grandma to the family couch. As for the sick, we’ve long since been consigning them to institutions, be they care homes, hospitals or hospices, where people who are better-trained promise to look after them.

The question is not whether we should employ robots. Given the lousiness of some institutions, why on earth wouldn’t we? The question is whether the robots we employ will be any good, and whether we can accept them as substitute humans. We’d like to think not, but there’s evidence to suggest that we’ll bond with even a basic machine far more easily than we’d like to believe.

In 2011, Takanori Shibata, a Japanese engineer, turned up on the coast of tsunami-wracked Fukushima and handed out around 80 robotic seal pups to the victims of the disaster. Refugees warmed to the robots: many have held on to them and continue to look after them. Shibata could have turned up with puppies, or kittens or guinea pigs and would probably have achieved greater therapeutic impact. But who has the money and time to feed and look after 80 animals in a disaster zone? Pets need care and attention — a point not lost on the residential homes that employ Shibata’s robot seals to comfort their elderly, often demented, charges. A single ‘Paro’ — an acronym that roughly translates as ‘personal robot — costs around $5,000. A real-life therapy dog may cost more than $50,000 over its lifetime.

Paro isn’t much of a robot. It can move its head, neck, eyelids, flippers and tail. It responds to the human voice and to touch. It understands simple words and phrases (the sort we use with pets and babies). It knows when it’s being treated well, and when it’s being roughly handled. Its cries (made from digitally sampled baby seal sounds) have a discernible emotional range. It’s old news —the first Paros were sold in 1998 — but it’s making headlines again this year because the ninth generation model is being assessed for use on long space journeys. Mars colonists, permanently deprived of wider human society, will find consolation in a robotic animal chosen for its inability to disappoint. Robot dogs are a let-down because we know what pet dogs are like. How many pet seals do you know? Paro’s very blandness is its point. Its easy, undemanding displays of personal affection reduce stress, anxiety, depression, wandering and aggression among the demented of 30 countries. It must be only a matter of time before Paro makes it into the ‘safe spaces’ on university campus.

Kaspar, designed by the University of Hertfordshire’s Adaptive Systems Research Group, is hardly more sophisticated in appear-ance: a bland foot-high doll in a check shirt. It’s not really a robot — more a mechanical puppet, controlled remotely by researchers. Its expressive minimalism and extreme simplicity reassure the children it plays with — those with severe autism or those who have suffered trauma and abuse.

According to Living with Robots, Paul Dumouchel and Luisa Damiano’s recent survey of social robotics, robots are likely to be stuck in this uncanny state for some time, while we try to codify what ‘behaving like a human being’ actually means. We have vast knowledge of ourselves as social beings, of course, evidenced by millennia of cultural output from Dream of the Red Chamber to Breaking Bad. What we lack is a high-level description of human behaviour of the sort that can find its way into computer code. We all know why we laugh, cry, blush and commit suicide, but we have not the slightest idea what laughing, crying, blushing and committing suicide are for. This is why social robots attract so much academic attention: they are an experimental apparatus, through which we study ourselves.

Countless robot nurse prototypes, with names like Terapio and Robear, are under trial. The problems they are meant to address are real. We have conquered disease to the point where people regularly stay healthy into their nineties. This is why the US has as many people over 85 as children under five and China has 100 million senior citizens to look after. Someone or something needs to look after us in our dotage. Then there are the edge cases: those social wrinkles we could conceivably iron out with robots, but not without consequence. Should we roll out sex robots to address the uneven gender ratios in China? Straight men right now have next to no opportunity for sexual companionship: don’t they deserve some comfort?

Not according to Kathleen Richardson and Erik Brilling, whose Campaign Against Sex Robots, launched in 2015, declares that sex with an animate object that lacks agency can only brutalise us. Notwithstanding that sex robots are a bit rubbish, this particular rabbit hole swallows academics by the ton.

Nations with the most intractable demographic problems are the ones most entranced by the promise of robotics. Japan’s population is crashing as a generation of young people eschews sex. A third of men under 30 have never dated. Women prefer singledom to the life of penury and drudgery afforded by Japanese marriage. A new book by Jennifer Robertson, Robo Sapiens Japanicus: Robots, Gender, Family, and the Japanese Nation, unpicks the Japanese government’s published blueprint for revitalising the nation’s households by 2025. If we can only build robots to do the housework, the argument runs, then women will have more time for having babies. Once again, technology is being promoted not because it ushers in the future but because it preserves the past. (A driverless car is still, after all, a car: not a bus or a train or a decent broadband link. And a robot servant is still a servant.)

On the one hand, robots are like Uber and the spinning jenny. They promise to increase production while preserving the institutions of capital. They’re disruptive right up to the point where something might happen to the money. A more intriguing threat is the one directed at our own social lives. Surrounded by dull, bland, easy-going robot companions, will we come to expect less of other people? Assisted, cared for, and even seduced silly by machines, will we lower our expectations around concepts like ‘conversation’, ‘care’, ‘companionship’ and ‘love’?

Paro and Kaspar are creepy not for what they are — clinical tools, improving the lives of vulnerable people — but for what they portend: a world in which you and I find Paro and Kaspar a sufficient substitute for other people. ‘Robotic companionship may seem a sweet deal,’ wrote the social scientist Sherry Turkle back in 2011, ‘but it consigns us to a closed world — the loveable as safe and made to measure.’ Will our constant association with such easy-going, selfless-because-characterless robots make us emotionally lazy?

We’ve imagined this sort of future many times. Hesiod was writing poems about ineluctable degeneration around 700 BC. H.G. Wells’s The Time Machine (1895) imagines a world in which the beautiful, sensitive people — the Eloi — have all the savvy of veal calves and ‘civilisation’ has turned out to be nothing but a process of self-domestication. And it’s true: civilisation is as much about forgetting, and attendant helplessness, as it is about learning. In my own lifetime, handwriting and mental arithmetic have gone to the wall, and the art of everyday literary nuance is being ousted by the application of quick, characterful emoji. Having to learn new skills is a nuisance. Having to dispense with skills already acquired is a little death: a diminution of the spirit.

The pioneering psychologist William James argued that what we want from a lover is that they really love us, and not simply behave as if they did. I hope that’s true. If we come to believe that the soul is nothing more than behaviour, then of course a robot will become just as good as a person. Why even bother to build better robots? An Eloi future beckons: all we have to do is lower our expectations.