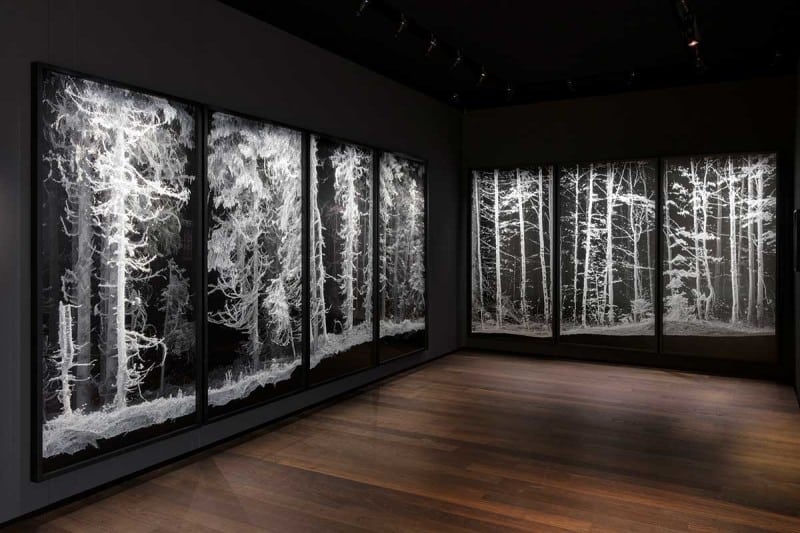 IT’S not often that artists presenting new work ask for the lights to be turned off, but here it makes sense. We hunker in the dark of hall 2 at the Messe Basel exhibition centre in Switzerland as tiny lights spill over the mesh sides of a large mechanical sculpture, producing tracks and spirals, and interference.

There is plenty of noise, too: HALO is essentially a gigantic bass harp, playing a score derived from raw data from the Large Hadron Collider (LHC) at CERN near Geneva. In 2015, CERN’s art programme hosted Joe Gerhardt and Ruth Jarman, who make art under the name Semiconductor; HALO is the most recent work to come out of that residency.

Its construction was commissioned by Swiss watch-maker Audemars Piguet, which has championed some of the biggest names in scientifically inflected art since 2012. In partnership with Art Basel, Europe’s biggest art fair, the company has backed the strangest projects. Take Robin Meier‘s jungle-like installations, inspired by the synchronous flashes of fireflies; or Theo Jansen‘s Strandbeests – eerily lifelike and intentional automata made of recycled plastic.

This isn’t mere “sponsorship”; it’s Renaissance-style patronage. The company’s engagement with and promotion of artists extends well beyond the launch of any individual artwork.

Once HALO has stopped reverberating, Jarman talks about how Semiconductor got started 20 years ago. “We were interested in matter, and how science provides us with the tools to perceive matter and material processes that would otherwise be hidden from us,” she says.

Acts of perception matter to artists, while scientists are more interested in the information those perceptions contain. HALO came about, Gerhardt recalls, through the artists’ desire to work with readings that were as close to natural perception as possible, before all the artefacts and noise are stripped away. “We spent three months working through the hierarchy – fighting our way to the vault, if you like,” he says.

It’s a point not lost on Olivier Audemars, HALO‘s patron. Although neither he nor his colleagues are directly involved in the commissioning process, he is as fascinated with science as with the art his company supports. The first scientists took their measures and concepts of time from the watch-makers, he explains the day after HALO‘s unveiling. “The greatest names in science used this analogy of the watch-maker to explain their vision of the universe, including Einstein of course, with his claim that God does not play dice with the universe,” Audemars says. “Though in that case,” he smiles, “it seems he was wrong.”

Technical and scientific interests drive a company like his, and shape its culture. “If I have an interest in cosmology and quantum physics, it’s because I’ve had those conversations, with my parents, even my grandparents.”

The artists who win commissions are invited to the company’s headquarters in the Swiss town of Le Brassus, and seem to fall quickly under their patron’s spell. Art history is not short of examples of this sort of arrangement going horribly wrong. But then, not every patron is a watch-maker, whose employees must couple art and science, mechanism and craft.

Jansen’s Strandbeests (on show this week in Singapore) are mechanism personified. Meier’s fields of artificial fireflies (last seen earlier this year in Thailand) are governed by how neighbouring pendulums synchronise. And HALO is a homage to the LHC – the largest machine in history – and a homage made mostly of one-off, handcrafted parts. The fact that on maps the LHC resembles a giant watch is, surely, just a coincidence.

Quayola says that he wanted to look at the valley, not with his own eyes, but through the eyes of a machine. He goes on: “I wanted to hand over to the machine the traditional activity of walking out into the landscape in search of an encounter with nature. For me, technology is not a tool. I prefer to think of it as a collaborator, engaging with things in ways unique to itself.”

It is a collaboration of equals, although initially the machines had the upper hand. “Scanning the valley using lidar technology was much more complicated than I had expected,” Quayola admits.

First there was the sheer amount of time required, with each scan taking some 10 minutes as the “camera” turns full circle, shooting out tens of millions of laser beams. And then there are the readings it gathers, which only make sense from one vantage point. To really capture the environment can take up to 60 scans for a single patch of forest. There’s a final complication: all those scans must be correctly linked to yield a coherent map of an area constantly being buffeted by the weather.

The resulting images are clearly not photographs, but equally clearly are not the product of the human eye. Get up close to this cloud of points and you can distinguish each constituent; the image can not only be seen, but read. Parallel rays spill from a clump of foliage, an artefact of an uncorrected optical occlusion. And a dark, knotted surface turns out to be built up from strangely wobbly rows and columns of dots representing “thin” data, revealing the raw back-and-forth of the scanning process.

From an ordinary distance, what is startling about these works is the total absence of lines in an image that is so obviously detailed. The lidar eye has no interest in edges and planes, yet it is “seeing” with an acuity we immediately recognise as close to, or even better than, our own.

Quayola, of course, did much more than set his machines running. Since laser scanning results in a vast Excel spreadsheet, he used a computer to render the data as point clouds and then spent a while moving through them digitally, selecting the angles and frames he wanted to work on. It’s an odd process – “like being a traditional photographer, stranded somehow in a purely digital realm”, he says.

Audemars Piguet does not own what it commissions.”The work belongs to the artist,” says Audemars. “That way, the project can continue to grow.” HALO, for instance, is getting a more flexible tuning mechanism, while camera drones are contributing to the next version of Remains. “We can’t predict the life course of these projects, and we wouldn’t want to,” he says. “Artists give us new ways of seeing the world. If that process is out of our hands, good. Why would we want to spoil the surprise?”