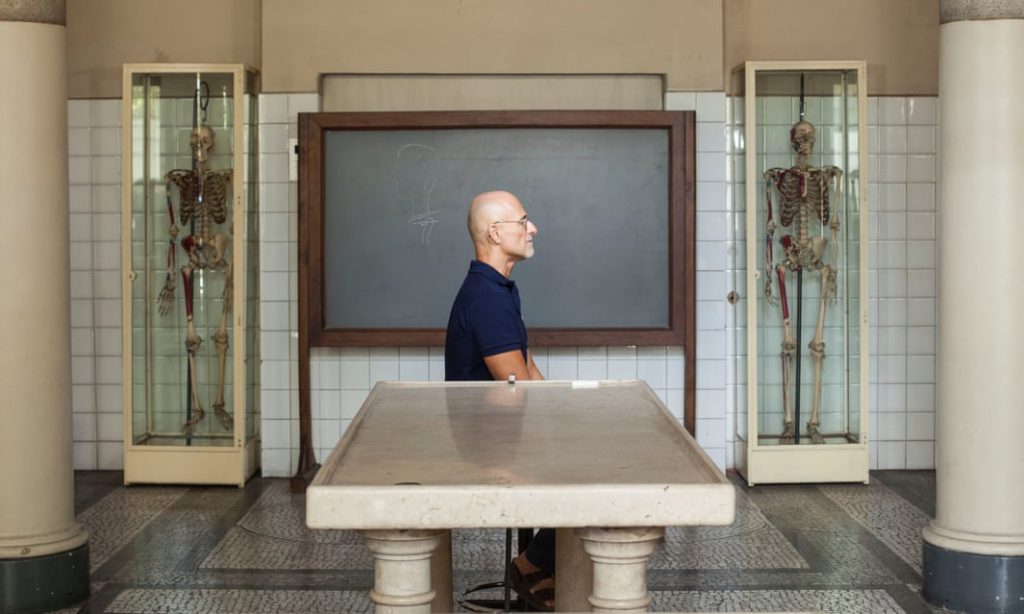 English speakers have only two or three translations from the French by which to judge the sometimes dreamy, sometimes nightmarish output of Tunisian poet and novelist Hubert Haddad. He began writing long prose in the 1970s and has been turning out a novel a year, more or less, since the turn of the century.

First published as Corps désirable in 2015, this novel sews a real-life maverick neurosurgeon, Sergio Canavero, into a narrative that coincides with the bicentenary of the first ever neurosurgical horror story, Mary Shelley’s Frankenstein.

Cédric Allyn-Weberson, scion of a big pharma plutocrat, has set sail for the coast of Paros with his war correspondent girlfriend Lorna Leer, on a yacht called Evasion. A horrible accident crushes his spine but leaves his head intact. Funded by Cédric’s estranged father Morice, Canavero sets about transplanting Cédric’s head on to a donor body. Assuming the operation succeeds, how will Cédric cope?

Haddad handles the subject of Canavero’s alleged head transplants (a matter of public record, and no little controversy) sparingly and well. The operation is captured in a closely choreographed sequence that remains wholly sympathetic to the surgical team while chilling the reader to the bone.

Nevertheless, this short, sly novel is not about Canavero’s surgery so much as about the existential questions it raises. Emotions are physiological phenomena, interpreted by the mind. It follows that Cédric’s head, trapped “in a merciless battle … abandoned to this slow, living enterprise, to the invading hysteria of muscles and organs”, can’t possibly know how to read his new body. His life has, sure enough, been reduced to “a sort of crystalline, luminous, almost abstract dream”.

Cédric doesn’t forget who he is; he simply ceases to care, and adopts a creaturely attitude in which self hardly matters, and beings are born and die nameless. In his world, “There was no one, with the exception of a few chance encounters and sometimes some embraces. Did birds or rats worry about their social identity?”

There is something dated about Haddad’s book: an effect as curious as it is, I am sure, deliberate, with piquant hints of Ian Fleming in his use of glamorous European locations. It’s in its glancing, elliptical relationship to technology that Desirable Body takes its most curious backward step. Yet this elusive approach feels like a breath of fresh air after decades spent wading through big infrastructure-saturated fictions such as Don DeLillo’s Underworld and Richard Powers’s The Overstory. Haddad focuses succinctly on formal existential questions: questions for which there are no handy apps, and which can in no way be evaded by the application of ameliorating technology.

The besetting existential problem for the book, and, indeed, for poor Cédric himself, is pleasure. He discovers this with a vengeance when he once again (and at last) goes to bed with his girlfriend: “Getting used to this new body after so much time seems like an appropriation of a sexual kind, a disturbing usurpation, a rape almost.” Lorna’s excitement only adds to his confusion: “The last straw is the jealous impulse that overtakes him when he sees her writhing on top of him.”

French critics have received Desirable Body with due solemnity. Surely this was a mistake: Haddad’s nostalgic gestures are playful, not ponderous, and I don’t think we are required to take them too seriously. Following Cédric’s dismal post-operative sexual experience, the book changes gear from tragedy to farce; indeed, becomes laugh-out-loud funny as he finds himself king-for-a-day in a buffoonish and clockwork world where “no one is really loved because we constantly go to the wrong house or the wrong person with the same extraordinary obstinacy”.

Desirable Body is about more than one decapitated man’s unusual plight; it’s about how surprisingly little our choices have to do with our feelings and passions. A farce, then, and a sharp one: it’s funny to contemplate, but if you fell into its toils for a second, you’d die screaming in horror.