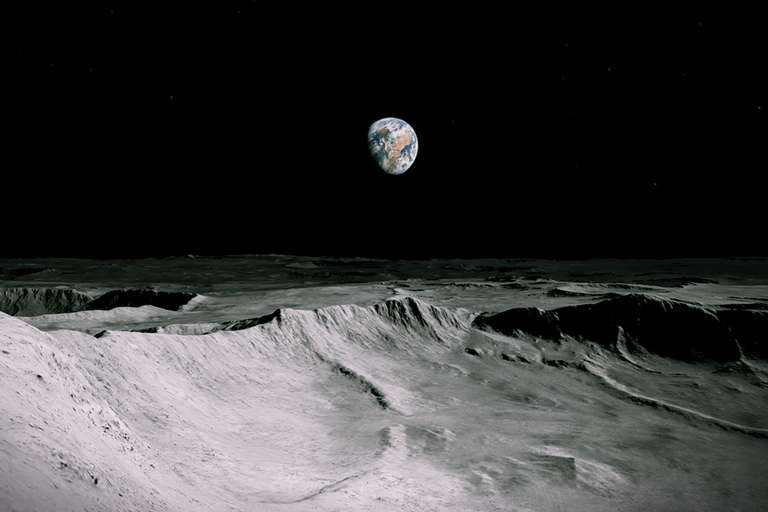 VISIT The Store X, a venue for art and design in London’s West End, and you are in for quite a journey. Wearing an HTC Vive headset, you are given an island to explore in Lunatick, a glossy, game-like virtual-reality experience that starts at Kiribati in Micronesia. For a while, you have the run of the place by means of hand controllers, although producers Acute Art plans to use EEG to let you control it with your thoughts.

Don’t get too comfortable. Wandering past a stone platform triggers the space elevator. It lifts you gently off your feet, then propels you through the stratosphere. This long, beautiful and increasingly uncanny transit carries you into the void between the moon and Earth.

Take a breath. Look around you. The geometrical relationship between the sun, Earth and its moon unwinds around you as time skews and the moon swells. Before you know it, you are skating around lunar crater rims, plummeting into craters, flying high, until, losing control again, you are flung into the sun.

Lunatick is the first joint work by British artist Antony Gormley and astrophysicist Priyamvada Natarajan from Yale University. Natarajan visualises the accretion history of black holes, and maps the granularity of dark matter by studying the way it bends light – a phenomenon called gravitational lensing. But she couldn’t resist the idea of giving space a sensual dimension by making the vastness and loneliness of the cosmos tangible.

Artist and scientist bonded over their early love of science fiction. H. G. Wells’s 1901 novel The First Men in the Moonwas Natarajan’s contribution: a fictional journey powered by the mysterious gravity-less mineral cavorite. Gormley, in his turn, recalled C. S. Lewis’s space trilogy that began with Out of the Silent Planet, in which a man travels the solar system pinned in a coffin.

Both influences emerge clearly enough in Lunatick, but the real star of the show isn’t fictional: it is the flyable lunar terrain wrestled into shape by Rodrigo Marques, Acute Art’s chief technology officer, from data sent back by NASA’s Lunar Reconnaissance Orbiter. “There’s something both moving and funny about skating over the surface of the moon,” says Gormley. “I’ve got very fond of skiing along the ridges then down into the crater bottoms.”

Gormley’s art is popular globally, not least because people find it easy to grasp. Never mind the cosmological and philosophical dimensions: what strikes the viewer is how he renders, in solid matter, the building blocks of our lives.

Gormley has been making sculptural art out of wireframes and voxels (three-dimensional pixels), even as architects and games designers having been moving away from model-making into a purely virtual 3D design space. “Until recently, I had no idea what a voxel was,” says Gormley, who has spent more than five years making oddly expressive low-resolution sculptures assembled from cubes and cuboids. His wireframe experiments (assembled from real wires and rods) are older still, dating back to the late 1990s.

Why has Gormley chosen to enter the virtual realm now? First, Lunatick was a chance to explore a medium that, he says, is “bloody useless at objects and bloody brilliant at space”. Objects, ultimately, are bodies: VR is hobbled because it can’t convey their mass and tactility. But space is different. We perceive space primarily through seeing, which means VR can convey scale and immensity to a sublime degree.

But why should an artist best known for exploring the sculptural possibilities of the human body (particularly his own) be keen on disembodied space? The image of body-as-spaceship crops up intermittently in Gormley’s work, but rarely so urgently. He says he is haunted by an image of long-haul flight, where the shutters are down and everyone is watching movies: virtual versions of human life.

“I want this piece to say to people, ‘Break out!’,” he says. “Of course we get very obsessed with human matters. But there are bigger affairs out there. Recognise your cosmic identity!”