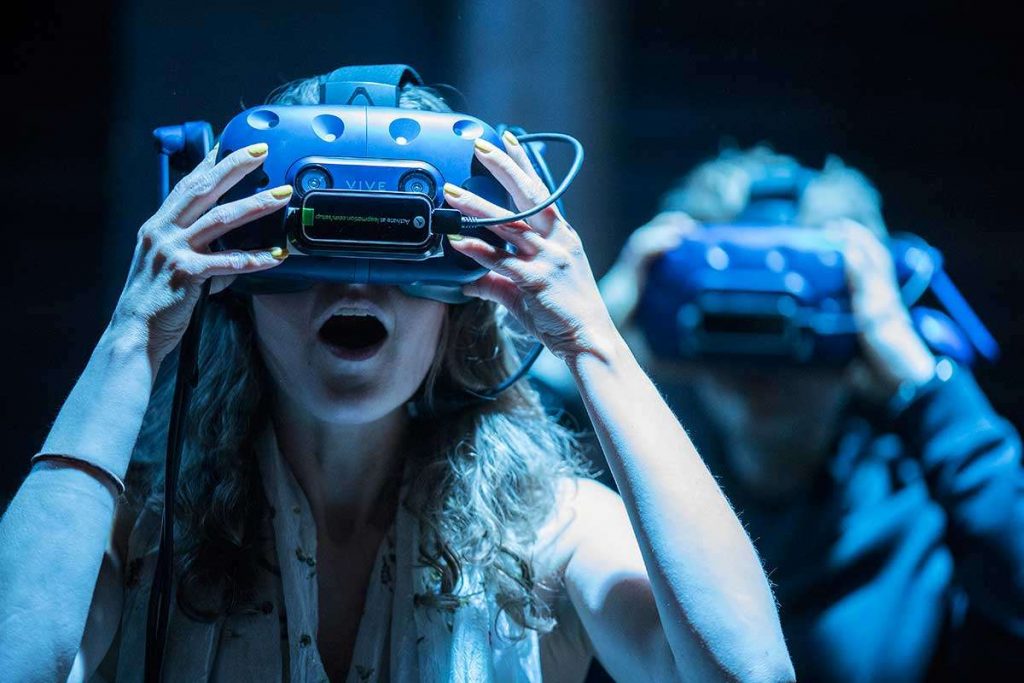 I interviewed Carl Guyenette, the creative intelligence behind The War Of The Worlds: The Immersive Experience, for New Scientist, 23 May 2019.

It’s six years since the Martian invaders succumbed to a microbial infection, leaving us once again in possession of our planet. Carl Guyenette has repaired to The Spirit of Man to raise a glass to Earth’s victory, and to take stock of his new production, a 100 minute-long immersion in Jeff Wayne’s The War of the Worlds.

The pub, which is part of the set and an integral part of the show, comes with its own meticulous backstory. On its walls, animated paintings record famous scenes from humanity’s first interstellar conflict. Remnants of Martian technology loom over the patrons. The effect is amusing for the first few minutes, but the aura of threat is unmistakable: pleasingly, the guts from one of the invaders’ war machines turn out to have been re-engineered to dispense gin.

Wayne’s musical retelling of H G Wells’s sci-fi shocker was released as a double album in 1978, and remains a hit, having sold over 2.5 million copies in the UK alone. There have been spin-offs a-plenty: video games, DVDs, stage shows, live tours. Nothing quite like this, though: “When I’ve been trying to explain this show to people,” says Guyenette, “I say it’s like walking into a cinema, except that once you’re there, you just keep on walking, into the screen. Into the movie itself.”

The full effect of Guyenette’s experiment in “layered reality” can only really be experienced at first hand. Nothing stays still, and neither does the audience, as it moves in groups of a dozen through over 2000 square metres of unlikely theatrical space – two floors of the old Metal Exchange in the City of London.

Visiting this venue mid-development, it had looked like somebody’s open-plan office: bad fluorescent lighting, grey carpet tiles; bins full of sandwich-shop litter; plastic water bottles in cardboard trays; laptops everywhere. Now, as the cast and crew set about unkinking the show’s phenomenally complicated logistics, the space is coming alive, fully dressed in both real and virtual light. Everything trembles. Everything moves, especially the air. Everything has a temperature. Everything has a smell.

Some of the experiences on offer in this show use VR headsets. Others use projection mapping. Some involve puppetry. Almost all manage to work in one of eight different holographic effects. Reality intrudes on the virtual world in unsettling and shocking ways. Things grab you – things you had thought were only in the headset. In VR, meanwhile, figures that seem to be fellow theatre-goers are plucked into the sky by Martian harvesting machines, their eyes meeting those of the participants (thanks to a neat eye-tracking algorithm) as they rise and perish.

Carl Guyenette talks about how he created the show.

New Scientist: What do they call you here?

Carl Guyenette: My job description’s a nuisance. When I called myself the CTO, the technologists on the show insisted I was actually the creative director. Then the creative people told me I’m a technologist. What I actually do is bring things together and makes new things out of them. So I suppose I’m an inventor.

NS: How did you come to work in theatre?

CG: I studied computer science, then joined the film visual effects industry, compositing for big Hollywood films. From there I moved on to making creative technological applications for the British Museum and other venues and festivals. I worked on Viens!, a virtual-reality piece by Michel Reilhac, which then went to Sundance and Cannes. This shot me into the centre of things. And now with the production company dotdotdot I’m trying to bring new media technologies and general audiences together through immersive theatrical experiences like this one. Not that we’ve worked at quite this scale before.

NS: Which of these new media are making the biggest impact on live performance at the moment?

CG: Projection mapping is really interesting. There are systems now that will project images and textures over objects even as you move them. This is edging us towards VR experiences that won’t require us to wear headsets. And there are domes which you can projection-map from the inside which give you immersive video experiences. There’s a massive one that is going up in Madison Square Garden in 2020 which has a capacity of around 20,000 people: that’s going to be fun!

NS: How did you select the technologies for War of the Worlds?

Stability was essential. Because we’re splitting the audience up into groups of a dozen, and leading them from set to set, and from experience to experience, we’re effectively putting on 70 shows a day. The bottom line is, you want to be using kit that doesn’t break or fall over, so we’re using the HTC Vive Pro. We try out more exotic machinery in our prototyping and experimental work — everything from Hololens to Magic Leap, which I’d dearly like to use in a theatrical setting. But augmented reality systems are still a generation behind VR in terms of stability.

NS: Even with a workhorse VR platform, you’ve been able to mix the real and the virtual in clever ways. Was achieving that mix always an important aspect of the production?

CG: More important for us was to make sure that the technologies worked well with the storytelling. At one point we place our audience in a small boat and set them afloat on a computer-generated sea. The graphics are just one element to the experience. The mechanisms that move the boat, the breeze, the drop in temperature: these elements are just as important. And timing’s the most vital element of all, not just to provide seamless experiences, but also to give the audience breathing space between experiences.

NS: A lot of the technology you’re using is old…

CG: I wanted this show to be an homage to old media: Pepper’s Ghost illusions, and zoopraxiscopes, pyrotechnics and animatronics. It’s a show set over a hundred years ago, after all, at the birth of photography and cinema. In The War of the Worlds, all these technologies feel new.

NS: VR was said to be a medium that would isolate us from each other but you’ve used it to create a social experience. Is this the future of VR?

CG: I think there’s still money to be made from the home VR market. But building something big, in a spacious venue, layering technologies together so you can let audiences do things they couldn’t do anywhere else, means that you can also add a social dimension to the experience. There are not many places where you can be with 12 people in the same room in VR, firing cannon at Martian invaders, fighting off tentacles, befriending and losing people as you struggle through a besieged city.