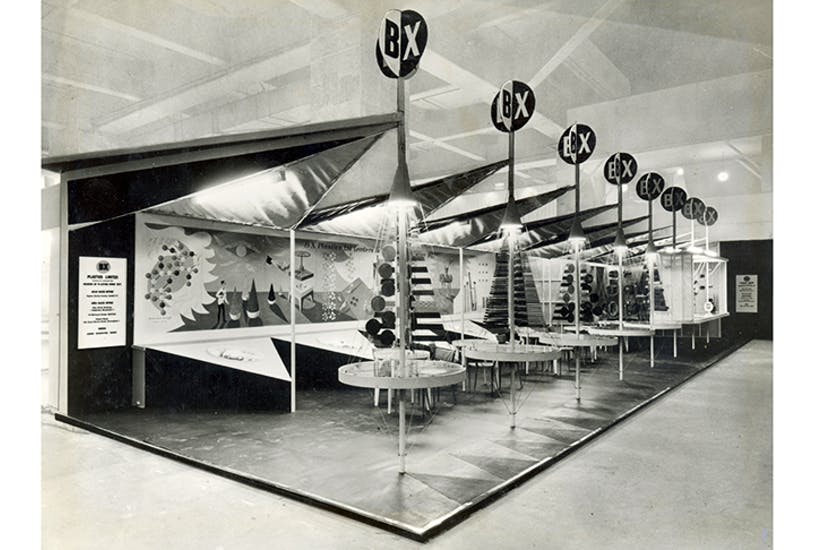 Plastics — even venerable, historically eloquent plastics — hardly draw the eye. As this show’s insightful accompanying publication (a snip at £3) would have it, ‘Plastics have no intrinsic form or texture, thus they are not materials that can be true to themselves.’ They exist within inverted commas. They can be shell-like, horn-like, stony, metallic — they do not really exist on their own behalf.

Mind you, the first vitrine in Raw Materials: Plastics at the Nunnery Gallery in east London contains an object of rare beauty: a small, mottled, crazed, discoloured sphere that looks for all the world like the planet Venus, reduced to handy scale.

It’s a billiard ball, made of the first plastic: cellulose nitrate. Its manufacture had been keenly anticipated. In the US, a $10,000 prize had been offered for anything that could replace ivory in the manufacture of billiard balls (and no wonder: a single tusk yields only three balls).

Under various brand names (Celluloid, Parkesine, Xylonite), and in spite of its tendency to catch fire (colliding snooker balls would occasionally explode), cellulose nitrate saved the elephant. And not just the elephant: plastics pioneer John Wesley Hyatt reckoned that ‘Celluloid [has] given the elephant, the tortoise, and the coral insect a respite in their native haunts; and it will no longer be necessary to ransack the earth in pursuit of substances which are constantly growing scarcer.’

The whole point of plastic is that it has no characteristics of its own, only properties engineered for specific uses. Cheaper than jade. Less brittle than bone. It’s the natural material of the future, always more becoming than being. Hence the names: Xylonite. Bexoid. Halex. Lactoid.

Unable to nail the material in words, one writes instead about its history, sociology, industrial archaeology or ecological impact. On remote islands in the Pacific, thousands of albatross chicks are starving because the parents mistake floating plastic debris for food. Stories like this conjure up a vision of vast islands of discarded plastic coagulating in the Pacific Ocean, but there aren’t any. Instead, plastics eventually fragment into ever smaller pieces that are ingested by marine animals and carried to the sea bottom. In the Mariana Trench, all crustaceans tested had plastics in their guts. So plastics rise and fall through the food chain, creating havoc as they go — a bitter irony for a material that saved the elephant and the turtle, made fresh food conveyable and modern medicine possible, and all for less than 15 per cent of global oil consumption.

What can be gained from looking at the stuff itself? Raw Materials: Plastics transcends the limitations of its material by means of a good story. The first plastics were made in the Lea Valley, not from crude oil, but from plant materials, in a risky, artisanal fashion that bore, for a while, the hallmarks of older crafts including baking, woodcutting and metalwork. Fast-forward 140 years or so and, under the umbrella term ‘bioplastics’, plant-based and biodegradable synthetic products promise to turn the wheel of development full circle, returning plastics to their organic roots. (Designer Peter Marigold’s FORMCard plastic, used here in an excellent school art project, is a starch-based bioplastic made from potato skins.) Then, perhaps, we can break the bind in which we currently find ourselves: the one in which we’re poisoning the planet with plastic in our efforts not to further despoil it.

This is the third and for my money the most ambitious of the gallery’s ongoing series of small, thoughtful exhibitions about the materials, processes and industries that have shaped London’s Lea Valley. (Raw Materials: Wood ran in 2017; Raw Materials: Textiles last year.) The show is more chronicle than catalogue, but the art, scant as it is, punches above its weight.

I was struck, in particular, by France Scott’s ‘PHX [X is for Xylonite]’, a 13-minute collage of photogrammetry, laser scanning and 16mm film. It ought, by all logic, to be a complete mess and I still haven’t been able to work out why it’s so compelling. Is it because digital artefacts, like their plastic forebears, are themselves prisoners of contingency, aping the forms of others while stubbornly refusing to acquire forms of their own?