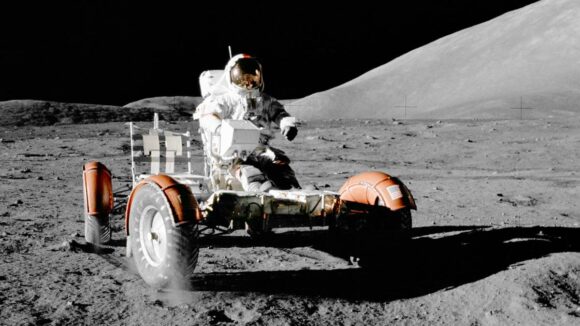 Reading Across the Airless Wilds by Earl Swift for the Times, 7 August 2021

There’s something about the moon that encourages, not just romance, not just fancy, but also a certain silliness. It was there in spades at the conference organised by the American Rocket Society in Manhattan in 1961. Time Magazine delighted in this “astonishing exhibition of the phony and the competent, the trivial and the magnificent.” (“It’s wonderful what a kid can do with an Erector Set”, one visiting engineer remarked.)

But the designs on show thefre were hardly any more bizarre than those put forward by the great minds of the era. The German rocket pioneer Hermann Oberth wrote an entire book advocating a moon car that could, if necessary, pogo-stick about the satellite. When Howard Seifert, the American Rocket Society’s president, advocated abandoning the car and preserving the pogo stick — well, Siefert’s “platform” might not have made it to the top of NASA’s favoured designs for a moon vehicle, but it was taken seriously.

Earl Swift is not above a bit of fun and wonder, but the main job of Across the Airless Wilds (a forbiddingly po-faced title for such an enjoyable book) is to explain how the oddness of the place — barren, airless, and boasting just one-sixth Earth’s gravity — tended to favour some very odd design solutions. True, NASA’s lunar rover, which actually flew on the last three Apollo missions, looks relatively normal, like a car (or at any rate, a go-kart). But this was really to do with weight constraints, budgets and historical accidents; a future in which the moon is explored by pogo-stick is still not quite out of the running.

For all its many rabbit-holes, this is a clear and compelling story about three men: Sam Romano, boss of General Motors’s lunar program, his visionary off-road specialist Mieczyslaw Gregory Bekker (Greg to his American friends) and Greg’s invaluable engineer Ferenc (Frank) Pavlics. These three were toying with the possibility of moon vehicles a full two years before the US boasted any astronauts, and the problems they confronted were not trivial. Until Bekker came along, tyres, wheels and tracks for different surfaces were developed more or less through informed trial and error. It was Bekker who treated off-roading as an intellectual puzzle as rigorous as the effort to establish the relationship between a ship’s hull and water, or a plane’s wing and the air it rides.

Not that rigour could gain much toe-hold in the early days of lunar design, since no-one could be sure what the consistency of the moon’s surface actually was. It was probably no dustier than an Earthbound desert, but there was always the nagging possibility that a spacecraft and its crew, landing on a convenient lunar plain, might vanish into some ghastly talcum quicksand.

On 3 February 1966 the Soviet probe Luna 9 put paid to that idea, settling, firmly and without incident, onto the Ocean of Storms. Though their plans for a manned mission had been abandoned, the Soviets were no bit player. Four years later it was an eight-wheel Soviet robot, Lunokhod-17, that first drove across the moon’s surface. Seven feet long and four feet tall, it upstaged NASA’s rovers nicely, with its months and miles of journey time, 25 soil samples and literally thousands of photographs.

Meanwhile NASA was having to re-imagine its Lunar Roving Vehicle any number of times, as it sought to wring every possible ounce of value from a programme that was being slashed by Congress a good year before Neil Armstrong even set foot on the Moon.

Conceived when it was assumed Apollo would be the first chapter in a long campaign of exploration and settlement, the LRV was being shrunk and squeezed and simplified to fit through an ever-tightening window of opportunity. This is the historical meat of Swift’s book, and he handles the technical, institutional and commercial complexities of the effort with a dramatist’s eye.

Apollo was supposed to pave the way for two-rocket missions. When they vanished from the schedule, the rover’s future hung in doubt. Without a second Saturn to carry cargo, any rover bound for the moon would have to be carried on the same lunar module that carried the crew. No-one knew if this was even possible.

There was, however, one wedge-shaped cavity still free between the descent stage’s legs: an awkward triangle “about the size and shape of a pup tent standing on its end.” So it was that the LRV, tht once boasted six wheels and a pressurised cabin, ended up the machine a Brompton folding bike wants to be when it grows up.

Ironically, it was NASA’s dwindling prospects post-Apollo that convinced its managers to origami something into that tiny space, just a shade over seventeen months prior to launch. Why not wring as much value out of Apollo’s last missions as possible?

The result was a triumph, though it maybe didn’t look like one. Its seats were basically deckchairs. It had neither roof, nor body. There was no steering wheel, just a T-bar the astronaut lent on. It weighed no more than one fully kitted-out astronaut, and its electric motors ground out just one horsepower. On the flat, it reached barely ten miles an hour.

But it was superbly designed for the moon, where a turn at 6MPH had it fishtailing like a speedboat, even as it bore more than twice its weight around an area the size of Manhattan.

In a market already oversaturated with books celebrating the 50th anniversary of Apollo in 2019 (many of them very good indeed) Swift finds his niche. He’s not narrow: there’s plenty of familiar context here, including a powerful sketch of the former Nazi rocket scientist Wernher von Braun. He’s not especially folksy, or willfully eccentric: the lunar rover was a key element in the Apollo program, and he wants it taken seriously. Swift finds his place by much more ingenious means — by up-ending the Apollo narrative entirely (he would say he was turning it right-side up) so that every earlier American venture into space was preparation for the last three trips to the moon.

He sets out his stall early, drawing a striking contrast between the travails of Apollo 14 astronauts Alan Shepard Jr and Edgar Mitchell — slugging half a mile up the the wall of the wrong crater, dragging a cart — with the vehicular hijinks of Apollo 15’s Dave Scott and Jim Irwin, crossing a mile of hummocky, cratered terrain rimmed on two sides by mountains the size of Everest, to a spectacular gorge, then following its edge to the foot of a huge mountain, then driving up its side.

Detailed, thrilling accounts of the two subsequent Rover-equipped Apollo missions, Apollo 16 in the Descartes highlands and Apollo 17 in the Taurus-Littrow Valley, carry the pointed message that the viewing public began to tune out of Apollo just as the science, the tech, and the adventure had gotten started.

Swift conveys the baffling, unreadable lunar landscape very well, but Across the Airless Wilds is above all a human story, and a triumphant one at that, about NASA’s most-loved machine. “Everybody you meet will tell you he worked on the rover,” remarks Eugene Cowart, Boeing’s chief engineer on the project. “You can’t find anybody who didn’t work on this thing.”