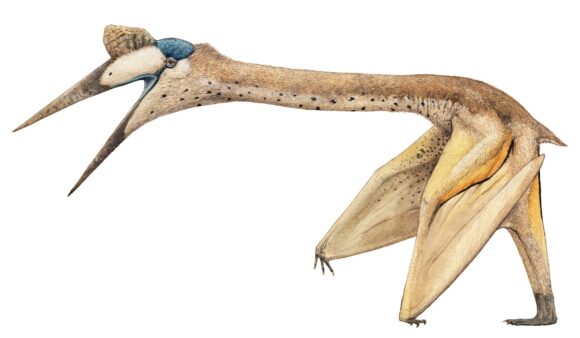 Reading Thomas Halliday’s Otherlands: A world in the making for the Telegraph, 5 February 2022

Earlier books have painted tableaux of life at other epochs, but few ever got the scale right. Thomas Halliday’s visions are monstrous.

Halliday is a paleoecologist. That’s a branch of biology, which in turn has become a troublesome cousin of physics, borrowing its technology as it penetrates the living machineries of heritability and development. “My own scientific work,” writes Birmingham-based researcher Thomas Halliday, “has mostly happened in basement museum collections and within computer algorithms, using shared anatomical features to try and work out the relationships among the mammals that lived in the aftermath of the last mass extinction.”

But Halliday is also a child of Rannoch — that glacier-scoured landscape of extinct volcanoes that dominates Scotland’s central highlands. And anyone familiar with that region will see instinctively how it underpins this epic near-hallucinatory natural history of the living earth.

Otherlands works backwards through the history of life, past the icebound Pleistocene 20,000 years ago and the Chicxulub asteroid strike 66 million years ago, past the deeply weird Triassic and the lush Devonian, all the way back to the first stirrings of multicellular life in the Ediacaran, 550 million years ago.

Many readers will come for the jump-scares. The paleocene Mesodma, which looks like a rodent until it opens its mouth, revealing a terrifying notched tooth, as though a buzzsaw were buried in its gum. The Gigatitan, a Triassic forerunner of the grasshopper, whose stridulations generate a bullfrog-like baritone song. The Tully Monster, the herring of the Carboniferous, with a segmented torpedo body, two rippling squid-like tail fins and at the front, “something like the hose of a vacuum cleaner, with a tiny tooth-filled grabbing claw at its end”.

Halliday weaves these snapshots of individual plants and animals into a vision of how carbon-based life continually adapts to its shifting, spinning home. It’s a story that becomes increasingly uncanny as it develops, as how could it not? In the normal course of things, we only ever get to see a single snapshot from this story, which is governed by rules that only start to make sense in geological time.

Anyone who’s looked at a crab feeding — a wriggling mass of legs that are tongues that are teeth — will not be surprised to learn that arthropods are the Swiss Army knives of the animal world, “with each segment containing a flexible, jointed appendage that can be adapted to a huge variety of functions.” But arthropods are weird-looking to begin with.

It’s when the cuddly end of nature starts to morph that the flesh begins to creep. In Gargano, that was once an island in the Mediterranean, home to dwarf elephants, giant swans and metre-long barn owls, we learn that everything on an island tends towards one particular size.

In the cold, though, this process goes into reverse. Getting big means your bulk can keep you warm for longer. Getting small means you can hibernate. Seymour Island in Antarctica, in the Eocene, boasted much wildlife, but nothing in size between a rabbit and a sheep.

So far, so Alice-like. More unnerving are the ways in which living things, quite unrelated, converge to exploit similar settings. The pangolins of Africa and South Asia are more closely related to humans than they are to South American armadilloes. At first glance, though, you’d be hard pressed to tell these two animals apart.

If nature fitted together neatly, this sort of thing might not seem so disquieting. But things don’t fit together. There is no balance, just a torrent of constant change, and plants and animals lost in its eddies. When threatened, the slow loris raises its arms up behind its head, shivers and hisses. Why? Because it’s trying to look like a cobra, though the ranges of slow loris and cobra haven’t overlapped in tens of thousands of years.

Slowly, but very surely, the the six-metre long sea serpents of the Triassic come to see almost benign next to the Giant Dormouse or Terrible Moon-Rat which, in their uncanny resemblance to familiar animals, remind us that we humans, too, are clay moulded by time.

In the story of life on Earth, the activities of Homo sapiens are an eyeblink. We’re a sudden, short-lived, energetic thing, like a volcanic eruption, like a rock from space. It doesn’t really matter what they are, or whether they take a split-second, a couple of hundred years, or a few thousand years to wreak their havoc. Sudden energetic things destroy.

But rather than fall into the contemporary cliche and attempt to conjure up some specious agency for us all — “you too are a governor of the planet!” — Halliday engages us as Victorian writers once did, filling us with wonder, not anxiety — and now with added nuance, and better evidence to hand. The chapter “Deluge”, on the filling of the Mediterranean basin in the Miocine, and the chapter “Cycles” describing Eocene polar rainforests, were personal favourites, dazzling me to the point where I wondered, dizzily, how accurate these visions might be.

I don’t mean that Halliday has taken short cuts. On the contrary: the story he tells is handsomely evidenced. I mean only that his story will eventually date. Not far from where I live, Benjamin Waterhouse Hawkins sculpted the first full-scale representations of dinosaurs, setting them in a landscape designed by Joseph Paxton, for the delectation of visitors to the Crystal Palace, once it relocated near Penge.

People now point and titter at Hawkins’s inaccuracies — the horn on one beast turns out to be the thumb belonging to another and so on — but what’s really staggering is how accurate his models are, given the evidence available at the time.

Halliday stands on the shoulders of Hawkins and other giants. He knows about dinosaur coloration, and dinosaur vision (they could see into the ultra-violet). He can trace the wax on fossilised leaves, and tell you how the seasons worked, and about the prevailing winds. He can trace our ancient insectivorous past through genes we all carry that code for digesting chitin. Picking among countless recent discoveries, he can even tell you how four-limbed flying pterosaurs came in to land (“hind-feet first, a jump, skip and hop to a stop”).

I wonder what Halliday cannot yet know?

As the author says, “Nothing provokes debate quite like the hunting of monsters.”