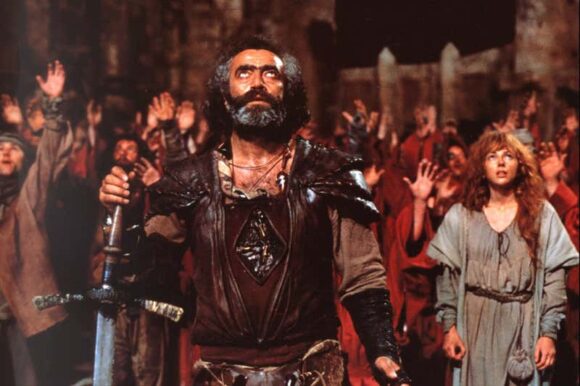 The scrabble for dominance in streaming video continues to heat up. As I write this, Paramount has decided to pull season 4 of Star Trek Discovery from Netflix and screen it instead on its own platform, forcing die-hard fans to shell out for yet another streaming subscription. Amazon has canceled one Game of Thrones spin-off to concentrate on another, House of the Dragon, writing off $30,000,000 in the process. And Amazon’s Lord of the Rings prequel, set millennia before the events of The Hobbit, is reputed to be costing $450,000,000 per series — that’s five times as much to produce as Game of Thrones.

All this febrile activity has one unsung benefit for viewers; while the wheels of production slowly turn, channel programmers are being tasked with finding historical material to feed our insatiable demand for epic sci-fi and fantasy. David Lynch’s curious and compelling 1984-vintage Dune is streaming on every major service. And on Amazon Prime, you can (and absolutely should) find Peter Fleischmann’s 1989 Hard to Be A God, a West German-Soviet-French-Swiss co-production based on the best known of the “Noon Universe” novels by Soviet sf writers Arkady and Boris Strugatsky.

In the Noon future (named after the brothers’ sci fi novel Noon: 22nd Century) humankind has evolved beyond money, crime and warfare to achieve an anarchist techno-utopia. Self-appointed “Progressors” cross interstellar space with ease to guide the fate of other, less sophisticated humanoid civilisations.

It’s when earnest, dashing progessors land on these benighted and backward worlds that their troubles begin and the ethical dilemmas start to pile up.

In Hard to be a God Anton, an agent of Earth’s Institute of Experimental History, is sent to spy on the city of Arkanar which is even now falling under the sway of Reba, the kingdom’s reactionary first minister. Palace coups, mass executions and a peasant war drive Anton from his position of professional indifference, first to depression, drunkenness and despair, and finally to a fiery and controversial commitment to Arkanar’s weakling revolution.

So far, so schematic: but the novel has a fairly sizeable sting in its tale, and this is admirably brought to the fore in Fleischmann’s screenplay (co-written with Jean-Claude Carriere, best known for his work with Luis Bunuel).

Yes, progressors like Anton have evolved past their propensity for violence; but in consequence, they have lost the knack of ordinary human sympathy. “The working conditions one has to put up with here!” complains Anton’s handler, fighting with a collapsible chair while, on the surveillance screen behind him, Reba’s inquisition beats a street entertainer nearly to death.

Anton — in an appalled and impassioned performance by the dashing Polish actor Edward Zentara — comes at last to understand his advanced civilisation’s dilemma: “We were able to see everything that was happening in the world,” he tells an Ankaran companion, breaking his own cover as he does so. “We saw all the misery, but couldn’t feel sympathy any more. We had our meals while seeing pictures of starving people in front of us.”

Anton’s terrible experiences in strife-torn Ankara (where every street boasts a dangling corpse) do not go unremarked. Earth’s other progressors, watching Anton from orbit, do their best to overcome their limitations. But the message here is a serious one: virtue is something we have to strive for in our lives, not a state we can attain as some sort of birthright.

Comparable to Lynch’s Dune in its ambition, and far more articulate than that cruelly cut-about effort, Fleischmann’s upbeat but moving Hard to be a God reminds us that cinema in the 1980s set later sci-fi movie makers a very high bar indeed. We can only hope that this year’s TV epics and cinema sequels take as much serious effort over their stories as they are taking over their production design.