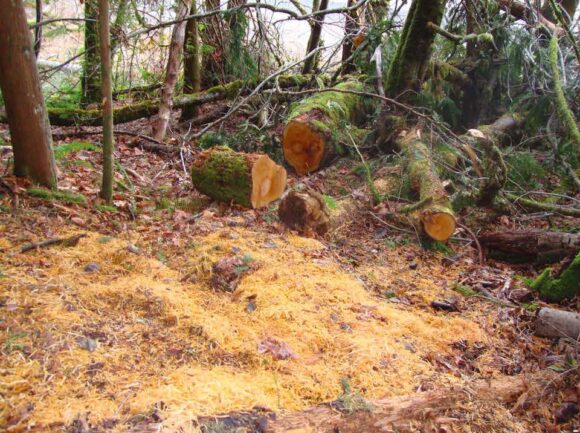 Reading Lyndsie Bourgon’s Tree Thieves: Crime and Survival in the Woods for the Telegraph, 12 July 2022

Worldwide, the illegal timber trade is worth around 157 billion dollars a year. According to oral historian Lyndsie Bourgon, thirty per cent of the world’s wood trade is illegal, and around 80 per cent of all Amazonian wood harvested today is “poached” (a strange term to apply to timber, which would struggle to fit into the largest poche or pocket — but evocative nonetheless). $1 billion worth of wood is poached yearly in North America.

Bourgon focuses her account on thefts from public lands and forest parks of the Pacific North-West. There are giants here, and Methuselahs. “Old-growth” trees, more than two hundred years old, are intagliated with each others’ root systems, with fungal hyphae and with other soil systems we’ve barely begun to understand. Entire ecosystems may stand or fall on the survival of a single 800-year-old red cedar — an organism so huge it may take weeks or months to saw up and remove from the forest, leaving a trail of sawdust, felling wedges and abandoned equipment.

That the trade in such timber was not sustainable has never been a secret, and to save some of the world’s oldest and biggest trees, the Redwood National Park was established in 1968.

But while the corporations received compensation for their lost profits, the promised direct government relief for workers never materialised. “Do you know what it’s like to work 20 years, then sleep in a pick-up truck?” asked Seattle’s archbishop Thomas Murphy, at a 1994 summit attended by the new president, Bill Clinton; “A way of life is dying.”

North America’s oldest timber companies were founded near the town of Orick, on the banks of the Redwood Creek in Humboldt County, California. Orick’s first commercial sawmill opened in 1908. Orick is now home to just under 400 people. You wouldn’t stop here for gas on your way to a luxury cabin on US Forest Service land, or a heated yurt by Park Canada.

To live in Orick is to feel the walls closing in: one woodsman turned poacher, Danny Garcia, likens the sensation “to having your car break down in the middle of nowhere — you’ve no cash to fix it and no way out.”

This, says Garcia, is where his “tree troubles” started, but he wasn’t the first to go sawing chunks out of giants. His partner in crime Chris Guffie says: “I’ve been at it for so doggone long. It’s like Yogi Bear and the park ranger.”

“To begin to understand the sadness and violence of poaching,” says Bourgon, “we need to consider how a tree became something that could be stolen in the first place.” Like it or not, conservation has patrician roots: in the 1890s, organisations like the New York Sportsmen’s Club lobbied to ensure access to game and fish for its members. Dedicated hunting and fishing seasons suited their sporting clientele, but as a letter to a Wyoming paper put it: “When you say to a ranchman, ‘You can’t eat game, except in season,’ you make him a poacher, because he is neither going hungry himself nor have his family do so…”

Remove land from a community, Bourgon argues, and you make poaching “a deed of necessity”. So why not buy the land and give it back to its people, along with the tools to protect and manage it. Going by the experiences of the 59 community forests that now dot the province of British Columbia, community forests create twice as many jobs as those run by independent industry.

Of necessity, however, Bourgon spends more pages explaining the workings of a solution more palatable to central authority: an ever-more interconnected system of police surveillance, involving cameras, magnetic plates, LIDAR and, most recently, genetic testing. Even as Bourgon wrote this book, a genetic map was being assembled to make wood products, at least in the Pacific North-West, traceable to their original growing locations. The brilliance of this effort, spearheaded by Rich Cronn at the Oregon State University at Corvallis, cannot hide the fact that it is facilitating an age-old mistake: substituting enforcement for engagement.

Bourgon gives a voice both to the rangers risking their lives to save some of the planet’s oldest trees, and to poachers like Danny Garcia whose original sin was his unwillingness to leave the home of his ancestors. Full of the most varied testimonies, and by no mean fudging the issue that timber poaching is a crime and an environmental violation, Tree Thieves nonetheless testifies to the love of the woodsman for the wood. Drive through Orick sometime, and you will discover that communities are an ecology, too, and one worthy of care.