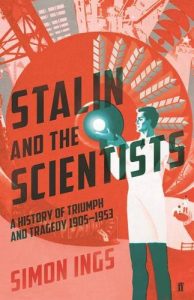 Longlisted for the Baillie Gifford Prize for Non-Fiction 2016

Scientists throughout history, from Galileo to today’s experts on climate change, have often had to contend with politics in their pursuit of knowledge. But in the Soviet Union, where the ruling elites embraced, patronized, and even fetishized science like never before, scientists lived their lives on a knife edge.

The Soviet Union had the best-funded scientific establishment in history. Scientists were elevated as popular heroes and lavished with awards and privileges. But if their ideas or their field of study lost favour with the elites, they could be exiled, imprisoned, or murdered. And yet they persisted, making major contributions to 20th century science.

Stalin and the Scientists tells the story of the many gifted scientists who worked in Russia from the years leading up to the Revolution through the death of the “Great Scientist” himself, Joseph Stalin. It weaves together the stories of scientists, politicians, and ideologues into an intimate and sometimes horrifying portrait of a state determined to remake the world.

In Stalin and the Scientists, Simon Ings has produced one of the finest, most gripping surveys of the history of Russian science in the twentieth century. Deeply researched and written with a sense of burning importance, Ings’ book ranges widely from politics to philosophy, from economics to biography to recount the monumental successes of Russian scientists and the Soviet state’s Mephistophelean embrace of the scientific community. It is a fascinating work that both inspires and terrifies.
—Douglas Smith, author of Former People: The Final Days of the Russian Aristocracy

His storytelling skill is everywhere evident; the book — which was longlisted last week for the Baillie Gifford prize for nonfiction — is lively, dramatic, intriguing and often very funny. Ings also has a wonderful ability to explain complex notions.
–Gerard DeGroot, The Times, 1 October 2016

His monumental chronicle follows hordes of brilliant scientific chancers who welded their talents to the fledgling union, only for many to ‘disappear’ into the gulags, or mentally atrophy under the leaden hand of bureaucracy. Ings ably tweezers the discoveries and disasters out of this political train-wreck.
—Barbara Kiser, Nature, 29 September 2016

By bringing back to life the tragic careers of many a Soviet scientist – Vavilov, Michurin, Kapitsa, Korolev and Vernadsky, to name just a few – Ings shows clearly that although fear of the tyrant can trigger a certain degree of conformist creativity, it eventually backfires and becomes not just scientifically counterproductive, but perilous and even lethal… a 100 per cent brilliant book.
—Vitali Vitaliev, Engineering & Technology, 18 October 2016

With fiction in mind, William Styron once said that a great book should leave you with many experiences, and slightly exhausted at the end. The same is true of the finest non-fiction, and Simon Ings’ Stalin And The Scientists is a great book. Titles can be misleading, and this is not another biographical perspective on the Soviet dictator, but rather a vast tapestry of Russian history from the mid-19th century, when many of the scientists who feature were born, to after Stalin’s death.
—Vin Arthey, The Scotsman, 26 October 2016

[An] ambitious … thoroughly researched book … the discussion is well informed and lively, with clear explanations for the general reader of the scientific (and ideological) issues involved.
Evan Mawdsley, BBC History Magazine

Ings conveys the tragedy and the triumph of science in the Soviet Union, though the tragedy outweighs the triumph in his account. A different choice, with more emphasis on physics and mathematics, would have tilted the balance more toward triumph. Ings is interested in people, their characters, choices and the positions they found themselves in, and he succeeds in bringing out their personalities. This is a fascinating story of brilliant scientists and charlatans, of visionaries and careerists, of civic courage and moral cowardice. The author explains the scientific issues in a clear and simple way, so that the reader is aware of the issues at stake. He does not use Russian-language sources, but he makes extensive use of the large English-language literature on the subject.
—David Holloway, Guardian, 29 December 2016

This book was waiting to be written. In the mid-20th century the Soviets competed with, and frequently bettered, Western science. They put rockets into space, built nuclear weapons and pursued novel scientific research on an unprecedented scale, creating whole scientific disciplines in the process. By Stalin’s death in 1953 the Soviet Union was the largest and best-funded scientific establishment in history. Yet this is the first comprehensive survey in English.
—Barnes Martin, The Oldie, December 2016

In Stalin and the Scientists, Simon Ings, culture editor at New Scientist (UK), very effectively relates a set of stories—compelling, often horrifying, sometimes both at once—of the most singular period in the history of Russian science. Singular, but nevertheless firmly anchored in pre-Stalinist Russian history and reaching into the future, too. To get full value from the book, readers would ideally take it together with Vucinich’s volumes and the mainly post-Stalinist Manipulated Science by the Russian scientific journalist Mark Popovsky, who observed at first hand much of what it reports.
—Aileen M. Kelly, American Scholar, 5 December 2016

[Ings] is a gifted writer. Stalin and the Scientists is a good single source for anyone approaching Soviet science for the first time.
—Loren Graham, Wall Street Journal, 20 February 2017

Ings is an entertaining storyteller who often captures the essence of things — Stalin was indeed “the last in a long line of European philosopher kings.” Filled with priceless nuggets and a cast of frauds, crackpots and tyrants, this is a lively and interesting book, and utterly relevant today when the Trump administration is challenging the scientific establishment on climate change. We in the West have long laughed at the “Coryphaeus of Science,” but has the United States now elected its own?
—Simon Sebag Montefiore, New York Times, 27 February 2017

Ings’s finely crafted and informative book is a must read for understanding how the ideas of scientific knowledge and technology were distorted and subverted for decades across the Soviet Union, all in the service of the most ambitious experiment in social engineering the world has ever witnessed.
—J.P. O’Malley. Washington Post, 17 March 2017

“a dazzling, often astonishing prism through which to view the Soviet experiment”
—Peter Pomeranzev