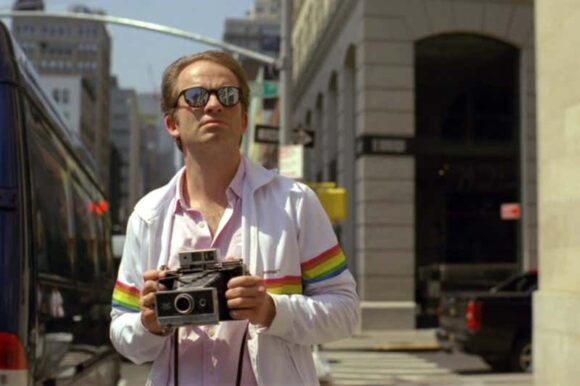 Jens Meurer is a hard figure to pin down. As a producer he’s seen major mainstream movies like Black Book (2006) and Rush (2013) to the big screen; the European Academy named him ‘documentary filmmaker of the year’ in 1995; he’s also quite prepared to spend months following in the wake of an eccentric Viennese entrepreneur who’s convinced that the future of technology is analogue, or at any rate post-digital — a strange and hard to monetize mash-up of the two, perhaps.

An Impossible Project is Meurer’s passion project about Florian Kapps (everyone calls him “Doc” on account of his working studying the eye muscles of spiders). Though he can never be too sure how to meet next month’s bills, Kapps nonetheless moves in interesting circles. We follow him around Berlin, New York and Menlo Park, and say goodbye to him as he’s hosting a dinner party for “analogue champions” including higher-ups in Moleskine, Polaroid and Facebook (yes, Facebook: it has an analog research lab) in a mothballed (hence wholly analogue) grand hotel just outside Vienna.

Kapps is a one-man cultural revolution. He bought the last surviving Polaroid factory in 2008, just before it was due to be demolished. He got it running again, only to discover that several chemicals needed to make Polaroid’s signature instant-developing film were no longer in production. That film was “the most chemically complicated man-made product ever,” claims Steve Herchen a former Polaroid product manager. Early attempts to replicate the original formula were, in Kapps’s memorable phrase, “perfect in a special way” (the colours were wildly unreliable; half the time the image would melt off the backing).

Still, Kapps persevered. He reckoned analogue technology has an irresistible mystique; that if he rebuilt the technology, new customers would appear. And he was right: Impossible, the company he founded, now bears the Polaroid name and sells a million instant films a year. Kapps, though, is a dreamer, not a manager, and Impossible’s board had long since kicked him out.

It is hard to feel too sorry for him. His subsequent ventures in analogue — including a museum-cum-bar-cum-store in Vienna called Supersense — address, in a much more direct and personally satisfying fashion, his scattergun delight in goods you can touch and smell, and machines you can hear working and can take apart and understand. Kapps curates analogue printing machinery, recording equipment, cameras and telephones. All the machines work, and those that are for sale, sell quickly. Every few weeks he traipses across Austria in search of just the right meats to serve in his cafe. After hours he uses his shop floor to stage concerts that are cut straight to vinyl, creating one-of-a-kind records of live events. David Bohnett, creator of Geocities and one of Silicon Valley’s first millionaires, reckons Kapps is inventing a whole new class of luxury item — unique records of unique experiences. Is he right?

People under 25 seem to think so. It’s this cohort, who grew up in a digital world, who are Kapps’s most eager customers. Kapps believes a monotonously digital diet has starved them of sensory pleasure, and that “after a long period of analogue companies trying hard to become digital, it’s now time for the digital companies to start thinking how to connect with people in analogue ways.”

An Impossible Project is a highly ingenious movie. Meurer has gone to extraordinary lengths to portray the man who saved Polaroid in a film that captures that casual, magical, slightly unreliable Polaroid feel. It’s informal. Practically every take looks like an outtake. People grin at the camera as if they’ve never seen a camera before. The shots don’t seem particularly well framed, and yet they add up to an extraordinarily beautiful film. And the colours are gorgeous.