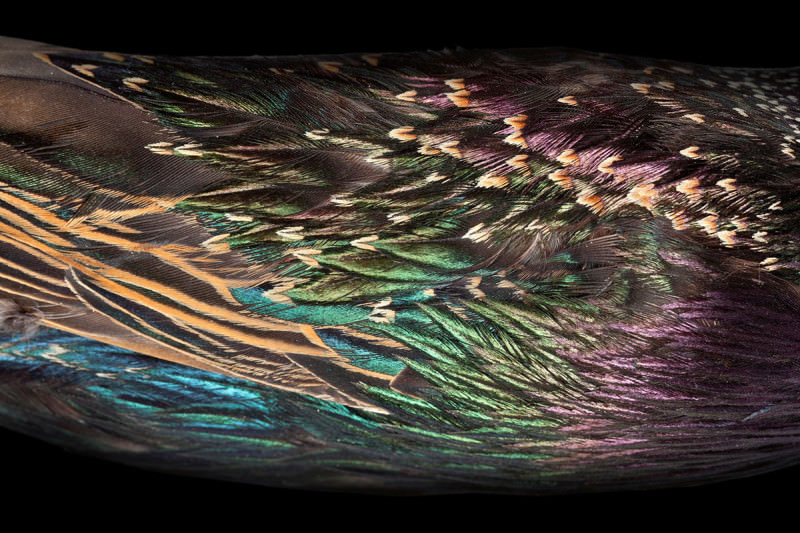 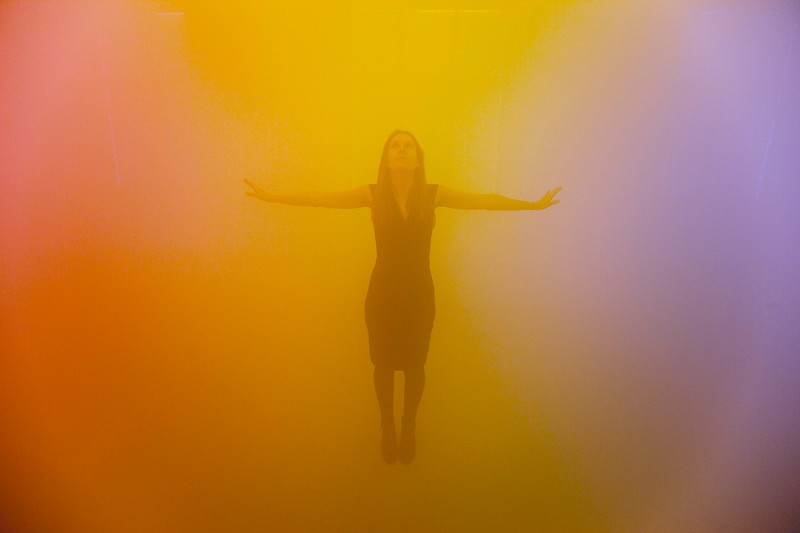 Three bands of light – one pink, one yellow, one blue – illumine the obliterating smog that artist Ann Veronica Janssens has used to fill the Wellcome Collection’s first-floor gallery. This white-floored, white-walled, white-ceilinged room is trying very hard to disappear.

There’s no directionality to the light here, so there is no sense of up or down. Your first sensation is not so much of falling as of leaning, or rather, of being leant, like a roll of carpet propped against a wall. This sensation, that you are suddenly operating out of kilter with the real geometry of the world, does not go away.

I’m not alone in here. The other explorers are just about visible as they come within braking distance of me. The walls are another matter. The light reflected off the smog and the light reflected off the walls are indistinguishable. The walls may as well be made of glass for all that you can see them. Hitting one, I turn and move forward, running a finger along the hard surface to keep my orientation – and promptly bump my nose on another wall.

All the time I’ve been thinking I’m staring into the void, I’ve actually been staring into a corner. I turn around to face into the room. At least, I think I do.

The room is a rainbow of mist. You step through an airlock arrangement into pink mist. If you walk straight ahead you will shortly pass through a yellow murk and into a blue cloud.

Those loose synonyms – mist, murk and cloud – aren’t just there to get what might have been a repetitive sentence past the subeditor. They have significance.

The pink zone is a true smog, the one that most obviously messes with your perceptions. It feels profoundly, viscerally wrong – faux psychoanalytical explanations of being trapped in a womb seem irresistible.

The pink zone robs me of things to see, and also of the actual sensation of seeing. I am made painfully aware of the floaters scudding over my eyeball. It’s probably best to avoid this show when you’re recovering from the night before.

The yellow middle zone is a queasy, transitional space, that seems to shift depending on whether I approach it from the blue end of the room or the pink end. I find it hard to stop here.

In the blue zone, in contrast to the pink zone, it is virtually impossible for me to imagine that I cannot see. There’s still nothing around me, but the nothing feels familiar and natural. I’m walking on air. What could possibly go wrong? As I think this, I stub my toe: another wall. 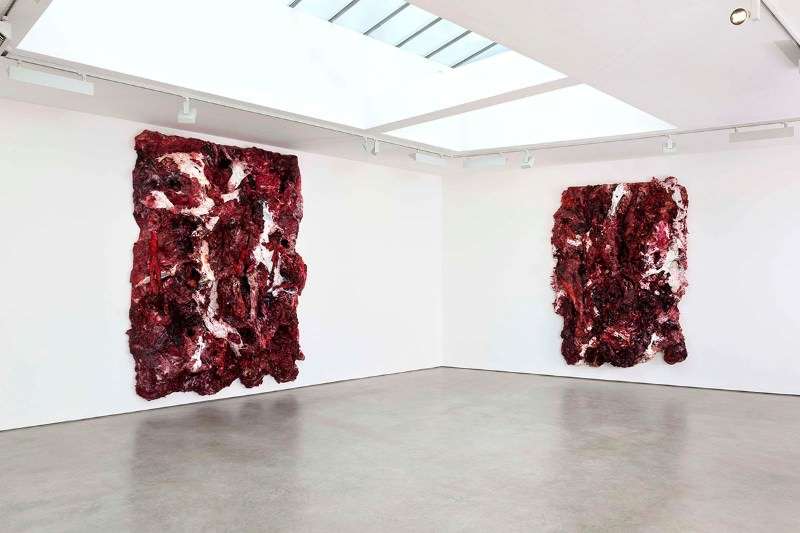 An interview with the sculptor Anish Kapoor for New Scientist.

I have said this over and over again: you make what you make, and you put it in front of yourself first of all. Inevitably, a certain concept arises, and exploring that concept is the real work. If I started off with some big message for the world, it would keep getting in the way.

There is an emotional world and an objective world, and the two mesh. Thirty years ago I began working with the idea that for every material thing, there’s a non-material thing alongside it – sometimes poetic, sometimes phenomenological. For example, I once made a stone chamber and painted it a very dark blue. Thanks to the psychological implications of the colour, if you look inside the chamber it’s as though this stone thing had a non-thing inside it. The cavity becomes an object. You get an effect like that when you look at a polished concave surface. The eye wants to fill the hollow with a sort of convex ghost.

I’ve been interested in what I call “void works” for many years: applying deep, dark colour to mostly concave forms so the space and object are confused. This lead me to Vantablack, a superblack made from carbon nanotubes. It’s extraordinary – the light gets in and is not able to get out. (Indeed, Vantablack absorbs all but 0.035 per cent of visual light.) The discovery of a new material like this opens up the most incredible possibilities. I love the idea that one could walk into a room that isn’t dark and at the same time isn’t there. You could have lights on, but the room wouldn’t be there. There’s something magical about that. It’s that wonderful, liminal moment between wonder and fear – that’s what I aim for.

I don’t mind too much when people call me an illusionist. I’m pretty sure that everything we consider to be real is illusory, or has an illusory element. From a psychological point of view, there’s more deep truth in the unreal than there is in the real. After all, objectively speaking, colour doesn’t even exist. So that’s the game. Keep your balance. Whenever subjectivity and objectivity are put into opposition, never come down on either side.

I’ve always been deeply fascinated by raw pigment, which is at once a colour – a pure, psychological idea – and a real substance. It has this otherness you can’t quite point at. My latest works at Lisson Gallery are made with silicone, all very red and very visceral. I work with red a lot, because of its darkness. The psychology of the red generates a much darker dark than black or blue.

And I’ve always been deeply interested in geometry, and I’ve put some of my pieces into motion to get at forms I can’t produce by any other method. Descension is a whirlpool that produces a natural parabola. It took me 20 years to get it to work, because it needs to be built at a certain scale, and be spinning at a certain rate. What surprised me, once I’d achieved those wonderful parabolic curves, was what happened at the bottom of the pool. A void opened up, a form I never expected to find there, for all the world as though this thing was boring its way the centre of the Earth!

Art and science do sit naturally quite close to each other. But making a statement of that sort in a piece of art is just going to get in the way. Science is apparently rational and art, perhaps, more confused. But they both start out as experimental processes, and both are contained by rules. A poetic purpose is every bit as real as an apparently scientific one. There’s objectivity in art, just as much as there’s subjectivity in science.

We humans acquired the means, very late in our evolution, to perceive a world of colour – and every day we spend phenomenal amounts of energy making the world even more colourful than it would otherwise be, with face paints and aniline dyes, fabrics and photographs, paints, powders and moving images everywhere.

But the further we leave our terrestrial environments behind, the more we confront a relatively colourless universe. At best, the Martian sky is mauve. The rings of Saturn are dun brown. The Moon is black and white. Or is it? Today, with a decent telescope and a digital camera, any keen amateur astronomer can demonstrate that the Moon is full of colour – but can our unaided eyes, so spoiled by life on earth, ever appreciate its de-saturated motley?

Exposed to radiations from which they were normally shielded by the Earth’s atmosphere, the earliest astronauts – balloonists with the US Air Force’s Man High and Excelsior projects –saw colours they conspicuously failed to identify on a Pantone chart. There are, after all, new colours to be discovered in space – but to see them, we need new eyes…

What Colour is the Moon? is a journey in space and time. We will see how colours, colour words, and the demands of art and industry have altered and enriched our understanding of colour. On the way we’ll re-enact Edwin Land’s startling “retinex” experiments in colour vision, and enjoy some (literally) dazzling optical illusions.

And we’ll journey across the lunar surface, taking in a spectrum that stretches from the sky-blue cast of the Mare Tranquillitatis, through the mysterious mustards near the crater Aristarchus to the red-brick “lakes” west of Montes Haemus.

The talk will be in the Science Museum’s Lecture Theatre on the ground floor of the museum. It’s open to all. No booking is necessary and seats are available on a first come first serve basis.