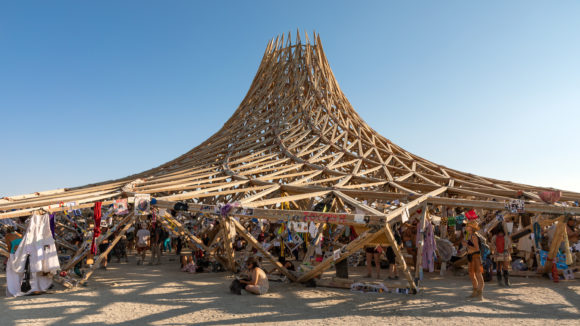 Talking to Arthur Mamou-Mani for the Financial Times, 22 December 2018

Sir John Soane’s Museum, on the north side of Lincoln’s Inn Fields in London, is very carefully arranged. This is as well. The eighteenth century architect and antiquarian made it a condition of his bequest to the nation that future custodians can’t go fiddling about with its layout.

Still, the current management contrive all manner of mischief — witness the robot playing Jenga in one uncharacteristically uncluttered corner.

Suspended from its gantry on four wires, this digitally-controlled robot is building something out of hand-size wooden blocks. It’s a slow beast, and some hours must pass before its construction becomes apparent: a dome, of the sort that John Soane produced for the Bank of England and Dulwich Picture Gallery.

Polibot does not look like a game changer. But according to Arthur Mamou-Mani, whose architectural practice built it, Polibot’s children are going to change the world.

Mamou-Mani, who studied at the École nationale supérieure d’architecture de Paris-Malaquais, now lectures at Westminster University. He also runs FabPub, a commercial, community-minded digital fabrication space. “I think a lot of people see the work we do as not real architecture,” he says, “but I think things could be a bit different, and that’s why I have my own practice.”

When Mamou-Mani was studying at the Architectural Association, around 2003, computer-generated design was a fairly dry topic. Patrik Schumacher (the principal of the architecture practice Zaha Hadid Architects) had already given this style of working (using computers to evolve forms according to a set of parameters) — its own term of art: parametricism. “But by styling this work, we’re constraining something that, so far as I can see, hasn’t blossomed yet,” Mamou-Mani says. “I feel it’s evolving into a much more material craft. It’s not about computers. It’s about developing and understanding the craft of marrying new machines and new materials. It goes way beyond code.”

Festival-goers at this year’s Burning Man in Nevada got a taste of his aesthetic as they helped assemble — and then ritualistically burned — Mamou Mani’s Galaxia temple, its distinctive spiral shape formed from twenty timber trusses that converged towards the sky. Documentation of the project appears here alongside some of Soane’s own more jaw-dropping architectural imagery. Joseph Michael Gandy’s watercolour
A bird’s-eye view of the Bank of England springs to mind: the building rendered as ruins, laid out as though for archaeologists of the future.

Through experiments in robotics, Mamou-Mani’s practice is out to develop new ways of building that will make architects, engineers and contractors work more closely together, to the point where design, technology and construction become a single, more or less collegiate field. The point, then, is not what Polibot is, but what it could become. It’s not just a pick-and-place machine. It’s the early prototype of a universal builder.

There have been many experiments in the large-scale 3D printing of buildings. But the kinds of hefty, industrial robot arms that are usually employed for this work are far too cumbersome and delicate to wheel onto a building site. MX3D’s exceedingly elegant 3D-printed steel bridge, for example, years in the developing, will be installed on the Oudezijds Achterburgwal in Amsterdam’s red light district around the middle of 2019. It was supposed to be printed on-site, but whole business –with six-axis robots building a six-metre-wide structure from layers of molten steel — proved far too dangerous to set going in a public space.

Gigantic mecha robot arms will never spew out quick-setting skyscrapers at a single sweep, Mamou-Mani says, for the simple reason that it would make construction less, not more efficient. “Really, construction is mostly about bringing big chunks of stuff together. Currently, concrete is still the material of choice for the construction industry, but we’re slowly switching to timber, and this will be a revolution, because once you start working with timber, you’re no longer casting anything on site. You’re thinking entirely in terms of prefabrication and assembly.”

Mamou-Mani dreams of building simple towers from elements (“prefabricated properly, by robotic arms, like cars”), and assembled on-site by gigantic Polibots. In the exhibition that accompanies his dome-building robot show, hangs a visualisation of his practice’s “DNA Blockchain skyscraper”, soaring above its fictive city’s skyline like a monstrous chromosome. As I stare, somewhat aghast, Mamou-Mani explains his vision of buildings that can expand and contract, depending on the economy. “We don’t need to surround ourselves with buildings that we construct when everything is going well, only to leave them empty when their time is past. Why do we think that permanence is necessary?” Elsewhere in the exhibition, the wall information proclaims that “the best cities are the ones that don’t leave ruins.”

Soane’s antiquarian ghost must surely be clanking his chains over that one. Indeed, its by no means obvious at first how this exhibition relates to its hallowed venue. The more the visitor learns, however, the nicer the fit appears. This museum, in Soane’s lifetime, was more an experimental workshop than a collection of architectural curios. Soane — no slouch when it came to technical innovation — filled it with peculiar and playful juxtapositions, with originals and fakes, copies and fantasias, in his pursuit of new concepts and techniques.

Mamou-Mani — the man who would rob future generations of their ruins — puts it well: “There is a reason we protect things, and build traditions around them. It’s because these things were revolutionary. We preserve them because they still have the power to inspire us. We can’t go on like the modernists, constantly wiping the slate clean.”

If there is a contradiction here, so be it. There is never just one style of architecture at work in the world. As for the evident gap between little Polibot’s game of solitaire, and its creator’s vision of a transformed construction culture, I know better than to huff about it. All great advances in industrial culture are prefigured by model-making. Model aircraft, to take an obvious example, have been flying a great deal longer than people have. Nor is the toy and model scene any less relevant to that industry today, witness the stellar career of SpaceShip One’s designer Burt Rutan — a man who still turns up at modelling conventions to complain about the lack of balsa wood.

Mamou-Mani’s animated wooden construction kit at the Soane is both a charming toy and an important vision of our necessary future. “Depending on trees for construction will give us lots of trees, but more than that, it’ll make us think about our materials in a new way, from their growth to their assembly, to their disassembly and their reuse or recycling.” Mamou-Mani’s sense of urgency is compelling, and rooted in some hard truths. Construction is arguably the least sustainable industry on earth. “We’re going to need to rethink everything. If architects and planners think they can just continue doing business as normal, then we’re doomed,” he says. “It’s as bad as that.”