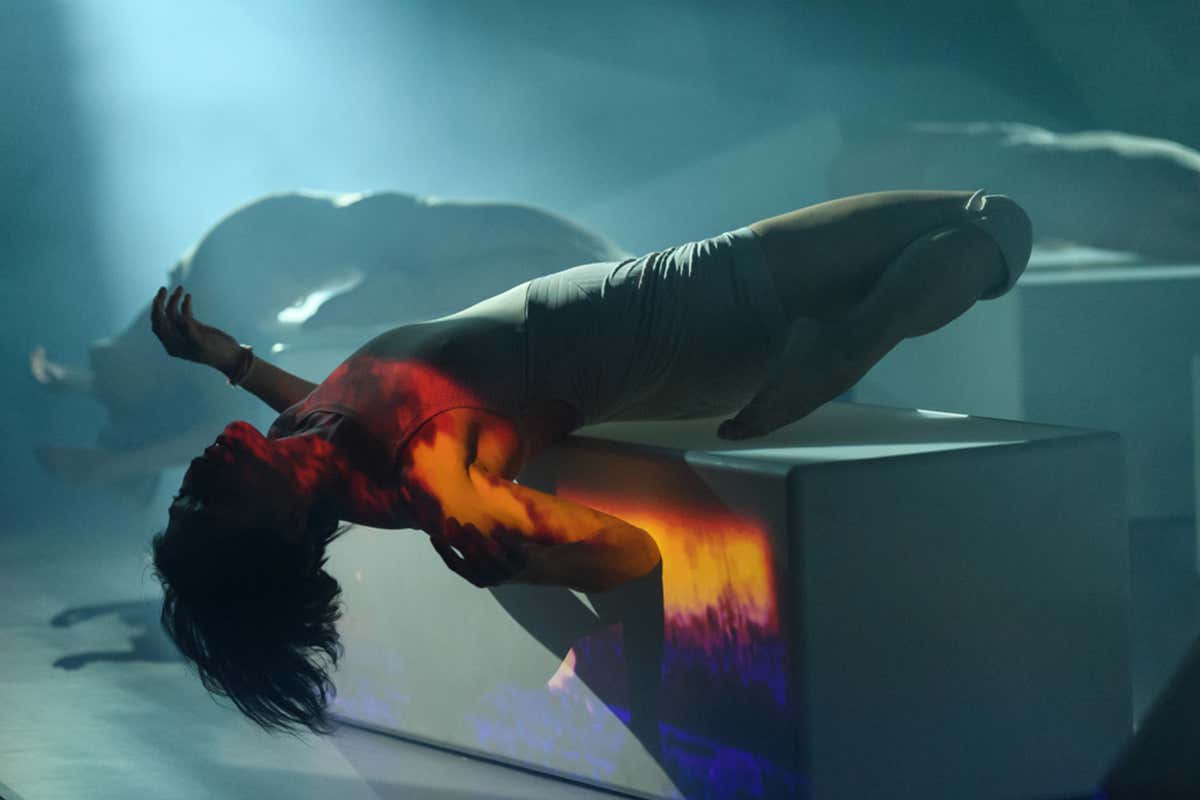 It still sounds mad – 14-18 NOW, the UK’s arts programme for the First World War centenary, commissioned a dance piece about the global flu pandemic. Why did you take this tragedy on – and how on earth did you shape it?

Shobana Jeyasingh    I began by looking at the smallest element of the story, H1N1, the virus responsible for the Spanish flu. The mechanics of virology appealed to me from the moment I began my reading and research. I spoke to two experts at length: Wendy Barclay, at Imperial College, and John Oxford at Queen Mary College, both in London.

All the strategies the flu virus has for penetrating the cell fascinated me. How it battles past the cilia on the cell’s wall is only the beginning. Once inside the cell it has to find the nucleus, and because it has no motive power of its own, it must hitch rides on transport proteins which themselves are unidirectional, so the virus must leap from one protein to another in search of its target like someone leaping on and off trams.

It’s a strange and amazing narrative, even before the virus starts harnessing the cell’s machinery to churn out copies of itself, which is surely the strangest twist of all.

This is an incredibly dark subject to tackle

That’s what I said to John Oxford, who was part of the team that researched the shape of the H1N1 virus. But his work had made him feel very differently. He’d embarked on this huge archaeological project, looking for the best-preserved tissue that might be infected with the virus. Tissue from people buried in lead coffins, or in Alaskan permafrost.

And he found the families of these victims still recalling how their dying had been cared for. People knew they were in danger, if they nursed somebody with the flu. But, regardless, people gave that care to their family, their spouse, their child. And their everyday heroism was being remembered, even now. It’s a dark story, yes, but Oxford showed me that story in an incredible, wonderful light.

The way your dancers personify the virus is frankly terrifying. They’re not “robotic” but at one time they move like nightmare quadripeds – columns of flesh armed with four extrusions of equal power and length, like RNA strands

At this point, they’re not portraying living things. A virus is a sinister code more than a lifeform in its own right. It’s a strategy, playing itself out in opposition to the body, by recruiting the body’s own forces. It’s not “attacking” anything. It’s far more subtle, far more insidious than that. What killed you, once you were infected with H1N1, was not the virus itself, but the violence of your own immune response. Just the drama of it was fascinating for me.

The medical profession doesn’t get much of a look-in here?

Doctors recognised what kind of disease the Spanish Flu was from its symptoms, but they had no idea that viruses even existed. How could they? Viruses are so small, without an electron microscope you can’t even see them. Several suspected, rightly, that the disease was airborne, but of course filters that can screen out bacteria are no defence against viruses.

So the work of helping people fell, not on the medical profession, who were powerless against what they couldn’t understand, but onto the women – nurses, mothers, wives, carers – who risked their own lives to look after the sick. The last section of the work, “Everyday Heroes”, is about nursing: the irony that while men were either winning or losing on the battlefield, women at home were fighting what was mostly a losing battle against a far more serious threat.

Why was this threat not properly recognised at the time?

Nobody knew what caused the flu, or why the youngest and the fittest seemed most prone to die. The onset was so sudden and dramatic, people would fall sick and die within a few hours.  Someone perfectly healthy at lunchtime might be dead at teatime.

In Manchester, the man who was in charge of public health, James Niven, woke up quite early to the fact that flu transmission shot up when people were gathered together. He tried to ban the Armistice Day celebrations in his city, but of course he was overruled. There was a huge spike in flu cases soon after. There are so many fascinating stories, but in 20 minutes, there’s a limit to what we can explore.

Contagion is not a long piece, but you’ve split it into distinct acts. Why?

It seemed the only way to contain such a complex story. The first section is called “Falling Like Flies”, which was the expression one Indian man used to describe how he lost his entire family in the blink of an eye: his little daughter, his wife, his brother, his nephews.  This section is simply about the enormity of death.  The second, “Viral Moves”, explores the dynamics of the virus. The third section, “Cold Delirium”, is about, well, exactly that.

What is “cold delirium”?

It’s a name that’s sometimes given to the virus’s neurological effects. One of the things we’ve begun to appreciate more and more – and this is why the official death count for the 1918 pandemic has risen recently – is that Spanish flu packs a huge psychological punch.

A lot of people who committed suicide in this period were most likely suffering the neurological effects of the virus. It triggered huge mental problems: screaming, fits, anxiety, episodes of aimless wandering.

And this wasn’t fully recognised then?

People noticed. But there was no means of reporting these cases to give people an idea of the shape and scale of the problem. Flu was not a reportable illness, like typhoid or plague. At the turn of the 20th century in Mumbai they had a plague that was fully documented and shaped the provision of public health. But in the case of flu, milder forms were so familiar, people didn’t really take much notice until the sheer numbers of the dead became unignorable.

And remember, in 1918 communication was not so effective. In Alaska, 90 per cent of a village community died, but there wasn’t any way to connect this episode to 20 million deaths in India. The connected global map that we carry around in our heads simply did not exist.

Contagion‘s set is a series of white boxes, arranged neatly at one end, and at the other end rising up into the air chaotically. Do they represent blood cells or grave markers?

You’re on the right track, though the idea first came from looking at pictures of hospital beds. Hospital beds tend to be ordered and in lines, and then this huge event comes along to disrupt everything, and sweep everything before it.