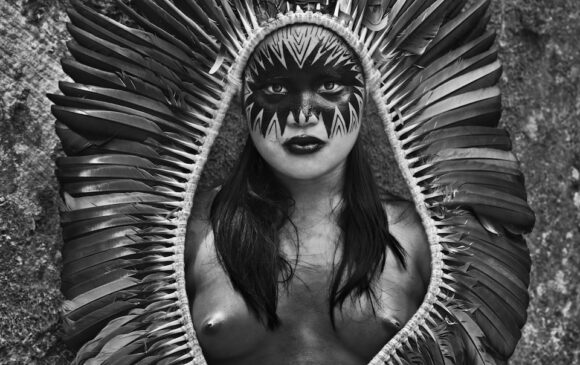 Trees, a group show at the Fondation Cartier in Paris featuring artists, botanists and philosophers, screams personality — by which I mean eccentricity, thought and argument. Appropriately, it’s an exhibition that lives and breathes. I hated some of it and walked out of the gallery grinning from ear to ear. It absolutely does its job: it makes trees treeish again.

The French state’s funding for the arts is generous in quantity but conservative in taste. It doesn’t fund the Fondation Cartier, leaving it free to be playful — to hang so-called “outsider” and indigenous artists alongside established names; to work with artists in the long term, developing and acquiring pieces as collaborations grow. In other words, Paris’s first private foundation for contemporary art is free to behave as a private patron should and to learn on the job.

Trees is the latest in a line of exhibitions conceived by the Fondation Cartier that seek to decentre humans’ view of ourselves as overlords of creation. In 2016, The Great Animal Orchestra exhibition (which visits London in October) sought to establish common intellectual ground between species. Trees goes further, seeking a rapprochement between two kingdoms, the animals and the plants.

Trees are weirdly hard to see because they hide in plain sight. “The tree is the chair on which we sit, the table we use to write, it is our cupboards, our furniture, but also our most ordinary tools,” as Parisian philosopher Emanuele Coccia writes in the exhibition catalogue.

Tree-blindness is made worse by a western intellectual inheritance. When Aristotle asserted in his De plantis that vegetable life is insensate, he was going against Plato, Anaxagoras, Democritus and Empedocles. And he was wrong: plants detect and react to temperature, humidity, air pressure, vibration, sound, touch, trauma and chemical information that we have no short names for. They respond to these sensations as quickly as any animal. They are not less than animals, but they are radically, mind-bendingly different.

A life among trees does things to the eye. Perspective is not much help in reading a treescape, while pattern recognition is vital. Work here by Kalepi, Joseca and Ehuana Yaira, Yanomami artists from the Amazon rainforest, explores the architectonic quality of trees, expressing them as entire bodies rather than (as the western eye prefers) complex assortments of twigs and leaves. The Paraguayan artists of the Gran Chaco region included here, meanwhile, express their forest home more through typology than through aesthetics. Theirs is a forest as well-stocked and well-ordered as a supermarket. Count all the little animals and plants laid out in rows: this is not a wilderness but a tally of self-renewing plenty. The general lesson seems to be that a forest is an environment that’s easier to read for what it contains than to swallow in one gulp.

Drawings and diagrams by contemporary botanist Francis Hallé honour natural history, a European tradition in which aesthetic knowledge and scientific knowledge run parallel. Twentieth-century laboratory-based science finds its way on to Fabrice Hyber’s huge canvases — like wall-sized notebook pages annotated with multicoloured scribbles, graphs, colour wheels and wave forms. In each, Hyber reduces the trees to a single trunk, or a trunk and a branch: a world of abstractions and generalis­ations. Cesare Leonardi’s meticulous drawings reveal the architectural potential of trees — a potential mischievously misappropriated in Peruvian photo­grapher Sebastian Mejía’s pictures of trees strained through fence wire, incorporated into walls or otherwise appropriated by the unliving city.

Some works here protest against the world’s breakneck deforestation. Thijs Biersteker, in collaboration with botanist Stefano Mancuso, offers a salve, wiring two trees in the Fondation’s extensive garden to scientific visualisations to help us empathise with what trees are sensing in real time. (This is more than a rhetorical flourish: the sense data that the piece collects are being corroborated and fed into scientific research, in a work that fulfils a dual artistic and scientific function.)

The lion’s share of the show is given over to Brazilian artist Luiz Zerbini, whose muted, simple monotypes and huge, complex, colourful canvases surround a table herbarium and a tree. The paintings are an Anthropocene jungle of sorts in which urban and natural forms hide in plain sight within a fiercely perpectiveless, rectilinear grid. Give your eyes time to adjust, and you find yourself in a city/forest of the future, where nature is exploited but not exhausted, and beauty and utility coexist.

These canvases suggest that we humans, having crafted our way out of the trees and developed those crafts on an industrial scale, can perhaps learn an even neater trick and make the whole human adventure last beyond this current, rapine moment

I came out of this show happy. I wasn’t just enthused. I’d been converted.