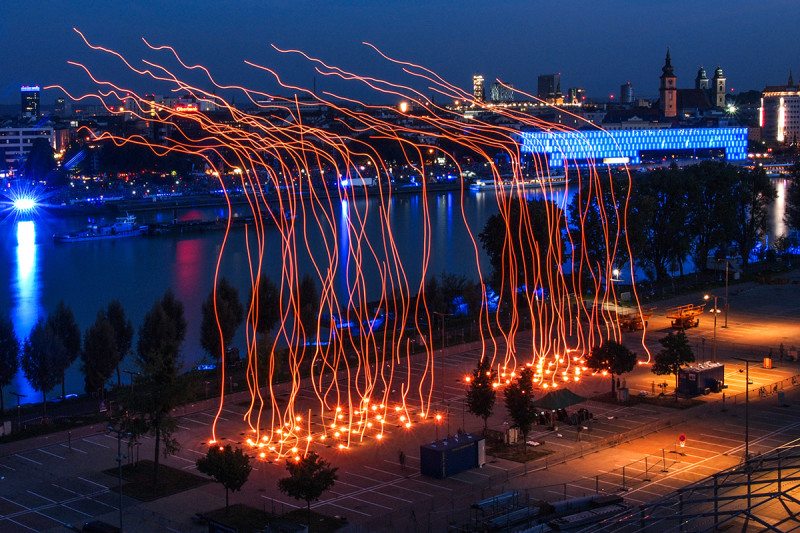 In a disused mail sorting office in Linz, Austria, an industrial robot twice my height has got hold of Serbian-born artist Dragan Ilic and is wiping him over a canvas-covered wall. Ilic is clutching pencils, and as the robot twirls and dabs him against the wall, the artist makes his own frantic marks – a sort of sentient brush head. These performances are billed as a collaboration between artist and machine. All I see is the user getting used.

Every September in Linz, the Ars Electronica festival tries to marry technology and art. Andy Warhol took up screen-printing in the 1960s, and a whole generation of gallery-goers have since grown up with the notion that this match is easy.

Indeed, the coupling of art and technology has become a solid pillar of art education, especially now that so much funding comes from IT big hitters such as Sony and private institutions like the Wellcome Trust.

But if the venerable Ars Electronica has demonstrated anything in its 37-year history – beyond the ability of the arts to remake and rejuvenate a city – it is that technology and art make astonishingly unhappy bedfellows.

This year, for example, Swiss artist Daniel Boschung used an industrial robot controlled by bespoke software to take 900-million-pixel portraits of people – forensic surveys so detailed that they drained all emotion from their subjects’ faces.

Not far away, another robot, Davide Quayola’s Sculpture Factory, chiselled through partially completed life-size stone renditions of Michelangelo’s David. The attention was directed to the pixelated nature of 3D scanning, which smeared, spread and tessellated the biblical giant-killer to the point of incoherence: here a limb, there an eye.

Walking the corridor towards the current sculpture-in-progress, one passed attempt after attempt of clone Davids peeking in more or less agonised fashion from their cuboid stone prisons, in a sort of mineral retread of that infamous scene from Alien: Resurrection.

The provoking thing about Ars Electronica is that it jams together boutique displays of the latest technology, trenchant criticisms of the post-industrial project, jokes and honest failures. It is a gargantuan vessel powered by enthusiasm, but steered by nothing remotely resembling taste.

Eventually, the visitor comes to rest against one of the more obvious wins. Boris Labbé’s film Rhizome, which netted the festival’s annual animation prize, unites watercolour illustration and digital effects to tell an epic tale of evolution, civilisation and cosmic transformation in one steady, heart-stopping reverse zoom.

And then there is Frank Kolkman’s OpenSurgery, which combines 3D printing and laser-cutting with hacked surgical pieces and components bought online. This is a DIY robot that can perform laparoscopic surgery – a terrifying comment on the way that hacking and “making” are increasingly expected to stand in for the real thing.

You’ll need a drink after all that, so head for Max Dovey’s A Hipster Bar. And good luck – this genuine pop-up drinking hole will, in true neo-liberal fashion, keep the gate shut unless its face-recognition system considers you “90 per cent hipster”.

As you sip, ponder this: it was the assertion of the Romantic movement that art makes us appreciate the beauty, richness and sheer size of the world. And technology, used appropriately, brings us closer to that sublime. As the Romantics’ acolyte, the writer and pioneering pilot Antoine de Saint-Exupéry, put it: “The machine does not isolate man from the great problems of nature but plunges him more deeply into them.”

Even if that was true in 1939, it’s not true now: not now our drones do our flying for us; not now our technology has got away from us to the point where large portions of nature are being erased; not now we live mired in media and, indeed, have to make special efforts to escape it.

Naturally, artists want to explore the new technology of their day, but these days the best results seem to come when we misappropriate the machines and kick them into new shapes, or simply point and laugh.