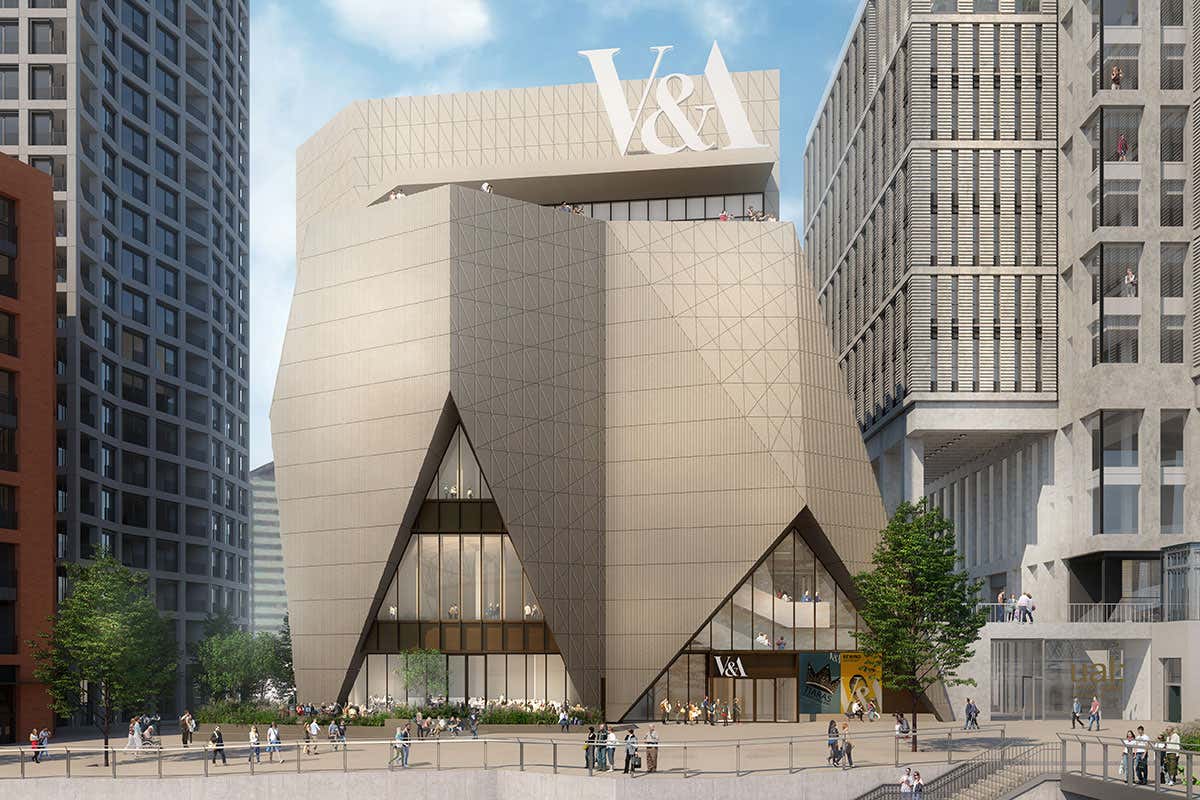 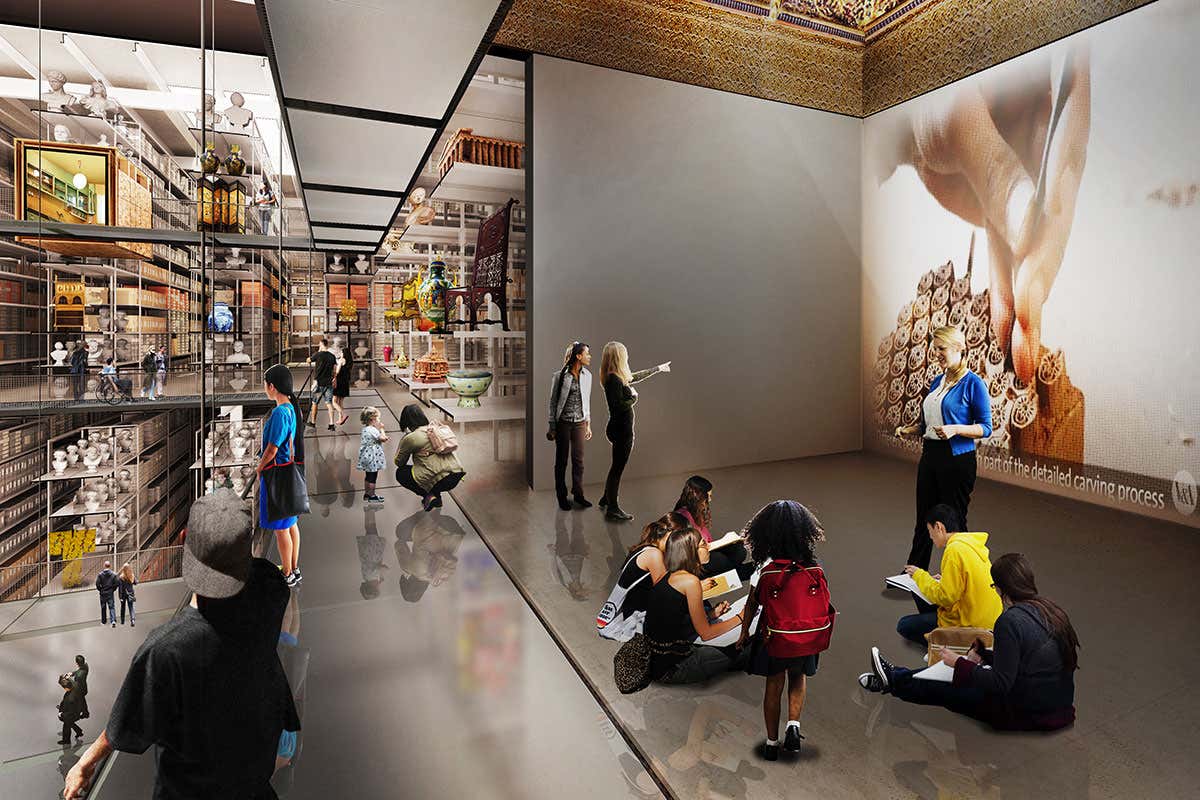 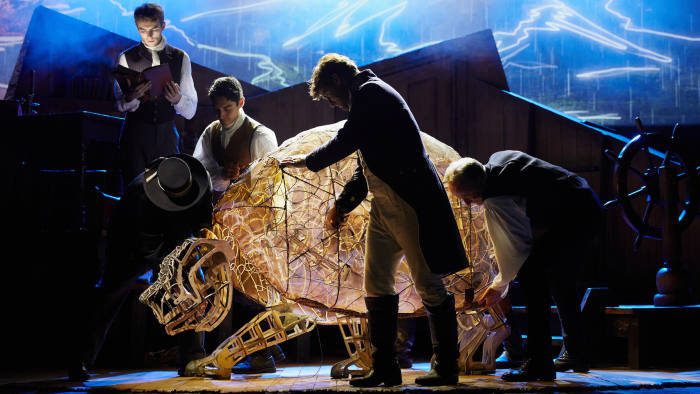 Science discovered show business long before a 22-year-old Charles Darwin set off on a round-the-world mapping expedition aboard HMS Beagle. The Royal Institution had been staging public lectures for more than a decade before he was born, and was notorious for its hazardous stagecraft. Audiences regularly contended with toxic fumes, safety lamps plunged into explosive gases, powerful electromagnets dangled above their heads, and model volcanoes altogether more pyrotechnic than anything you’ll find at a school science fair.

Audiences for The Wider Earth, David Morton’s puppet-populated play about Darwin’s voyage, are treated more kindly in the brand-new 350[CHK]-seat Jerwood theatre at the Natural History Museum in London. The worst you can say about this show is that it’s a bit loud.

The Wider Earth’s whirling set (ship. mountain, house on a hill, cliff, jungle…) is, like the script, the direction, the puppets and the production, a creation of David Morton and his Dead Puppets Society. A superior animated map-cum-sketchbook, provides backdrops at flicker-book speed for an annoyingly televisual script (Oh, for a decently written monologue!) which is rather more clever than it seems. Once I was done wincing at all its many eillisions and simplifications, the absence of fellow evolutionary pioneer Alfred Russel Wallace and all the rest of it, it dawned on me that this jumped-up family-friendly puppet show (the iguana deserved an ovation) succeeded where many longer and more scholarly treatments fail. It put the then-controversial geology of Charles Lyell [SP?] front and centre of its story, arguing that Darwin’s theorising was not merely inspired by Lyell’s work, but was a conscious and deliberate exploration of its implications. Together, Lyell and Darwin provided the evidential backbone for our materialist view of the universe, and Morton’s thunking, didactic narrative nevertheless turns this talk into the sort of staggeringly radical nonsense it must have seemed in Darwin’s day.

The Wider Earth sold out Sydney Opera House before arriving at London’s Natural History Museum for its European premiere. Considered purely as theatre, it’s surprising it did so well. As a hybrid science entertainment, however, it’s virtually faultless, a welcome innovation from a museum that, lumbered as it is with the task of keeping school-kids occupied during wet half-term holidays, decided (from around the time of 2016’s exhibition Colour and Vision, if memory serves) to communicate unashamedly through spectacle, beauty and wonder.

The workhorse museums of Albertopolis — the V&A, the Science Museum and the rest — have to work harder than most to realise new aesthetic and artistic opportunities. In a city that can sustain shows like the V&A’s recent Opera: Passion, Power and Politics, which boasted a working replica of a baroque theatre, it’s easy to forget how hard it is for our most venerable institutions to innovate. Nothing kills the spirit of experiment quicker than high visitor numbers, and the legalities and expenses around venerable bricks and mortar have a deadening effect of their own.

If younger institutions find it easier to combine exhibitions with events of all kinds, including dramatic performance, it’s usually because they inhabit newer buildings. Also, the prevailing culture isn’t expecting them to act as agents in some great global stocktaking exercise. The Science Gallery network, which opened a new gallery in London this September, places more emphasis on audience involvement than on the acquisition and preservation of objects. None of its galleries, existing or under construction, have plans to acquire a permanent collection. Neither has The Shed, a huge multi-arts venue due to open in New York next year.

The great storehouses of our culture are now, for good and for ill, in the cloud. Good: a museum can print an archival-grade sculpture or painting to inform an exhibition. Bad: no-one can remember the password.Good: a VR entertainment called Hold the World, in which a more than passable David Attenborough avatar leads you round the laboratories of the Natural History Museum. Bad: you have to be a Sky subscriber to enjoy the trip.

Meanwhile the museum becomes a place of interpretation, more than of preservation, and to do this well, new forms of address are always welcome, particularly among institutions on limited budgets. The Darwin Museum’s lovely but tiny show Darwin: Man of Science is immeasurably expanded by tours-in-character, actorly recitations of famous mysteries, and an authentic magic lantern show. The other day, in the even more crammed environs of University College London’s Grant Museum of Zoology, Tom Bailey’s solo show Zugunruhe made politics of ornithology, combining Eritrean, Egyptian, Iranian and Sudanese songs shared by residents of the Calais “Jungle” with calls from globally migrating birds.

Introducing performance to the museum space goes back at least as far as Kenneth Clark’s stint as director of the National Gallery in the 30s and 40s. But its contemporary currency is something new, and it’s encouraging the development of new kinds of curation. Never mind the museological mischiefs of artists like Mark Dion and Salvatore Arancio (whose show Surreal Science is currently running at London’s Whitechapel Gallery). Young curator-artists are placing performances, debates, workshops and even discos at the heart of the museum and gallery experience. Again, money is part of the story, since this kind of programming is best left to a self-renewing supply of guest curators. In the last couple of years Shrinking Space, a science-event production company consisting of just two people, Andy Franzkowiak and Mary Jane Edwards, has created a son-et-lumiere for Kew Gardens Wakefield, arranged an exhibition about blood for Science Gallery London, strung a sonic solar system across the Royal Albert Hall and staged various world-ending events (or at least, the war-rooms for same) in festivals up and down the country.
Just as we once asked, “Is it art?” we may very well want to ask, is this sort of thing museology? Only posterity can give us an answer. What is apparent is that very many creative people are bringing serious thought to bear on what museums can do for a technological era that has made knowledge simultaneously accessible, and boring. 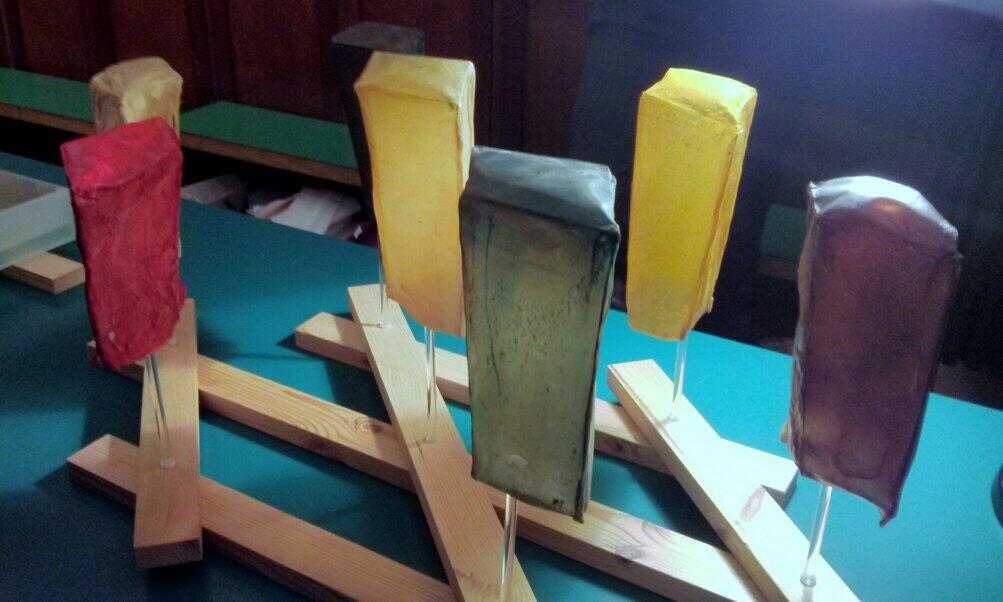