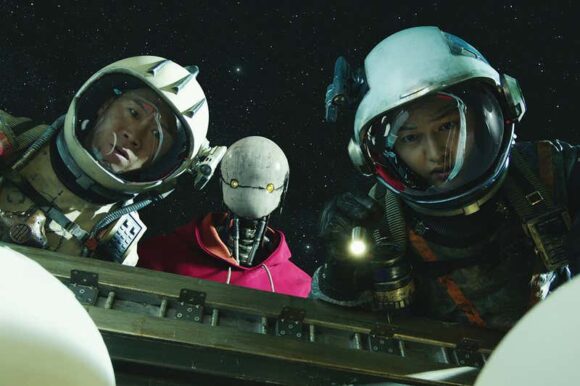 Tae-Ho is a sweeper-up of other people’s orbital junk, a mudlark in space scavenging anything of value. In Jo Sung-hee’s new movie Space Sweepers, he is someone who is most alone in a crowd – that is to say, among his crewmates on the spaceship Victory. They are a predictable assortment: a feisty robot with detachable feet; a heavily armed yet disarmingly gamine captain; a gnarly but lovable engineer with a past.

Tae-ho is played by Song Joong-ki, who also starred in Jo’s romantic smash hit A Werewolf Boy (2012). Song is the latest in a long line of South Korean actors whose utter commitment and lack of ego can bring the sketchiest script to life (think Choi Min-sik in revenge tragedy Oldboy, or Gong Yoo in zombie masterpiece Train to Busan).

Tae-ho has a secret. As a child soldier, culling troublemakers in orbit, he once saved the life of a little girl, adopted her, was ostracised for it, hit the skids and lost his charge in a catastrophic orbital collision. Now he wants her back, at any cost.

The near-magical mega-corp UTS can resurrect her using her DNA signature. This is the same outfit that is making Mars ready for settlement, but only for an elite 5 per cent of Earth’s population. The rest are left to perish on the desertified planet. All that is needed to restore Tae-ho’s ward is more money than he will ever see in his life, no matter how much junk he and his mates clear.

Then, as they tear apart a crashed shuttle, the crew discovers 7-year-old Kang Kot-nim (Park Ye-rin), a girl with a secret. She may not even be a girl at all, but a robot; a robot who may not be a robot at all, but a bomb. Selling her to the highest bidder will get Tae-ho’s daughter back, but at what moral cost?

South Korea’s first space-set blockbuster is, in one aspect at least, a very traditional film. Like so much of South Korean cinema, it explores the ethical consequences of disparities of wealth – how easily poorer people can be corrupted, while the rich face no moral tests at all.

But what do all these high-minded, high-octane shenanigans have to do with space junk, like the 20,000 artificial objects with orbits around Earth that can be tracked? Or the 900,000 bits of junk between 1 and 10 centimetres long? Or the staggering 128 million pieces that are smaller still and yet could wreak all kinds of havoc, from scratching the lens of a space telescope to puncturing a space station’s solar array?

Nothing, and everything. Space Sweepers is a space opera, not Alfonso CuarÓn’s Gravity. The director’s interest in the physics of low orbit begins and ends with the mechanics of rapidly rotating bodies. And boy, do they rotate. On a surprisingly small budget, the movie ravishes the eye and overwhelms the ear as Victory hurtles through a cluttered, industrialised void, all right angles and vanishing perspectives. You can’t help but think that while space may never look like this, it could easily feel like it: frenetic, crowded, unreasonable, ungiving, a meat grinder for the soul.

Similarly, while the very real problem of space junk won’t be solved by marginalised refugees in clapped-out spaceships, this film has hit on some truth. Cleanliness isn’t a virtue because it is too easy to fake: just dump your filth on somebody else. It is just wealth, admiring itself in the mirror. Real virtue, says this silly but very likeable film, comes with dirt on its hands.