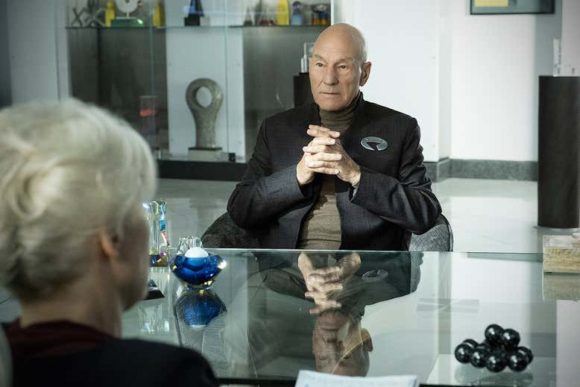 Star Trek first appeared on television on 8 September 1966. It has been fighting the gravitational pull of its own nostalgia ever since – or at least since the launch of the painfully careful spin-off Star Trek: The Next Generation 21 years later.

The Next Generation was the series that gave us shipboard counselling (a questionable idea), a crew that liked each other (a catastrophically mistaken idea) and Patrick Stewart as Jean-Luc Picard, who held the entire farrago together, pretty much single-handed, for seven seasons.

Now Picard is back, retired, written off, an embarrassment and a blowhard. And Star Trek: Picard is a triumph, praise be.

Something horrible has happened to the “synthetics” (read: robots) who, in the person of Lieutenant Commander Data (Brent Spiner, returning briefly here) once promised so much for the Federation. Science fiction’s relationship with its metal creations is famously fraught: well thought-through robot revolt provided the central premise for Battlestar Galactica and Westworld, while Dune, reinvented yet again later this year as a film by Blade Runner 2049‘s Denis Villeneuve, is set in a future that abandoned artificial intelligence following a cloudy but obviously dreadful conflict.

And there is a perfectly sound reason for this mayhem. After all, any machine flexible enough to do what a robot is expected to do is going to be flexible enough to down tools – or worse. What Picard‘s take on this perennial problem will be isn’t yet clear, but the consequences of all the Federation’s synthetics going haywire is painfully felt: it has all but abandoned its utopian remit. It is now just one more faction in a fast-moving, galaxy-wide power arena (echoes of the Trump presidency and its consequences are entirely intentional).

Can Picard, the last torchbearer of the old guard, bring the Federation back to virtue? One jolly well hopes so, and not too quickly, either. Picard is, whatever else we may say about it, a great deal of fun.

There are already some exciting novelties, though the one I found most intriguing may turn out to be a mere artefact of getting the show off the ground. Picard’s world – troubled by bad dreams quite as much as it is enabled by world-shrinking technology – is oddly surreal, discontinuous in ways that aren’t particularly confusing but do jar here and there.

Is the Star Trek franchise finally getting to grips with the psychological consequences of its mastery of time and space? Or did the producers simply shove as much plot as possible into the first episode to get the juggernaut rolling? The latter seems more likely, but I hold out hope.

The new show bears its burden of twaddle. The first episode features a po-faced analysis of Data’s essence. No, really. His essence. That’s a thing, now. How twaddle became an essential ingredient on The Next Generation – and now possibly Picard – is a mystery: the original Star Trek never felt the need to saddle itself with such single-use, go-nowhere nonsense. But by now, like a hold full of tribbles, the twaddle seems impossible to shake off (Star Trek: Discovery, I’m looking at you).

Oh, but why cavil? Stewart brings a new vulnerability and even a hint of bitterness to grit his seemlessly fluid recreation of Picard, and the story promises an exciting and fairly devastating twist to the show’s old political landscape. Picard, growing old disgracefully? Oh, please make it so!