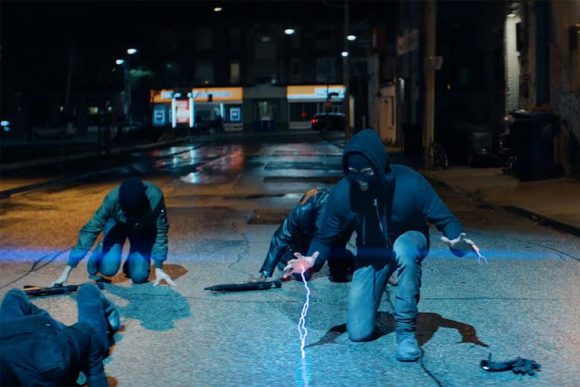 AROUND 4 per cent of humans are Special. Connor is one of them. Lightning shoots from his hands. His mother is Special, too. She freezes things, including – since a tumour began pressing on her brain – patches of her own skin. Connor needs money to save his mother. And, since Specials have been pushed to the social margins, this means he needs to rob a bank.

Code 8′s director, Jeff Chan, is a relative newcomer whose screenplays co-written with producer Chris Pare fold well-trodden movie ideas into interesting shapes. Grace: The Possession from 2014 was a retread of The Exorcist seen from the possessed girl’s point of view. Code 8, released to streaming services all over the world last December (but not, for some reason, in the UK until now), is a low-budget sci-fi crime thriller.

Connor, played by Robbie Amell, works in construction, wiring up houses with his bare hands. A nicely understated sequence sees his workmates walk past carrying concrete bollards under their arms, when a police raid on “illegals” drops robots from the sky that shoot a worker in the back.

After this, Connor decides he can’t take any more and ends up under the wing of Garrett (Stephen Amell, Robbie Amell’s cousin in real life), a thief whose professionalism is sorely tested by his boss, the telepathic drug lord Marcus (Greg Bryk).

Code 8 is a masterclass in how to wring a believable world out of unbelievably few dollars. This doesn’t come from its premise, which is so generic that it is hardly noticeable. Instead, what sets the film apart is the way it marries contemporary American crime fiction to sci-fi. This fusion is harder than it looks.

Since James M. Cain wrote The Postman Always Rings Twice in 1934, American crime fiction has primarily been an exercise in social realism. It’s about life at the bottom, steeped as it is in poverty, addiction, ignorance and marginalisation. The American crime genre tries to tell the truth about these things, and the best of it succeeds.

Science fiction, on the other hand, is a literature of ideas. Detective plots are tempting for science fiction writers. Put a detective in a made-up world and get them to ask the right questions, and they can show your audience how your made-up world operates.

But that, of course, is precisely the problem: it’s only a made-up world. We aren’t being told anything about the way the real world ticks. Inventive sci-fi can feel an awful lot like under-researched crime fiction.

Somehow, Code 8 manages to be both a cracking crime caper and a solid piece of science fiction. While spotting influences is a hazardous game, my guess is it is an homage to Michael Mann’s L.A. Takedown, a fabulous TV pilot from 1989 that provided the skeleton for Mann’s much more famous 1995 blockbuster Heat.

But it is Code 8′s science-fiction element that impressed me most: a cleverly underplayed cat-cradle of a plot, tangling superpowers, social prejudice, drug addiction and state prohibition so as to create a set of intractable social problems that are both strange and instantly familiar.

Robbie and Stephen Amell have championed the film and its ideas since working on the 2016 short film of the same name. Now a TV spin-off is in the works. I do hope Stephen, in particular, attaches his name to this. Anything to get him out from under his role as the DC Multiverse’s Green Arrow…