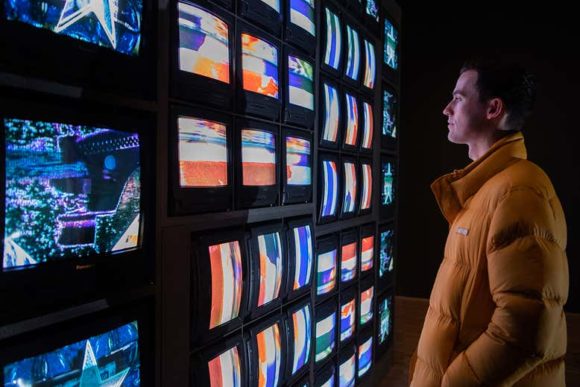 A short drive out of Washington DC, in an anonymous industrial unit, there is an enormous storage space crammed to the brim with broken television sets, and rolling stack shelving piled with typewriters, sewing machines and crudely carved coyotes.

This is the archive of the estate of Nam June Paik, the man who predicted the internet, the Web, YouTube, MOOCs, and most other icons of the current information age; an artist who spent much of his time engineering, dismantling, reusing, swapping out components, replacing old technology with better technology, delivering what he could of his vision with the components available to him. Cathode ray tube televisions. Neon. Copper. FORTRAN punch cards. And a video synthesizer, designed with the Tokyo artist-engineer Shuya Abe in 1969. The signature psychedelic video effects of Top of the Pops and MTV began life here.

Paik was born in Seoul in 1932, during the Japanese occupation of Korea, and educated in Germany, where he met the composers Karl-Heinz Stockhausen and John Cage. A fascinating retrospective show currently at London’s Tate Modern celebrates his involvement with that loose confederacy of artist-anarchists known as Fluxus. (Yoko Ono was a patron. David Bowie and Laurie Anderson were hangers-on.)

Beneath Paik’s celebrated, and celebrity-stuffed concerts, openings and “happenings” — there’s what amounts — in the absence of Paik’s controlling intelligence (he died in 2006) — to a pile of junk. 668 televisions, some of them broken. A black box the size of a double refrigerator, containing the hardware to drive one of Paik’s massive “matrices”, Megatron/Matrix, an eight-channel, 215-screen video wall, in pieces now, a nightmare to catalogue, never mind reconstruct, stored in innumerable tea chests.

The trick for Saisha Grayson, the Smithsonian American Art Museum’s curator of time-based media, and Lynn Putney its associate registrar, is to distinguish the raw material of Paik’s work from the work itself. Then curators like Tate Modern’s Sook Kyung Lee must interpret that work for a new generation, using new technology. Because let’s face it: in the end, more or less everything Paik used to make his art will end up in the bin. Consumer electronics aren’t like a painter’s pigments, which can be analysed and copied, or like a sculptor’s marble, which can, at a pinch, be repaired.

“Through Paik’s estate we are getting advice and guidance about what the artist really intended to achieve,” Lee explains, “and then we are simulating those things with new technology.”

Paik’s video walls — the works by which he’s best remembered, are monstrously heavy and absurdly delicate. But the Tate has been able to recreate Paik’s Sistine Chapel for this show. Video projectors to fill a room with a blizzard of cultural and pop-cultural imagery from around the world — a visual melting pot reflective of Paik’s vision of a technological utopia, in which “telecommunication will become our springboard for new and surprising human endeavors.” The projectors are new but the feel of this recreated piece is not so very different to the 1994 original.

To stand here, bombarded by Bowie and Nixon and Mongolian throat singers and all the other flitting, flickering icons of Paik’s madcap future, is to remember all our hopes for the information age: “Video-telephones, fax machines, interactive two-way television… and many other variations of this kind of technology are going to turn the television set into an «expanded-media» telephone system with thousands of novel uses,” Paik enthused in 1974, “not only to serve our daily needs, but to enrich the quality of life itself.”