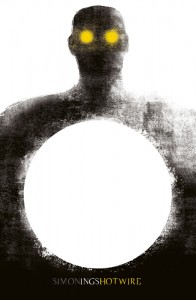 Not a sequel to his first novel Hot Head, but set in the same world and sharing some of the same preoccupations, Simon Ings’ Hotwire asks some interesting questions about how we become human, and how to become human again. Ajay made some bad choices once upon a time–he got his grandfather killed and his sister horribly mutilated; to pay to have her rebuilt, an organ at a time, he has become an all-purpose heavy, first a secret policeman and then an assassin. Rosa has never had any choices–she roams, inconsequentially, the corridors of the space station that is, in a very real sense, her mother, scared of everything she meets and sees. When these two find themselves in improbable alliance, the consequences could be scary, and are highly charged and erotic and at times touching. This is a book about coming to terms with reality, and the very improbability of much of the reality with which the central characters have to come to terms does not lessen the hardness of their choices and our sympathy with them. Full of strongly visualised exotic settings–the slums of Brazil and the interiors of mind human and artificial–this lives up to Ings’ early promise.
Roz Kaveney

How crude and primitive we first-generation cyberpunks and our works look now! Such anyhow were my thoughts upon finishing Simon Ings’s new novel Hotwire. Perhaps only a cusp writer like Ings (born 1965) could have produced this laser-gazed logicbomb of a book, simultaneously appalling and heartening, monitory and embracing. There is nothing extraneous in Ings’s writing, and much that is marvellous. Blink between sentences, and you might miss something. From the Carrollian environment of Rosa’s birthplace to the favelas of Rio, Ings offers cinematic thrills galore.
Paul Di Filippo in Asimov’s October/November 1996

Moving from a Trinidad wasted by the new drug ZB15 to an underworld Havana of organ bootlegging, Brit SF writer Simon Ings sketches out a corporate future that is both intriguing and unsettling. You should read Simon Ings.
iD, September 1995

Bursting with ideas bigger than many writers can cope with even as reading matter, Ings is second-guessing not only sf readers, but the planet.
Nick Royle, Dazed and Confused 13

Simon Ings has taken virtual reality way beyond the cyberpunk fathered by William Gibson. Ings is a young British writer with an assured future.
David Barrett in New Scientist, 14 October 1995

This is a book about the assertion of human values against those of the power broker and the machine. As such, it can lay claim to the credentials of a romance, and one played out against a more than usually bleak and hostile background. Ings lays it on the line.
Interzone 101, Autumn 1995