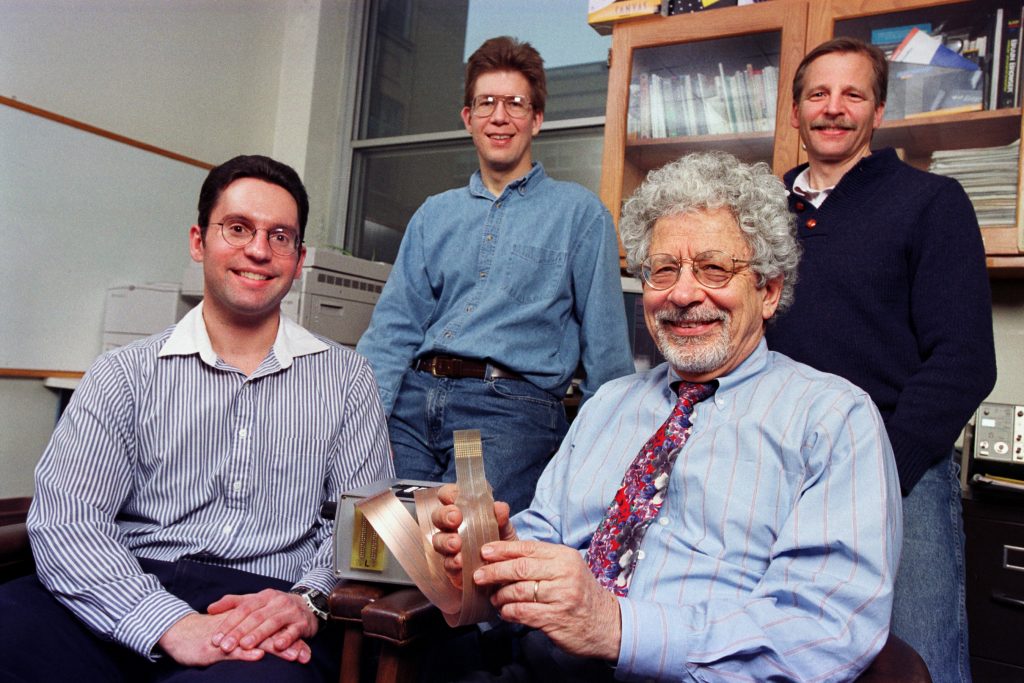 Since the early 1970s, Paul Bach-y-Rita has been building prosthetic eyes for the blind: not false eyes, not glass eyes, but fully working organs of vision. With them, Bach-y-Rita – a biomedical engineer at the University of Wisconsin-Madison – has helped the blind to see.

His eyes do not look like eyes. The earliest models look like clothing. Bach-y-Rita’s vests are worn either across the stomach or across the back. Sewn into the material are 256 mechanical vibrators (nicknamed ‘tactors’ because, when they’re activated, the subject can feel their touch). A computer worn at the hip recieves pixellated images from an ultra-low resolution video camera, worn on a pair of eyeglasses, and translates these images into mechanical vibrations, via the tactors. The upshot is a kind of Braille or Pin Art vision.

Bach-y-Rita’s subjects reported that after a couple of hours they were no longer aware of the tingling sensations generated by the vest. They were able to navigate between obstacles, and, eventually, to recognise faces. When the ‘view’ before them changed – because they moved, or because something moved in front of them – they reacted appropriately to the change of view. If you screwed up a piece of paper and threw it at them, they would duck.

Even more suggestive is an experiment reported by Daniel Dennett in which a researcher, without warning, manipulated a zoom button on a volunteer’s camera, making it seem as though he were hurtling forward. The volunteer raised his hands to protect his face. But his vest was strapped to his back.(1)

The artificial sense bestowed upon his blind volunteers by Paul Bach-y-Rita not only works like vision – it feels like vision. It seems that the mind is not overly fussy where it gets its sensory information from. What matters is what ‘shape’ the information takes. If visual information is received through the skin of your back, it only takes your brain a couple of hours to start seeing through your back. If your back starts itching, on the other hand, you won’t mistake the itch for a flash of light. The ‘shape’ of an itch is different to the ‘shape’ of, say, a face, and the brain knows how to deal with each.

The senses become specialized over evolutionary time, but they are never entirely compartmentalised. If we look closely at a rod – a photosensitive cell common to almost all vertebrate eyes – we see that it comes in two parts – a fairly normal-looking cell body, and a column made up of thousands of discs containing the pigment rhodopsin. When the rod is exposed to light, the pigment column expands like a slinky to twice its length, with no increase in width. In the dark, it contracts again. Each rod is behaving just like a muscle cell – and for good reason. In many functional respects, it is a muscle cell. Muscle fibres expand and contract in response to electrical stimulation. The retinal rod, too, is responding to an electrical signal – one that comes, not from a nerve, but from a biochemical reaction to light. This is what the working retina looks like on a cellular scale – a vast automated Pin Art machine.

For an overview of Paul Bach-y-Rita’s work, see Paul Bach-y-Rita, Mitchell E. Tyler, and Kurt A. Kaczmarek. 2003. ‘Seeing with the brain.’ International journal of human-computer interaction, 15/2:pp285-295. In early 2001, the University of Wisconsin-Madison’s article Tongue seen as portal to the brain first broke the news of Bach-y-Rita’s return to the sense-substitution field. (Since the late 1970s, he had turned his attention more towards to the rehabilitation of victims of brain damage.) The latest applications of Bach-y-Rita’s work are discussed in Blakeslee,S. 2004. ‘New Tools to Help Patients Reclaim Damaged Senses.’ New York Times, November 23.
See also See also Bach-y-Rita’s commercial website Wicab.com.