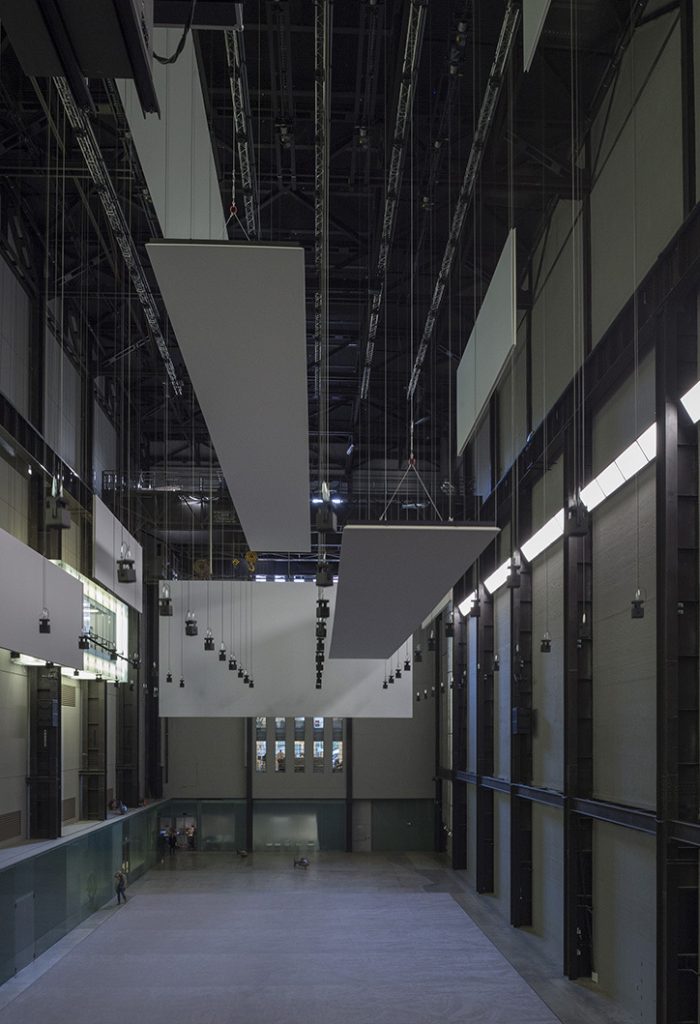 IN STANISLAW LEM’S bitterly utopian novel Return from the Stars, astronaut Hal Bregg comes back to Earth from a 10-year mission to find that 127 years have passed during his absence. The world that greets him is very different from the one he remembers. For one thing, its architecture absolutely refuses to stay put. Platforms slide past and around each other, walls and columns spring up out of nowhere, or fall precipitately away: the solid environment has liquefied. He worries – and is right to worry – that he will never find his feet in this new place.

The Paris-based artist Philippe Parreno is kinder than Lem. Visitors to his vast installation at London’s Tate Modern, Anywhen, get a carpet to lie on while the vast Turbine Hall shimmies and pulses around them. Let there be no doubt here: Parreno’s awful grey machine is triumphally futuristic, an interior so smart it has outgrown any need for occupants. Anywhen is thunderous, sulphurous, awful in its full archaic sense.

Visitors find themselves in a sort of aquarium, in which sound and light obey a claustrophobic new physics. Speakers descend from and ascend to the ceiling, relaying captured outside noise from nearby teenagers, a fragment of song, a passing aeroplane. Banks of lights flash. In a sudden hiatus, bits of colour drop down from somewhere on to a giant mobile screen and float off. Some are murky projections, but there are solid objects, too, in the shape inflatable fish. These seem a lot more at home in this shifting space than we do. Huge, white, architectonic panels reconfigure the dimensions of the gallery, moving up and down with more than random malevolence. Is this malevolence an illusion? Of course, but it’s an utterly convincing one – so much so that one wonders what the artist means by it.

Alas, Parreno is not here to answer. He has, it seems, ceded control of his installation to a colony of yeast, fed and watered in a small lab visible in an out-of-the-way corner. Changes in the colony’s temperature, growth and movement are variables in a biocomputed algorithm that will enrich the installation’s behaviour during its six-month run. It still remains to be seen whether those initial conditions are rich and complex enough to generate a significant creative work.

Right now, as you lie there, hands scrabbling for purchase on the thin carpet, it seems as if the Turbine Hall has been invested with a terrible, alien intentionality. Is this another illusion? It must be. And yet, how can we be sure?

The 17th-century German philosopher Gottfried Leibniz once came up with a thrilling but flawed argument for the existence of God. In one of his best-known works, Monadology, Leibniz invites readers to imagine that they are visiting “a machine whose structure makes it think, sense, and have perceptions”. There would be plenty to see: innumerable cogs, wheels, belts and gears.

But that, says Leibniz, is precisely the problem – “we will find only parts that push one another, and we will never find anything to explain a perception”. The same issue arises when we explore the brain: no amount of mapping, no amount of analogy, brings us any closer to the subjective “is-ness” of conscious experience.

Leibniz used his thinking mill to assert that the world is more than material, and that thinking must occur on another (divine) plane of existence. He was a glass-half-full sort of thinker, whose rambunctious belief in the essential goodness of the universe – all is for the best in the “best of all possible worlds” – drove an exasperated Voltaire to pen his savage satire Candide.

Anywhen is Leibniz’s mill made flesh in glass, wire and panelling. Lying on the grey Turbine Hall carpet, I couldn’t help but wonder with Voltaire how on earth Leibniz took comfort from his own story. Something is using the Turbine Hall to think with, but we can bet the farm it is not God. Imagine wandering into the toils of some vast, cool and unsympathetic intellect. Imagine the Martian has landed…