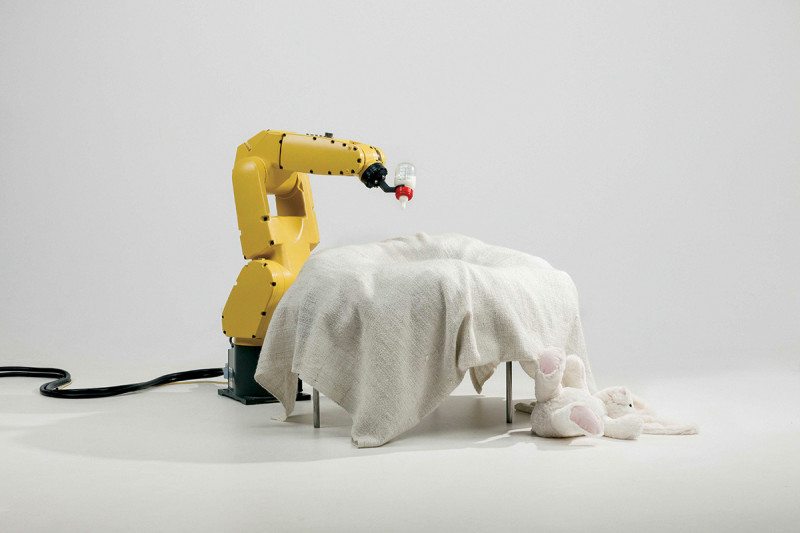 Above the exhibits in the first room of Hello, Robot, a large sign asks: “Have you ever met a robot?” Easy enough. But the questions keep on coming, and by the end of the exhibition, we’re definitely not in Kansas any more: “Do you believe in the death and rebirth of things?” is not a question you want to answer in a hurry. Nor is my favourite, the wonderfully loaded “Do you want to become better than nature intended?”

That we get from start to finish of the show in good order, not just informed but positively exhilarated, is a testament to the wiliness of the three curating institutions: the Vitra Design Museum in Germany, the Design Museum Ghent in Belgium, and MAK in Austria.

One of the show’s advisors, architect Carlo Ratti, head of the MIT Senseable City Lab, nails the trouble with such shows: “Any environment, any city, any landscape can become a robot when it is equipped with sensors, actuators and intelligence.” By the time robots do useful work, they have vanished. Once, we called traffic lights “robots”, now, we barely see them.

Robots, an exhibition currently at London’s Science Museum, gets caught in this bind. By following a “science fiction becomes science fact” trajectory, it creates a show that gets more boring as you work your way through it. Hello, Robot is much cannier: it knows that while science fiction may spin off real artefacts now and again, it never becomes science fact. Does writing down a dream stop you dreaming? Of course not.

Hello, Robot is about design. Its curators explore not only what we have made, but also what we have dreamed. Fine art, speculative designs, commercial products, comic books and movie clips are arranged together to create a glimpse of the robot’s place in our lives and imaginations. Far from disappearing, robots seem more likely to be preparing a jail-break.

The longings, fantasies and anxieties that robots are meant to address are as ancient as they are unrealisable. The robot exists to do what we can imagine doing, but would rather not do. They were going to mow our lawns, now we’re glad of the exercise and we might prefer to have them feed our babies – or look after much older people, as Dan Chen’s 2012 End of Life Care Machine envisions.

This robot mechanically strokes a dying patient – a rather dystopian provocation, or so Chen thought until some visitors asked to buy one. Exhibited here, Chen’s piece is accompanied by a note he wrote: should he encourage people to leave family members alone in their final hours or deny them the comfort of a machine?

Hello, Robot asks difficult questions in a thrillingly designed setting. It is a show to take the children to (just try not to let them see your face in Room 3 as you check on a computer to see if your job’s about to be automated).

There’s a deep seriousness about this show; if design teaches us anything, it is that no one is ever in charge of the future. “The question of whether we need, or even like [robots] is not really ours to ask,” a wallboard opines. “Do we actually need smartphones? Ten years ago, most people would probably have answered no.” Our roles in this “lifeworld” of the future are still to be defined.

Catching the exhibition in Germany, I go round three times until it’s late. I adore industrial robot YuMi’s efforts to roll a ball up a steep incline, and I grin as I walk past a clip of the automated kitchen in Jacques Tati’s 1958 film Mon Oncle. Still, I can’t quite take my eyes off a 2005 photograph of a Chinese factory by Edward Burtynsky, who visited China’s shipyards and industrial plants. Identical figures performing identical actions remind me of iconic British newspaper sketches of weaving machines from the industrial revolution.

We have not outgrown the need for human regimentation – we simply outsource it to cheaper humans. Whether robots become cheap enough to undercut poor people, and what happens if they do, are big questions. But this show can bear them.