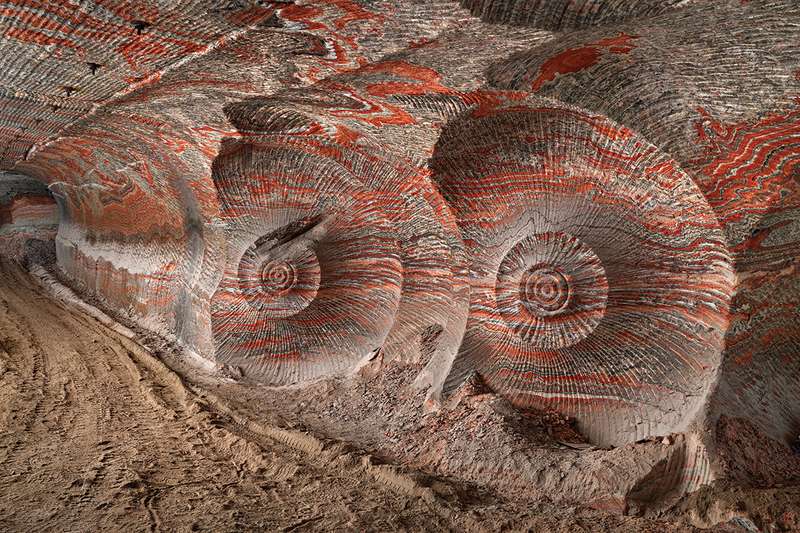 An overview of The Anthropocene Project for New Scientist, 10 October 2018

THE lasting geological impact of our species is clearly visible within the galleries of this potash mine in Russia’s Ural mountains. The Urals contain one of the largest deposits in the world of this salt, one of the most widely used fertilisers. Mining has left behind vast subterranean galleries, their walls machine-carved with enormous ammonite-like whorls.

The Canadian photographer and artist Edward Burtynsky took this photograph for The Anthropocene Project, a collaborative chronicle of geologically significant human activity such as extraction, urbanisation and deforestation. Works from the project are on display at the Art Gallery of Ontario and the National Gallery of Canada, while this image and other photographs feature in Burtynsky’s exhibition The Human Signature, at London’s Flowers Gallery, to 24 November.

This September also saw the release of a documentary film, Anthropocene: The human epoch, and a book of colour photographs by Burtynsky, which includes new writing from author and poet Margaret Atwood.

Through publications, films and immersive media, Burtynksy and his Anthropocene Project collaborators – filmmakers Jennifer Baichwal and Nicholas de Pencier – convey the unsettling visual reality of resource depletion and extinction: how our planet’s surface is being scarred, ground and shovelled into abstract, almost painterly forms.

The effects of mining, in particular, are irreversible. While animal burrows reach a few metres at most, humans carve out networks that can descend several kilometres, below the reach of erosion. They are likely to survive, at least in trace form, for millions or even billions of years.

There is an eerie poetry to this: burrows found in 500-million-year-old sediment tipped off geologists to the massive diversification of animal forms known as the Cambrian explosion. Will our own gargantuan earthworks commemorate more than just a mass extinction event?