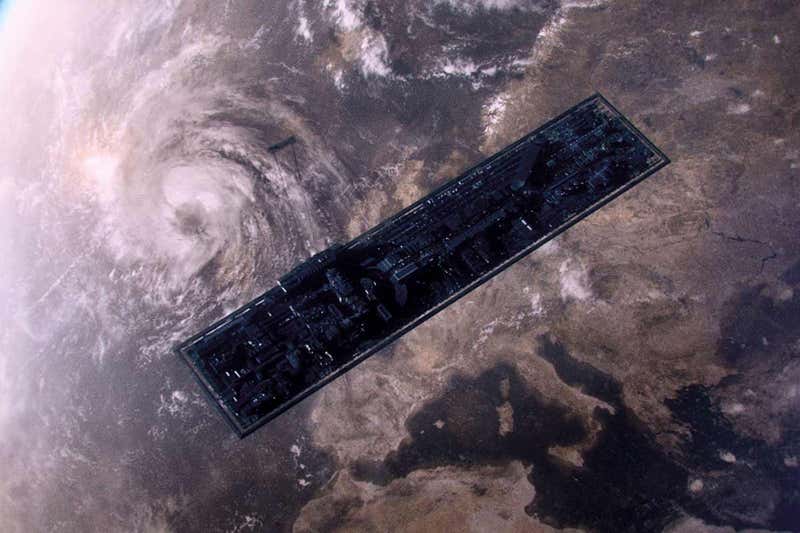 In the opening sequence of the Swedish sci-fi film Aniara, a space elevator rises into low earth orbit to meet an interplanetary cruiser, bound for new settlements on Mars. (The Earth, pillaged to destruction by humanity, is by now literally burning.)

But when we cut to its interior, the elevator turns out to be, well, a night bus. A tight focus on lead actress Emelie Jonsson, staring out a misted-up window into the featureless dark, accentuates, rather than conceals, the lack of set.

The interplanetary cruiser Aniara is a pretty decent piece of model work on the outside but on the inside, it’s a ferry. I know, because work for New Scientist once had me sailing down the coast of Norway on board the same vessel, or one very like it, for an entire week.

Have writer-directors Pella Kagerman and Hugo Lilja turned out a film so low-budget that they couldn’t afford any sets? Have they been inept enough to reveal the fact in the first reel?

Aniara’s journey to Mars is primarily a retail opportunity. Go buy some duty-free knits while your kids knock each other off plastic dinosaurs in the soft-play area. Have your picture taken with some poor bugger on a minimum wage dressed as large, stupid-looking bird. Don’t worry: in a real crisis, there’s always the pitch-and-putt.

When the worst happens — colliding with a piece of space debris, the Aniara is nudged off course into interstellar space with no hope of return or rescue — the lights flicker, someone trips on some stairs, a couple of passengers complain about the lack of information, and the hospitality crew work the mall bearing complementary snacks.

“Transtellar Cruise Lines would like to apologize to passengers for the continuing delay to this flight. We are currently awaiting the loading of our complement of small lemon-soaked paper napkins for your comfort, refreshment and hygiene during the journey.”

Not Aniara, this, but a quotation from Douglas Adams’s peerless radio tie-in novel The Restaurant at the End of the Universe, to which Aniara serves as a particularly bleak twin. Don’t think for a moment this is a film without humour. There’s a scene in which the captain (played with pitch-perfect ghastliness by Arvin Kananian) reassures his castaway passengers that rescue is imminent while playing televised billiards. Balls and pockets; planets and gravity wells. It’s every useless planetary mechanics lecture you’ve ever suffered through and you realise, watching it, that everyone is doomed.

“They awoke screaming and clawing at their straps and life support systems that held them tightly in their seats.” (Adams again, because I couldn’t resist, and besides, it’s as good a summation as any of where Aniara is headed.)

Not only will there be no rescue. It begins to dawn on our heroine, Mimaroben (a sort of ship’s counsellor armed with a telepathic entertainment system that (you guessed it) kills itself) that there there is no such thing as rescue. “You think Mars is Paradise?” she scolds a passenger. “It’s cold.” May as well be here as there, is her conclusion. Death’s a waiting game, wherever you run.

Aniara is based on a long narrative poem by the Nobel laureate Harry Martinson, and the sci-fi writer Theodore Sturgeon, reviewing a 1964 American edition of the poem, said it “transcends panic and terror and even despair [and] leaves you in the quiet immensities”. So there.

But I don’t care how bleak it is. I am sick to the back teeth of those oh-so-futuristic science fiction films, and their conjuring-up of scenarios that, however “dystopic”, are really only there to ravish the eye and numb the mind.

Aniara gets the future right — which is to say, it portrays the future as though it were the present. When we finally build a space elevator, it’s going to be the equivalent of a bus. When we fly to Mars, it’ll be indistinguishable from a ferry. The moment we attain the future, it becomes now, and now is not a place you go in order to exprerience a frisson of wonder or horror. It’s where you’re stuck, trying — and sometimes failing — to scrape together a meaning for it all.