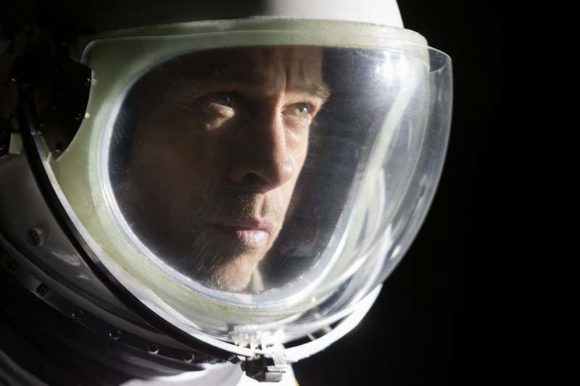 It is 2033. Astronaut Roy McBride (Brad Pitt) is told that his father Clifford, the decorated space explorer, may still be alive, decades after he and the crew of his last mission fell silent in orbit around Neptune.

Clifford’s Lima mission was sent to the outer edges of the heliosphere – the region of the sun’s gravitational influence – the better to scan the galaxy’s exoplanets for intelligent life. Now the Lima’s station’s antimatter generator is triggering electrical storms on distant Earth, and all life in the solar system is threatened.

McBride sets off on a secret mission to Mars. Once there, he is handed a microphone. He reads out a message to his dad. When he finishes speaking, he and the sound engineers pause, as if awaiting an instant reply from Clifford, the message’s intended recipient, somewhere in orbit around Neptune. What?

Eventually a reply is received (ten days later, presumably, given that Mars and Neptune are on average more than four billion kilometres apart). No-one wants to tell McBride what his dad said except the woman responsible for the Mars base (the wonderful Ruth Negga, looking troubled here, as well she might). The truths she shares about Roy’s father convince the audience, if not Roy himself, that the authorities are quite right to fear Clifford, quite right to seek a way to neutralise him, and quite right in their efforts to park his unwitting son well out of the way.

But Roy, at great risk to himself, and with actions that will cost several lives, is determined on a course for Neptune, and a meeting with his dad.

Ad Astra is a psychodrama about solipsistic fathers and abandoned sons, conducted in large part through monologues and close-ups of Brad Pitt’s face. And this is as well, since Pitt’s performance is easily the most coherent and thrilling element in a film that is neither.

Not, to be fair, that Ad Astra ever aspired to be exciting in any straightforward way. Pirates and space monkeys aside (yes, you read that right) Ad Astra is a serious, slow-burn piece about our desire to explore the world, and our desire to make meaning and connection, and how these contrary imperatives tear us apart in the vastness of the cosmic vacuum.

It ought to have worked.

The fact that it’s serious should have worked: four out of five of writer-director James Gray’s previous films were nominated for Cannes Film Festival’s Palme d’Or. Ad Astra itself was inspired by a Pulitzer Prize-winning collection of poems by Tracy K. Smith, all about gazing up at the stars and grieving for her father.

The film’s visuals and sound design should have worked. It draws inspiration for its dizzying opening sequence from the well-documented space-parachuting adventures of Felix Baumgartner in 2012, adopts elsewhere the visual style and sound design of Alfonso Cuarón’s 2013 hit film Gravity, and, when we get to Mars, tips its hat to the massy, reinforced concrete interiors of Denis Villeneuve’s 2017 Blade Runner 2049. For all that, it still feels original: a fully realised world.

The incidental details ought to have worked. There’s much going on in this film to suggest that everyone is quietly, desperately attempting to stabilise their mood, so as not to fly off the handle in the cramped, dull, lifeless interiors beyond Earth. The whole off-world population is seen casually narcotising itself: “Chuck one over here, Candy Man!” Psychological evaluations are a near-daily routine for anyone whose routine brings them anywhere near an airlock, and these automated examinations (shades of Blade Runner 2049 again) seem to be welcomed, as one imagines Catholic confession would be welcomed by a hard-pressed believer.

Even the script, though a mess, might have worked. Pitt turns the dullest lines into understated character portraits with a well-judged pause and the tremor of one highly trained facial muscle. Few other cast members get a word in edgewise.

What sends Ad Astra spinning into the void is its voiceover. Grey is a proven writer and director, and he’s reduced Ad Astra’s plot down to seven-or-so strange, surreal, irreducible scenes, much in the manner of his cinematic hero Stanley Kubrick. Like Kubrick, he’s kept dialogue to the barest minimum. Like Kubrick, he’s not afraid of letting a good lead actor dominate the screen. And then someone – can it really have been Gray himself? – had the bright idea to vitiate all that good work by sticking Roy McBride’s internal monologue over every plot point, like a string of Elastoplasts.

Consequently, the audience are repeatedly kicked out of the state of enchantment they need to inhabit if they’re going to see past the plot holes to the movie’s melancholy heart.

The devil of this film is that it fails so badly, even as everyone is working so conspicuously hard to make a masterpiece. “Why go on?” Roy asks in voiceover, five minutes before the credits roll. “Why keep trying?”