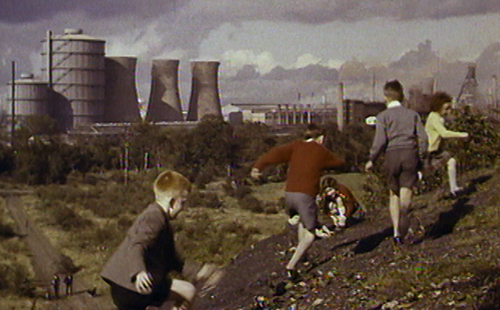 Most environmental documentaries concentrate, on the environment. Most films about the climate crisis focus on people who are addressing the crisis.

Assembled and edited by Emily Munro, a curator of the moving image at the National Library of Scotland, Living Proof is different. It’s a film about demobbed soldiers and gamekeepers, architects and miners and American ex-pats. It’s about working people and their employers, about people whose day-to-day actions have contributed to the industrialisation of Scotland, its export of materials and methods (particularly in the field of off-shore oil and gas), and its not coincidental environmental footprint.

Only towards the end of Munro’s film do we meet protestors of any sort. They’re deploring the construction of a nuclear power plant at Torness, 33 miles east of Edinburgh. Even here, Munro is less interested in the protest itself, than in one impassioned, closely argued speech which, in the context of the film, completes an argument begun in Munro first reel (via a public information film from the mid-1940s) about the country’s political economy.

Assembled from propaganda and public information films, promotional videos and industrial reports, Living Proof is an archival history of what Scotland has told itself about itself, and how those stories, ambitions and visions have shaped the landscape, and effected the global environment.

Munro is in thrall to the changing Scottish industrial landscape, from its herring fisheries to its dams, from its slums and derelict mine-heads to the high modernism of its motorways and strip mills. Her vision is compelling and seductive. Living Proof is also — and this is more important — a film which respects its subjects’ changing aspirations. It tells the story of a poor, relatively undeveloped nation waking up to itself and trying to do right by its people.

It will come as no surprise, as Glasgow prepares to host the COP26 global climate conference, to hear that the consequences of those efforts have been anything but an unalloyed good. Powered by offshore oil and gas, home to Polaris nuclear missiles, and a redundancy-haunted grave for a dozen heavy industries (from coal-mining to ship-building to steel manufacture), Scotland is no-one’s idea of a green nation.

As Munro’s film shows, however, the environment was always a central plank of whatever argument campaigners, governments and developers made at the time. The idea that the Scots (and the rest of us) have only now “woken up to the environment” is a pernicious nonsense.

It’s simply that our idea of the environment has evolved.

In the 1940s, the spread of bog water, as the Highlands depopulated, was considered a looming environmental disaster, taking good land out of use. In the 1950s automation promised to pull working people out of poverty, disease and pollution. In the 1960s rapid communications were to serve an industrial culture that would tread ever more lightly over the mine-ravaged earth.

It’s with the advent of nuclear power, and that powerful speech on the beach at Torness, that the chickens come home to roost. That new nuclear plant is only going to employ around 500 people! What will happen to the region then?

This, of course, is where we came in: to a vision of a nation that, if cannot afford its own people, will go to rack and ruin, with (to quote that 1943 information film) “only the old people and a few children left in the glen”.

Living Proof critiques an economic system that, whatever its promises, can cannot help but denude the earth of its resources, and pauperise its people. It’s all the more powerful for being articulated through real things: schools and roads and pharmaceuticals, earth movers and oil rigs, washing machines and gas boilers.

Reasonable aspirations have done unreasonable harm to the planet. That’s the real crisis elucidated by Living Proof. It’s a point too easily lost in all the shouting. And it’s rarely been made so well.