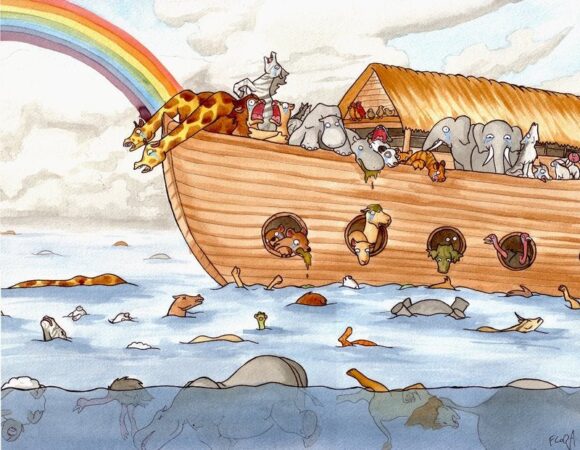 Imagine: you are the last person alive. On your dying day, you cut down the last remaining oak tree, just because you can. Are you morally wrong?

Rebecca Nesbit, a science writer who trained as an ecologist, reports from fields where scientific knowledge and moral intuition trip over each other in disconcerting, sometimes headline-generating ways. Her first book, published in 2017, was Is that Fish in your Tomato? exploring the benefits and risks of genetically modified foods.

In Tickets for the Ark, Nesbit explores the moral complexities of conservation. If push came to shove, and their extinction were imminent, would you choose to preserve bison or the Siberian larch; yellowhammers or Scottish crossbills; salmon or seals? Are native species more important than invasive species? Do animals matter for their charisma, or their edibility? Are we entitled to kill some animals to make room for others?

Working through these and other issues, Nesbit shows how complex and problematic conservation can be. In particular, she draws attention to the way we focus our efforts on the preservation of species. This, she points out, is really just a grand way of saying that we preserve what we can easily see. For the sake of preserving the planet’s biodiversity, we might as easily focus on genes, or on individual strings of DNA, or the general shape of whole ecosystems.

Tickets for the Ark could be read as a catalogue of understandable blunders. We have attempted to limit the spread of invasive species, only to discover that many indigenous species are long-established immigrants. We have attempted to reverse human interference in nature, only to find that life has been shaping the Earth’s geology for about 2.5 billion years.

Far from being a counsel of despair, though, Tickets for the Ark reveals the intellectual vistas those blunders have opened up.

Even supposing it ever existed, we know now that we cannot return to some prelapsarian Eden. All we can do is learn how natural systems change (sometimes under human influence, sometimes not) and use this information to shape our present world according to our values.

In a sense, of course, we have always been doing this. What is agriculture, if not a way of shaping of the land to our demands? At least now, having learned to feed ourselves, we might move on to realise some higher ideals.

Once we accept that “nature” is a human and social idea, and that conservation is about the future, not the past, then most of conservation’s most troubling conundrums and contradictions fall away. The death of the last oak, at the hands of the last human, becomes merely the loss of a category (oak tree) that was defined and valued by humans; a loss that was at some point inevitable anyway. And though this conclusion is counterintuitive and uncomfortable, Nesbit argues that it should be liberating because it leaves us “free to discuss logically what we should save and why, and not just fight an anti-extinction battle that is doomed to failure.”

Above all, we can now consider what conservation efforts will achieve for whole ecosystems, and for biodiversity as a whole, without wasting our time agonising over whether, say, British white-clawed crayfish are natives, or dingoes are a separate species, or whether we are morally entitled to introduce bison to clear the steppe of Siberian larch (a native species, but responsible for covering, and warming, ancient carbon-sequestering permafrost).

Nesbit’s ambitious and entertaining account foresees a dynamic and creative role for conservation, especially in an era of potentially catastrophic climate change. Having freed ourselves of the idea that species belong only in their past ranges, and armed with better information about how ecosystems actually work, it may be time for us to govern the spread of bison and countless other species into new ranges. A brave proposal; but as Nesbit points out, translocation may be the only option for some species.