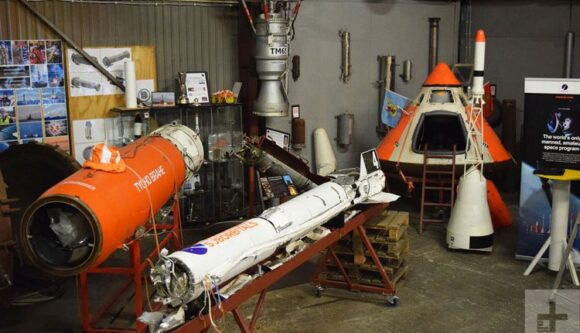 Documentary-maker Rudolph Herzog uses the likelihood (or otherwise) of humans colonising other worlds to structure this peculiar dash through the besetting space concerns of our day; for instance, how will we copulate in space? How much antimatter do we need for a journey to Proxima Centauri B? And how much extra skin do each of us need before it’s worth us bio-engineering human photosynthesis?

Closer to home — and here’s where Last Exit: Space begins — how will the first Martian colonists survive their cosmic ray-doused journey to the Red Planet? How will they stand a planetary surface ten times more radioactive than the surface of the Earth? And how will they survive each other’s company, hunkered down in sub-surface bunkers, “enjoying drinks of recycled urine”?

A traditional documentary might look for answers through the press offices of ESA or NASA. Not so Rudolph Herzog, whose father Werner, narrated and executive-produced this film. In signature Herzog style, Rudolph side-steps the pundits, and goes instead after people whose real lives are already shaped by the conundrums of space travel.

In the Negev desert, the Austrian Space Forum puts a not-too-sophisticated-looking Mars EVA suit through its paces. In Denmark, volunteers at Copenhagen Suborbitals build their first full-size rocket to propel one of their number past the Karman line and into the record books as the world’s first amateur astronaut.

Among the naysayers, space anthropologist Taylor Genovese compares the likely living conditions on Mars to working in an Amazon fulfilment centre, while Judith Lapierre, sole female crewmember of the Moscow Isolation Experiment in the late 1990s, explains how this study in close-proximity living ended with her alleging sexual harrassment against a Russian crewmember — which in turn seems to have led to her ostracism from the space community. If we can’t get along with each other on Earth, what chance do we have in space? Short of any number of technological miracles, a visit to another star will require a starship capable of supporting entire generations of human beings, such are the distances and journey times involved: Lapierre’s testimony suggests to the Herzogs that our spacefaring future will be one of “strife, crime and depravity”.

In that case, we might be better off staying put. This, surprisingly, is the advice of a cleric of the mystical Dawn Valley community in Planaltina, Brazil. The followers of former truck driver Tia Neiva believe they receive energies from visiting extraterrestrials from Capella. These same extraterrestrials advise against bodily journeys between the stars. As the cleric explains, since we evolved on this planet, we are hardly likely to thrive elsewhere.

Last Exit: Space pays a high price for its wide-eyed, catch-all approach to the subject; the lack of analysis on show here is frustrating. On the one hand we are regaled, yet again, with tales of “the human pioneering spirit” — as though humans were destined to explore and become somewhat less than human when not exploring. There’s really no anthropological evidence for this. Many is the culture that has stayed put and literally tended its own garden.

More likely, space corporations wielding mining robots will want as few people in space as possible. (While one isn’t obliged to mention robots in a movie of this sort, I’d contend that without them, it’s very hard indeed to say anything sensible about the economics of outer space.)

Astronaut Mike Foale and astronomer Lucianne Walkowicz provide the documentary with small but penetrating voices of calm. Space is an additional field of human endeavour, not an escape route lest the endeavour go wrong — say, by laying waste to the planet.

I’m as much of a space nut as anyone I know. But, to answer the question Werner Herzog poses at the beginning of his son’s charming, if somewhat unfocused documentary — “Do we need to seek our destiny among the stars?” — I do hope not.