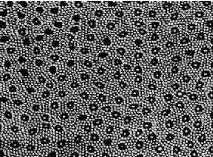 By April, Natalie had begun, now and again, to sleep. Every so often she closed her lids and kept them shut, and when she did, her eyes trembled, stirring the oxygen-rich liquid, called aquaeous humour, that lies between the iris and the cornea. (The rapid-eye movement that accompanies dreams has at least one very practical purpose: it feeds the front of the eye.(1)) This trembling woke the light-sensitive cells of Natalie’s retinas. Stimulated, her retinal cells fired at random, preserving and strengthening their connections with each other.(2) Even before she saw, Natalie went through the motions of dreaming, and those motions taught the cells in her retina to hold hands.
Prepared by dreams, Natalie’s retinal cells took their next lessons from light. Even before birth, the body is no stranger to illumination. Flesh itself lights up a little, every time a nerve fires(3). Perhaps this familiarity with light is why any young nerve cell, transported to the retina – the body’s most light-sensitive surface – will learn to see, just as every seeing cell, moved elsewhere, becomes an ordinary nerve(4).
The womb is not dark: it is easily penetrated by light from the outside world. From November to July of 2003, the month of her birth, Natalie’s retinas grew to seize what news they could from the amniotic murk of her home. They adapted to darkness and to blur. One layer of nerves grew into light-sensitive cells called rods, the better to gather the light. At birth, Natalie was well on the way to acquiring good nocturnal vision. Babies see well at night.
In the glare of day, though, they are all but blind. (It is one of the ironies of birth that it fills our world with light – and blinds us in the process.) A sunny day is a million times brighter than a night-time nursery, and a whole other form of vision is needed to handle such a glare – a form of vision Natalie had not yet got.
Exposed to the light, Natalie’s eyes had not so much to ‘adapt’ to the brightness of day, so much as acquire a whole new way of seeing.
In her retinas lay another set of nerve cells, distinct from the rods and only distantly related to them.(5) At birth, they were little more than ordinary nerve cells. Once exposed to the glare of day, however, they began to change. Natalie will be six before these ‘cones’ of hers are fully grown, packed as tight as they can be into the fovea – that tiny circle on the retina where images are focused and light explodes with colour.
(1)Maurice DM. 1998. ‘An ophthalmological explanation of REM sleep.’ Experimental Eye Research 66 pp139-145. This article includes some interesting background on Maurice’s work.
(2)Siegel JM. 2005. ‘Functional Implications of Sleep Development.’ PLoS Biology 3/5 p178
(3)Tarusov, BN., Polivoda, AI., Zhuravlev, AI. 1961. ‘Study of the faint spontaneous luminescence of animal cells.’ Biophysics 6 pp83-85. (This paper is one of the inspirations behind space physiologist Karl Simanonok‘s diverting ‘endogenous light theory of conciousness’.)
(4)Cepko, C. Interview with Norman Swan on The health report: the retina and the brain, ABC Radio National, Australian Broadcasting Commission, Monday 13 December 1999.
http://www.abc.net.au/rn/talks/
8.30/helthrpt/stories/s73272.htm
Livesey FJ, Cepko CL. 2001. ‘Vertebrate neural cell-fate determination: lessons from the retina.’ Nature reviews: neuroscience 2/2 pp109-18. (PDF)
(5) The distinction between rods and cones had already arisen in the eyes of jawless fish, swimming in Devonian seas around 400 million years ago. See Bowmaker, J. K. 1991. ‘Evolution of photoreceptors and visual pigments.’ Pp. 63–81 in J. R. Cronly-Dillon and R. L. Gregory, eds. Evolution of the eye and visual pigments. CRC Press, Boca Raton, Fla.