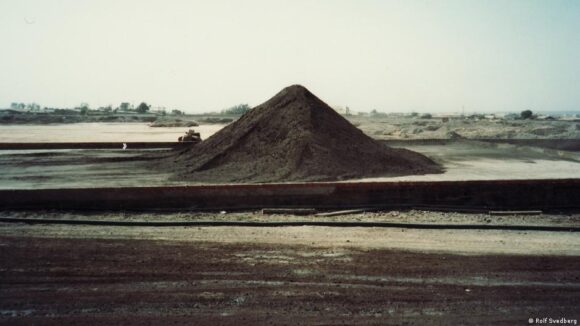 Promel dumped almost the entire consignment beside a row of residential houses in the port town of Arica (current population, over 200,000), and a generation of children grew up playing in the stuff.

The residential quarter, meanwhile — a government housing project for low-income families — grew and grew, until it surrounded the site of contamination.

In 1999 the Chilean government struck an uneasy peace with the victims of this wholly avoidable environmental catastrophe. Promel no longer exists (though its former manager is more than happy to issue not-so-veiled threats of violence to the filmmakers here). Families closest to the site have been evacuated; their properties are now dens for drug dealers.

What’s Boliden’s responsibility in all this? Chilean-born Swiss filmmaker Lars Edman returns to his birthplace and the site of his 2006 documentary The Toxic Playground to follow the legal case assembled by an international legal team against Boliden, a company whose due diligence regarding toxic materials turned out to be not nearly diligent enough. The chief protagonist of The Toxic Playground was Rolf Svedberg, former environmental director of Boliden’s Rönnskär smelting plant in Skelleftea, Sweden. It was his site visit and report that green-lit the sale and transport of what Boliden’s legal team call “material of negative value”. Brought face to face with the consequences of that report, and hosted by a community riddled with cancer, bone deformities and birth defects, Svedberg distress was visible.

Eleven years on, though, Svedberg has the legal case to think of, not to mention his current role: he’s a judge at Sweden’s Supreme Court for the Environment. Svedberg’s displays of fear and dismal self-justifications in Arica are all the more powerful for filmmaker Lars Edman’s obvious sympathy for his old acquaintance.

Boliden’s legal consultants bring in experts who assemble arcane explanations and a particularly ludicrous wind-tunnel experiment to show that living next to tailings containing 17 per cent arsenic could not possibly have affected anyone’s health.

Opposing Boliden are 800 plaintiffs (out of a population of 18000) armed with a single series of urine tests from 2011 and evidence that would be overwhelming were it not so maddeningly anecdotal. An interviewee, Elia, points out houses from her front gate:
“The lady who lived in the house with the bars sold the house and died of cancer. Next door is Dani Ticona. She had aggressive cancer in her head and died too. And her son’s wife had a baby who died. But he doesn’t want to talk to anyone about it. Marisa Pena has got stomach cancer. The lady who bought her house has facial cancer. And on the other side, that gentleman also has cancer. And over there…” On and on like this.

Boliden’s legal team performs a familiar trick, sowing doubt by suggesting that laboratory science and field science are the same thing, and standards of proof are the same for both. In the end, though, the case comes down to public accountability. If Boliden had to deal with ordinary consumers, it would have saved money and reputation long since by owning the problem.

Boliden, however, deals with corporations and governments, and its reputation rests on problem-free operations. It pays Boliden to stay silent.

Law is a rhetorical art, as its finest exponents, from Cicero to John Mortimer, ably demonstrate. We may like to think that justice can be scientifically determined, but in doing so we misunderstand the nature both of science and the law. Tragedy, poverty, blame and shame cannot be reduced to what one legal wag here calls “numbers, preferably with a lot of decimals”.

Protest, eloquence and argument are as essential for justice as they were in the making of this daunting, elegaic documentary.