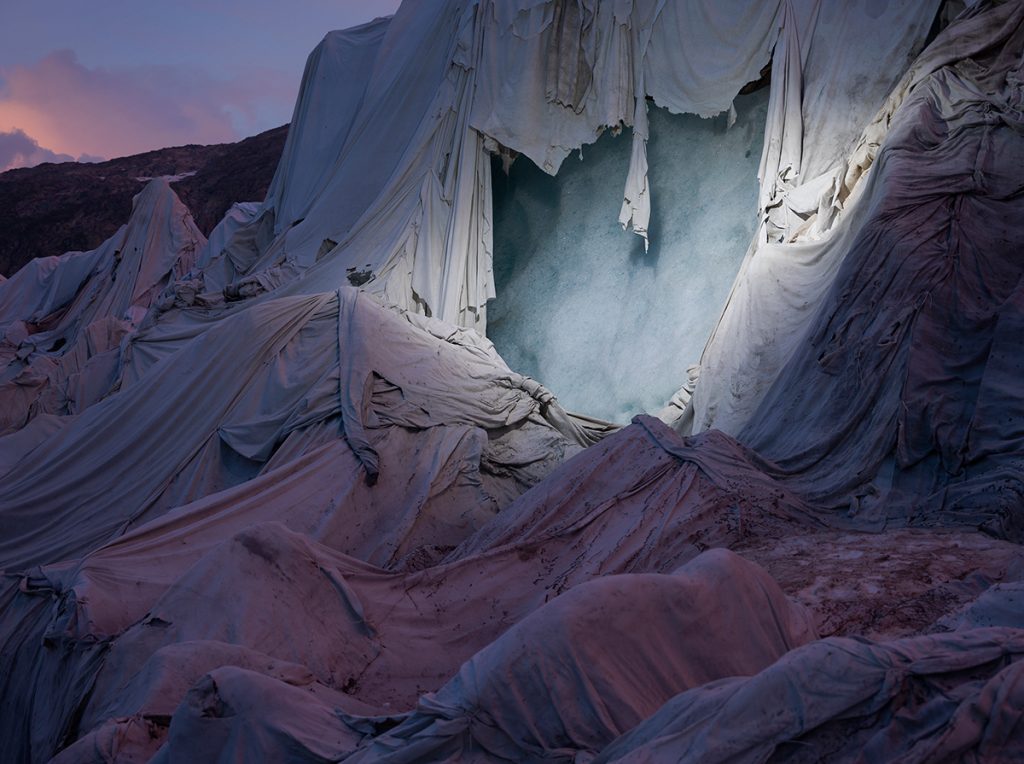 Visit the Rhône Glacier in southern Switzerland, and you are more than likely to wander past a small shop. It’s worth a visit: the owners have carved out an ice grotto, and charge tourists for the eerie and beautiful experience of exploring the inside of their glacier’s mass of blue ice.

Now, though, it’s melting. The grotto is such an important part of their livelihood, some years ago the owners invested 100,000 euros in a special thermal blanket. “It’s kept about 25 metres’ depth of ice from disappearing and has kept the grotto in business,” explains the photographer Simon Norfolk. But a few winters on the mountain have left the blanket in tatters.

“It’s the gesture that fascinates me,” says Norfolk. “There is something insane about trying to reverse the inevitable – a gesture as forlorn and doomed as the glacier itself.”

Norfolk and fellow photographer Klaus Thymann climbed up to the grotto just before dawn, armed with a light attached to a helium balloon that cast a sepulchral light over the scene. “I wanted to recreate the same light you get over a mortuary slab,” Norfolk says.

Emilia van Lynden, artistic director of Unseen Amsterdam, finds the effect as aesthetically chilling as it is beautiful. Of the whole series, called Shroud, she observes: “We’re seeing a glacier being wrapped and prepared for death.”

“There’s next to no photo-journalism here,” van Lynden explains. “None of the images here expect you to take them at face value. They expect you to pay attention and figure things out for yourself. These are works into which you need to invest a little bit of time and effort, to see what the artist is trying to tell you.”

On the face of it, then, the presence at Unseen of Project Pressure, Norfolk and Thymann’s campaigning environmental charity, seems odd. The whole point of the outfit, which has collaborated with the likes of NASA and the World Glacier Monitoring Service, is not just to get us to think about climate change, but to do something positive about it.

But art photography, Norfolk and Thymann believe, is a more effective communication tool than straightforward photo-journalism.

Their point is eloquently made by this 24 hour time-lapse video, created with a thermal imaging camera. By revealing the heat-properties of the scene, Norfolk and Thymann underline the different temperatures in the ice-body versus the surrounding landscape – a key indicator of climate change.

“I believe artists often make the best social and environmental investigators,” says van Lynden. “The trouble with ‘straight’ photography is it looks for stunning subjects and leaves you, well, stunned by them. Glaciers are magnificent in their natural form even as they’re melting away.”

Among van Lynden’s favourite works are photographs by Christopher Parsons, who is better known for photographic portraits of explorers and sports personalities. Parsons won Project Pressure’s open call, and was invited on an expedition to the Himalayas. He collaborated with scientists studying alterations in the microbial life around retreating glaciers, and his photographs, while full of dread, are also accurate records of how changing weather patterns are altering the course of life in these fragile environments.

Adam Broomberg and Oliver Chanarin also take an apparently left-field approach to glacier retreat that nonetheless packs a powerful emotional punch. “Their work is literally a huge photograph of a bone that was found within the Rhône glacier,” says van Lynden. “They’re looking at the glacier as a living archive that now is slowly unravelling. All this information, all this stored data, which has been locked in the ice for however many thousands of years, is being lost.”

She is in no doubt that Project Pressure’s message is clear. If you’re not convinced by one series of photographs, says van Lynden, “then you have six other projects that showcase, each in its individual manner, the irreparable damage we have done to our planet.”