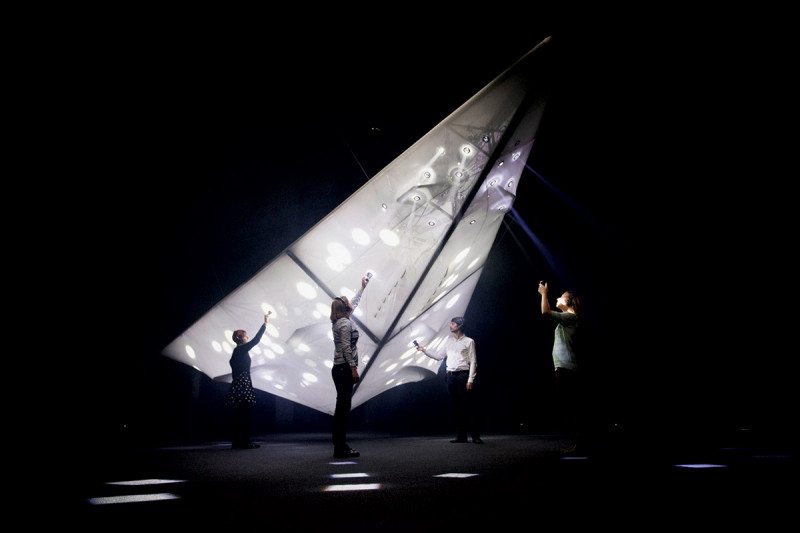 A visit to IWM Duxford for New Scientist, 5 July 2017. The artist Nick Ryan showed me round his new sound sculpture, DX17.

THERE are many stories at the Duxford airfield, Cambridgeshire. How it served British and American military interests for 100 years. Why Alexander Graham Bell wanted to call his daughter Photophone. How a technologist in Tasmania came half way round the world to the UK, only to discover that the technology he was developing was being used to send messages between mountaintops in – of all places – Tasmania.

Luckily for me, I’m being shown around DX17, Duxford’s new sound sculpture, by its creator Nick Ryan, a sound artist who is good at making sense of complicated stories. It was Ryan who recreated the soundscapes of the Yangtze river and spread them along a pedestrian bridge at Gatwick Airport’s Skybridge. He also incorporated the orbits of 27,000 pieces of space junk into a musical instrument called Machine 9.

DX17 is made of netting stretched over a steel skeleton. It’s an aerodynamic abstract with protrusions that suggest design elements from iconic aircraft.

The first thing you notice are the lights: the sculpture is filled with 100 spotlights, their beams playing through the mesh of the sculpture and onto the floor. Yet DX17 contains more sound than vision. Hidden in each beam is a sound recording selected by the Imperial War Museum – some originals, others documents read by Duxford staff and volunteers. Together, they celebrate the base’s 100 years of aeronautical activity.

Weaving these recordings comprehensibly through an object no bigger than a Spitfire was a technical challenge. Ryan and his project partner Sean Malikides opted to use light after deciding that digital solutions were clunky and historically inappropriate.

Each light shines a flickering beam through the mesh of the sculpture – a sound signal carried on light. 3D-printed handsets with a lens at one end turn the signal back to audio, and play it through headphones.

Visitors can press their “light-catchers” to illuminated spots on the sculpture, or catch beams projected from the sculpture onto the floor. Here and there, two beams intersect, and through your headphones, two audio samples blend. As you step away from a light source, the voice in your headphones – an airman’s memoir, instructions to ground staff, a loved one’s letter, a child’s recollections – slowly fade.

It wasn’t until they were testing their system that Malikides came across the pre-history of this “li-fi” tech. Alexander Graham Bell invented it, using sunlight and a deformable mirror to send sound information across space. In 2005, enthusiasts in Tasmania used a similar system to signal between mountaintops some 160 kilometres apart.

Bell considered the photophone more important than the telephone and wanted to name his daughter after the invention. His wife persuaded him that Daisy would be kinder.

There are many stories here. Good hunting. Fade to black. Transmission ends.