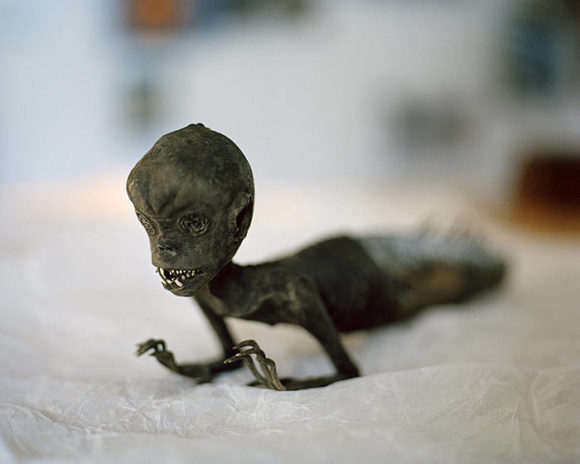 A piece for the Financial Times to mark National Maritime Museum Cornwall’s Monsters of the Deep exhibition, 14 March 2020

In February this year, even as Stuart Slade was in Falmouth assembling the exhibits for a new museum show on sea creatures, a 60ft fin whale was washed up and died on a nearby beach. “Nothing compares to seeing such an animal up close,” he says. “You come away awed, and full of wonder, and just a little bit afraid.”

The objects filling Slade’s gallery for the mysterious Monsters of the Deep exhibition are by turns terrifying, wonderful and funny — sometimes all three. Some are real, some reconstructed, some, like the worrisomely convincing corpse of a mermaid, are assembled out of parts to entertain or gull the public.

The show, at the National Maritime Museum Cornwall, marks the moment Falmouth’s “local” museum learns to punch well above its weight, embracing global phenomena and potentially difficult themes, such as the discomfortingly large role imagination plays in how we see the real world.

Hoaxes, which you might think would be something of an embarrassment here, prove central to the exhibition’s vision. In any event, they can’t be ignored, not while Falmouth’s very own sea monster, Morgawr (first sighted in 1975), could be prowling the bay. According to a report from around the time in the Falmouth Packet: “Mrs Scott said she would ‘never forget the face on that thing’ as long as she lived.”

It transpired that Morgawr was mischievously fabricated from coordinated fictional “sightings”, but the lines between fact and fiction tend to be blurred whenever sea monsters are involved. On September 25 1808, on Stronsay in the Orkney Islands, a large carcass was washed ashore. Edinburgh’s leading natural history society, the Wernerian, decided it was a new species, probably a sea serpent.

By the time the London anatomist Sir Everard Home realised it was more likely a decayed basking shark, the Beast’s reputation had firmly rooted itself in local folklore. Google (if you dare) pictures of dead basking sharks. Their jaws, dorsal and caudal fins disappear first, leaving them with tiny heads and long necks, like ancient reptiles transported from some deep corner of the Mesozoic.

Most sea monsters are real animals, misidentified under extreme circumstances. In 1493, Christopher Columbus “quite distinctly saw three mermaids” off the coast of Haiti. “They are not so beautiful as they are said to be,” he remarked in his journal, “for their faces had some masculine traits.” They were in fact manatees: four-metre long marine mammals with prehensile upper lips and widely spaced eyes (it had been a long voyage).

Most useful to the Falmouth show are the depictions of sea monsters in art, because it’s here that we get to grips with the key question: why have creatures that do not exist persisted in our imaginations since we first put pigment to cave wall?

Some believe sea monsters are a folk memory of creatures long extinct. Native Australian legends of the fearsome Bunyip (head of an emu, body of a dog, tail of a horse) might just scrape by as descriptions of extinct Australian marsupials such as the diprotodon or Palorchestes. But what are we to make of Mishipeshu, which terrified generations of Anishinaabe in the Great Lakes region of Canada? This was an underwater panther, for whom, needless to say, no fossil records exist.

These forms of wonder and fear change across time. The Kraken is supposed to be an octopus, at least according to the Victorian poet Alfred Lord Tennyson. But in 13th-century Greenland, the Kraken was more like a giant crab. Slade, who has been head of public programming in Falmouth for 15 years, says: “The conversations I’ve had about this exhibition tend all to go the same way. People point out that only 5 per cent of the oceans has been explored. From there, it’s just a hop, skip and a jump to saying, ‘There must be something else out there that hasn’t yet been discovered.’”

The inference is mistaken but not obviously so. Back in 1893, the biologist Thomas Henry Huxley wrote in The Times: “There is not an a priori reason that I know of why snake-bodied reptiles, from fifty feet long and upwards, should not disport themselves in our seas as they did in those of the cretaceous epoch which, geologically speaking, is a mere yesterday.”

Palaeontologist Darren Naish, who is lead curator of the Falmouth exhibition, is willing to entertain Huxley’s theory: “His was the right attitude to take at the time, because the life of the deep oceans was only just being discovered.” (Monsters of the Deep makes much of the groundbreaking research expedition led by HMS Challenger, which between 1872 and 1876 discovered a staggering 4,700 new species of marine life.) “Large fossil dinosaurs and early whales, and some amazing gigantic living animals, had been discovered only relatively recently,” Naish points out. “The whale shark, the world’s biggest fish, was a mid 19th-century discovery.”

In an effort to make the new findings comprehensible, folkloric sea monsters were associated with ancient reptiles. Accounts invariably began with the observation that, for years and years, people have talked about giant serpents in the oceans and long-bodied monsters, then go on to point to the actual fossil evidence that such things were a reality. The earliest artists’ impressions have the plesiosaur (50ft long; extended neck; four oar-shaped flippers on a broad, flat body) as a giant, coiling serpent.

How, then, can we be certain that such beasts aren’t out there? In 1998, Charles Paxton, an aquatic ecologist at the Animal Behaviour Research Group at Oxford university, used a statistical technique to estimate the current diversity of large marine animals, based on their rate of discovery.

Extrapolating on data from 1830 to 1995, Paxton produced a graph showing the rate at which these animals are coming to light. He estimated that at most there are around 50 new large species still waiting to be discovered and, according to his graph, we’re likely to come across one every five-and-a-half years or so.

What will they look like? Cryptozoologists — researchers who aspire to the scientific study of undiscovered animals — have for years held out for the existence of radically novel animals, “living plesiosaurs” that have somehow survived from the time of the dinosaurs. These “cryptid” animals come with brilliant names like the super-otter and the father of all turtles (names invented by Bernard Heuvelmans, whose 1968 book In the Wake of the Sea-Serpents kick-started marine cryptozoology). They are meant to be gargantuan, more than 15 metres long, and unlike any creature known to science.

However, as Naish observes, “Of all the animals that have been discovered in recent decades, none has been radically novel.” Recent discoveries have included the Megamouth Shark and a couple of new types of beaked whale (the most recent was spotted by local whalers in Hokkaido, Japan last September). And as each new whale or shark is discovered, the chances of there still being a complete outlier in hiding — something really out there in terms of what’s possible — grow infinitesimally small.

So where did they all go, those writhing sea serpents, gargantuan crabs and city-block-sized squid? An article in an 1875 edition of the West Briton (a local Cornish weekly, still in print) offers clues. It tells the tale of two fishermen, setting nets in Gerrans Bay near Truro, who discovered a serpent “coiled about their floating cork. Upon their near approach, it lifted its head and showed signs of defiance, upon which they struck it forcibly with an oar”. Later, they pursued it and dragged it ashore for a look-see, “after which, it was killed on the rocks and most inconsiderably cast out to sea”.

Which is to say, if sea monsters existed, we must already have killed them. It’s something we’re worryingly good at. “It’s difficult to be tremendously optimistic about the persistence of ecosystems and many animal species,” says Naish, looking to the future of the oceans. “I find it hard to think that marine mammals and ray-finned fishes and sharks will persist into the future.” Instead, the sea monsters of tomorrow are going to be small and numerous, as the oceans, ever warmer and more acidic, fill with cephalopods, jellies, nematode worms and algae.

We can, however, look forward to some new invasions from the deep before that. With whole ecosystems shifting poleward as the planet warms, lionfish, sea snakes, crown-of-thorns starfish and at least three species of shark (hammerhead, ragged tooth and blacktip) are already heading for UK beaches.

Meanwhile, octopuses and squid will fill the niches vacated by over-harvested fish. Their life cycles are so short that they’ll be able to adapt faster than anything with a backbone. Right now, squid are multiplying crazily in British waters, although they’ll eventually lose out to the true inheritors of the oceans: the jellyfish.

In 2009, in the Sea of Japan, the giant Nomura jellyfish (up to two metres in diameter and weighing 200kg) began clogging and bursting fishing nets. This was deemed worthy of headlines at the time, but the jellyfish — most little more than gelatinous bags containing digestive organs and gonads — had barely begun their campaign of conquest. These days, they’re just as likely to be found blocking the seawater intake valves of British nuclear power plants.

For the future, Naish envisions a massively simplified food chain dominated by fast-growing things that can survive in warm seas where there’s very little oxygen. “You’re talking about a vast biomass but made of small detritus feeders living on algae,” he says. Given a few billion years of natural selection, some jellies may evolve into colonial super-organisms quite big enough to stride about on. “I like the idea of giant colonial jellies — like enormous but squishy islands,” he muses, “or big serpentine things that move slowly, drifting along on the weaker, less oxygenated currents of the future.”

That’s not all. A new surface fauna may evolve from mid-water and deep-water plankton, says Naish, “in which case your large surface-dwelling animals would be weird, spiny and translucent. A sea full of translucent, floating crustaceans; I see some merit in that idea.”

Mind reeling, I walk out of the exhibition past a Jenny Haniver. That’s the carcass of a ray or a skate that someone has cut and folded and dried, so that it ends up looking like a fairy, or a mermaid, demon, or dragon. No one really knows what they’re for. In some places, they’re said to have magic powers; most often they were simply made as curios for sailors. You find these sorts of things all over the world, from Mexico to Japan.

Morgawr may be a fake, and the Stronsay Beast just a hillock of rotten fish meat. Still, the monsters of the deep live. And for as long as human beings tread the earth, they cannot die.