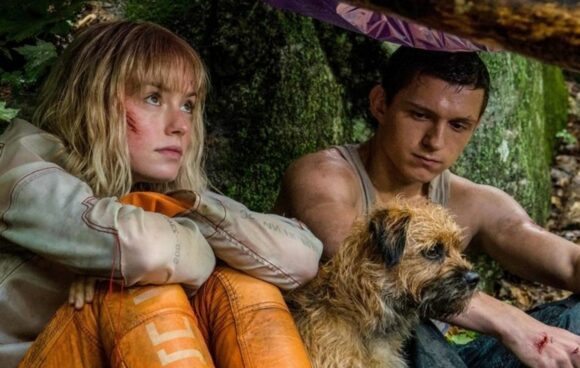 Young Todd Hewitt (Tom Holland) is learning to be a man, and in Prentisstown (ostensibly the only settlement to survive humanity’s arrival on the planet New World) this means keeping your thoughts to yourself.

Something about the planet makes men’s thoughts both audible and visible to others. Men are constantly constantly having to hide their thoughts, by thinking of something else, by rehearsing daily chores, or even just by reciting their own names, again and again. Women were unaffected, apparently, but the native (and rarely glimpsed) Spackle killed them all years ago.

(If this account of things seems a little off, imagine it delivered by an especially troubled-looking Mads Mikkelsen, playing the settlement’s mysterious mayor. Watching his settlement’s secrets come to light, one by one, is one of this film’s chief delights.)

Viola, played by Daisy Ridley, has arrived from space, scouting for a second settlement wave when her landing craft all but burns up, leaving her at the mercy of the men of Prentisstown. You’d think they’d be glad of her arrival and her company — but you would be wrong.

Chaos Walking arrives under something of a cloud; to begin with, no one could fix on a script they liked. Charlie Kaufmann (of Being John Malkovich fame) got first bite of the cherry, before the project was passed from pillar to post and ended up being crafted by Christopher Ford (Spider-Man: Homecoming (2017)) and Patrick Ness, author of the book on which this film is based, The Knife of Never Letting Go. Chaos Walking should, by all measures, have ended up a mess.

But if it’s not the blockbuster the studio expected or needed, Chaos Walking is nonetheless a real accomplishment: a disconcerting little masterpiece of sensitive acting and well-judged design.

In this film, men quite literally cannot shut up, and in her very first conversation with Mayor Prentiss, it dawns on Viola that this gives her huge advantages. She can lie, she can keep secrets, and she’s the only one here who can — crucial points made almost entirely in dialogue-less reaction shots. Daisy Ridley’s talents weren’t wildly well served in the last three Star Wars films, but she’s given her head here.

Tom Holland’s Todd is a naif who must save Viola and get her to a neighbouring settlement he never even realised existed — a place where women survive and (understandably) dominate.

Todd is the model of what a man must be in this New World: polite, honest, and circumspect. Holland’s bid to “be a man” in such circumstances is anything but straightforward — but Holland keeps our sympathy and our regard.

Indeed, the great strength of Chaos Walking is that it interrogates gender roles by creating genuine difficulties for its characters. Even Prentisstown’s lunatic and misogynist preacher Aaron — surely David Oyelowo’s most unrewarding role yet, all beetle brows and gnashing teeth — turns out to make a dreadful kind of sense.

No gender is well served by the strange telepathic gifts bestowed on half the human settlers of New World. Only good will and superhuman patience prevents human society going up like a powder keg.

This has happened once, in Prentisstown, and — given the weirdly stalled settlement of the planet — it has almost certainly happened elsewhere. The planet’s architecture and technology are an uneasy and creative mishmash of battered industrial machinery and Western-genre make-do-and-mend. The effect is oddly unsettling, particularly in the sequence where horse-riders pursue each other through a forest that had very obviously been planted in rows.

Chaos Walking is not a western. Neither is it, in any easy sense, a feminist fable. Chaos Walking is about people’s struggles in unreasonable circumstances, and for all the angst bound up in its premise, it becomes, by the end, a charming and uplifting film about love and reconciliation.