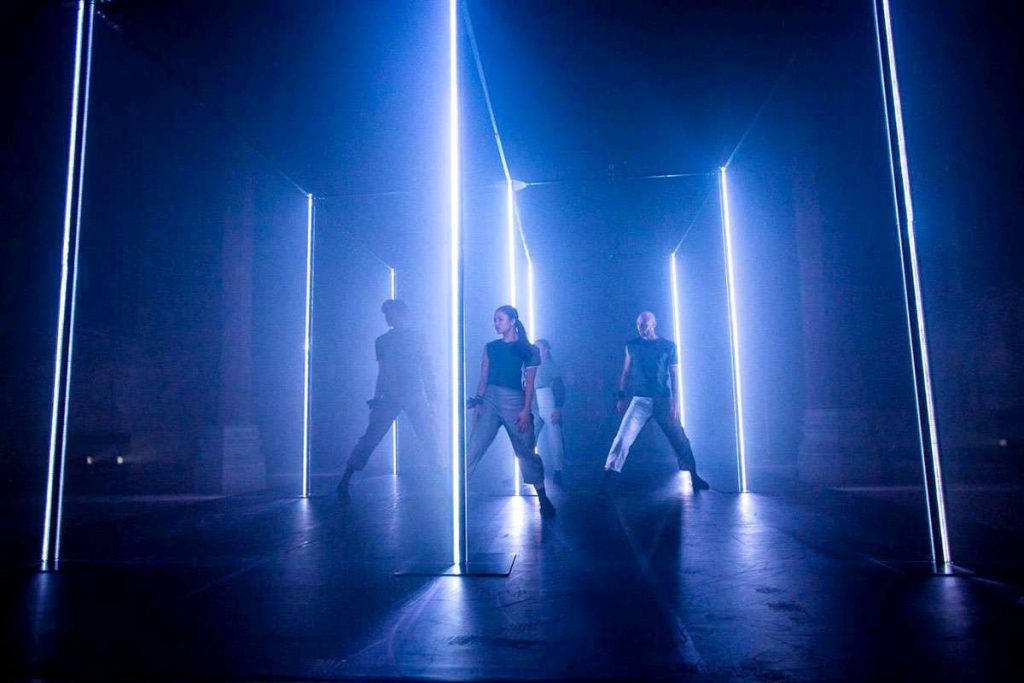 The dancers performing Strange Stranger at this year’s inaugural York Mediale (tagline: “Art, Meet the Future”) weren’t just moving about in the shadows. They were leaving shadows behind them, thanks to wrist-worn tracking devices and a complex, computer-driven LED-lit set. And over the course of the festival, which ran from 27 September to 6 October this year, visitors were able to explore the set and leave their own shadows in the air.

Alexander Whitley and his dance company have caught our eye before with 8 Minutes, a visceral and surprisingly true-to-fact dance about the internal processes of the sun. Their new piece is a play on the concept of the “data shadow” – a digital profile formed from all the information we unintentionally leave behind through our routine use of technology. That Whitley has turned to the dark for Strange Stranger says something about the eeriness that’s been slipping into contemporary art for some while.

It’s a mordant piece, and perhaps technically not quite there yet, because the dancers aren’t just leaving shadows; they’re actually getting lost in shadows. The net effect of all this energetic movement, then, is a sense of creeping powerlessness.

The same mood – part melancholy, part anxious – also marks Strata Rock Dust Stars, the flagship exhibition at this new media arts festival, which, it’s just been announced, is due to return in 2020.

Curated by Mike Stubbs, director of Liverpool’s FACT gallery, the exhibition runs until 25 November. Melancholy notes are struck by David Jacques, whose installation Oil is the Devil’s Excrement (2017) reveals by degrees that we have never been in control of the oil that powers our civilisation: it’s oil that has been in control of us. (You don’t have to take his word for it, either: the title of the piece is actually a quote Juan Pablo Perez Alfonzo, the founder of OPEC.)

Isaac Julien’s Stones Against Diamonds is another powerful hymn to our fatal misreading of our own values. Shot in a remote region of south-east Iceland in 2015, it juxtaposes luxury goods with jewel-like icescapes and ice blocks and advertisement-shiny waterfalls. Ice, it transpires, is the ultimate luxury good being celebrated (or mourned) among these multiple video panels, by a glamorous isolated figure (Vanessa Myrie) who, we can only suppose, has consumed everything else there is to consume.

Like every other living thing on this planet, humans are destined to expand to exploit all resources available to them, at which point they’ll plunge off a demographic cliff. There’s no tragedy in this. The tragedy is that we know it’s happening. We know the destruction we’re causing. We know what the consequences will be.

Strata Rock Dust Stars offers the visitor various coping mechanisms by which we might deal with this realisation. Liz Orton’s The Longest and Darkest of Recollections (2016) fuses geology, photography and memoir in a museum-like display that captures perfectly our poignant struggle to assign meaning to a world far older and bigger and dumber than ourselves. Agnes Meyer-Brandis’s on-going obsession with moon-dwelling geese (the conceit of the 17th-century bishop and proto-sf author Francis Godwin) offers fancy and absurdity as a palliative for our tragic condition. In a delicious parody of all those Anthropocene maunderings, her latest venture, Moon Core (2018), asks whether the droppings and egg-shells of moon geese might not have entered the lunar geological record.

When fancy and imagination collide with the real world, however, the result is not always charming. Worlds in the Making, an early video work by Ruth Jarman and Joe Gerhardt, who make work under the name Semiconductor, creates, if you can picture such a thing, a sort of paranoid geology, perfectly false and perfectly believable, and a dreadful reminder of how much we rely on trust for our understanding of the world.

Another way of coping with the tragedy of the human condition is to laugh at it. Away from the flagship exhibition, I stumbled across a new work by Rodrigo Lebrun, a young Brazilian-born artist who has very little patience with the seriousness of much contemporary art. “It’s just another way of ostracising the public,” he told me, as he unlocked the shipping container where his barely finished video installation, Green (Screen) Dreams, advertises the apocalyptic charm of Sunthorpe — think grim Humber Valley Scunthorpe rebranded as a tropical holiday destination minutes before a collapsed ice shelf-triggered tsunami arrives, coincident with the entire planet bursting into flame.

Hijacking the hyperbolic visuals of television advertising, Lebrun has created an advertisement for the future: a world in which the vagiaries of environmental collapse afford us little pockets of tremendous commercial opportunity in the seconds before Armageddon, and where all the difficult questions about population and pollution, environmental integrity and resource depletion, are breezily crammed into an eyeblink-fast on-screen reminder that “Terms and Conditions Apply”.

“Instead of creating solutions, we’ve been creating these weird alternate realities,” Lebrun says, “CGI-driven entertainments to numb the senses.” His installation blows the gaffe on this confidence trick. It’s frightening, and funny, and above all it’s energising. Commissioned by Invisible Dust, an environmental arts charity we last encountered driving a gigantic mobile cinema around the Scottish coast, Green (Screen) Dreams gets its next outing At North Lincolnshire Museum from 19 January next year. But that’s surely only the beginning for the piece and for Lebrun himself, whose combination of wit and savagery seems as rare, these days, as a moon-goose’s teeth.