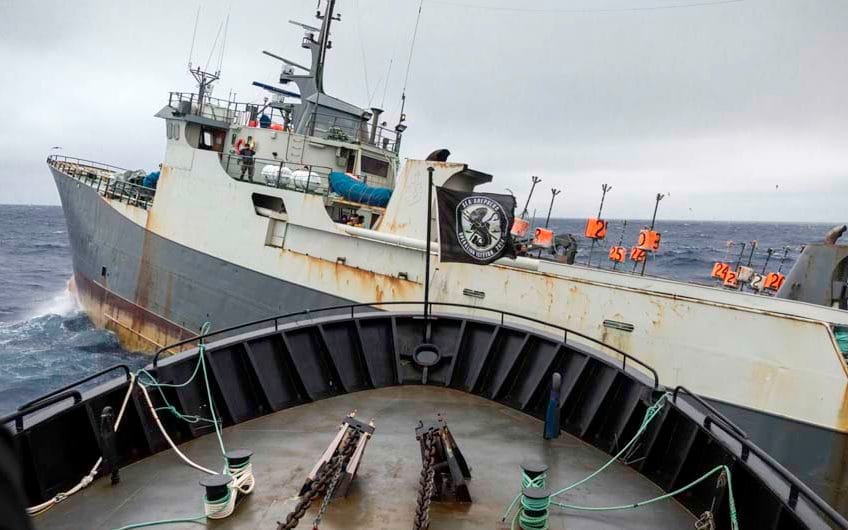 Reading Catching Thunder by by Eskil Engdal and Kjetil Saeter for the Daily Telegraph, 1 April 2018

In March 23 1969 the shipbuilders of Ulsteinvik in Norway launched a stern trawler called the Vesturvon. It was their most advanced factory trawler yet, beautiful as these ships go, and big: outfitted for a crew of 47.

In 2000, after many adventures, the ship suffered a midlife crisis. Denied a renewal of their usual fishing quota, its owners partnered up with a Russian company and sent the ship, renamed the Rubin, to ply the Barents Sea. There, in the words of Eskil Engdal and Kjetil Saeter, two Norwegian journalists, the ship slipped ineluctably into “a maelstrom of shell corporations, bizarre ships registers and shady expeditions”.

In the years that followed, the ship changed its name often: Kuko, Wuhan No 4, Ming No 5, Batu 1. Its crew had to look over the side of the ship at the name plate, attached that morning to the stern, to find out which ship they were on. Flags from countries such as Equatorial Guinea, Mauritania and Panama were kept in a cardboard box.

It fell to a Chilean, Luis Cataldo, to be captaining the ship (then named the Thunder) on December 17 2014 – the day when, off Antarctica’s windy Banzare Bank, in the middle of an illegal fishing expedition, it was spotted by the Bob Barker, a craft belonging to the Sea Shepherd Conservation Society. The Bob Barker’s captain got on the radio and told Cataldo his vessel was wanted by Interpol and should follow him to port.

Cataldo retorted that he wasn’t inclined to obey a ship whose black flag bore a skull (albeit with a shepherd’s crook and a trident instead of crossbones). And it is fair to say that the Sea Shepherd organisation, whose mission “is to end the destruction of habitat and slaughter of wildlife in the world’s oceans”, has enjoyed a fairly anomalous relationship with nautical authority since its foundation in 1977.

So began the world’s longest sea chase to date, recorded with flair and precision in Catching Thunder, Diane Oatley’s effortlessly noir translation of Engdal and Saeter’s 2016 Norwegian bestseller. The book promises all the pleasures of a crime novel, but it is after bigger game: let’s call it the unremitting weirdness of the real world.

This is a book about fish – and also a chase narrative in which the protagonists spend most of the time sailing in circles and sending each other passive-aggressive radio messages. (“You are worried about the crew, and now all the Indonesians are nervous,” Cataldo complains. “One person attempted to take his life. Over.”)

It’s about attempting to regulate the movement of lumps of steel weighing more than 650 tons which, if they want, can thug their way out of any harbour whether they’ve been “impounded” or not, and it’s about the sheer slow-mo clumsiness of ship-handling.

At one point the Thunder “moves in circles, directing a searchlight on the Bob Barker, then suddenly stops and drifts for a few hours. Then the mate puts the ship in motion again, heading for a point in the middle of nowhere.” There’s no Hollywood hot-headedness here. The violence here is rare, veiled and, when it comes, unstoppable and ice-cold.

The Thunder was wanted for hunting the Patagonian toothfish, a protected species of “petulant and repulsive” giants that can grow to a weight of 120kg and live more than 50 years. When the Bob Barker caught sight of it in the Southern Ocean, no one could have guessed that their chase would last for 110 days.

Stoked by Sea Shepherd’s YouTube campaign, the pursuit became a cause célèbre and the Bob Barker’s hardened crew were prepared for the long game: “As long as the two ships are operating without using the engines, it is only the generators that are consuming fuel. If it continues like this, they can be at sea for two years.”

Engdal and Saeter must keep their human story going while doing justice to the scale of their subject. At the start, their subject is the fishing industry, in which a cargo of frozen toothfish can go “on a circumnavigation of the world from the Southern Ocean to Thailand, then around the entire African continent, past the Horn of Africa, across the Indian Ocean and into the South China Sea before ending up in Vietnam.” But they also have something to say about the planet.

Suppose you catch fish for a living. If you saw that your catch was dwindling, you might limit your days at sea to ensure that you can continue to fish that species in future years. This isn’t “ecological thinking”; it’s simple self-interest. In the fishing industry, though, self-interest works differently.

And in a chapter about Chimbote in Peru, the authors hit upon a striking metonym for the global mechanisms denuding our seas.

The Peruvian anchovy boom of the late 2000s turned Chimbote from a sleepy village into Peru’s busiest fishing port. Fifty factories exuded a stench of rotten fish, and pumped wastewater and fish blood into the ocean, to the point where the local ecosystem was so damaged that an ordinary El Niño event finished off the anchovy stocks for good.

The point is this: fishing companies are not fisherfolk. They are companies: lumps of capital incorporated to maximise returns on investment. It makes no sense for an extraction company to limit its consumption of a resource.

Once stocks have been reduced to nothing, the company simply reinvests its capital in some other, more available resource. You can put rules in place to limit the rapaciousness of the enterprise, but the rapaciousness is baked in. Rare resources are doomed to extinction eventually because the rarer a resource is, the more expensive it is, and the more incentive there is to trade in it. This is why, past a certain point, rare stocks hurtle towards zero.

Politically savvy readers will find, between the lines, an account here of how increasingly desperate governments are coming to a rapprochement with the Sea Shepherd organisation, whose self-consciously piratical founder Paul Watson declared in 1988: “We hold the position that the laws of ecology take precedence over the laws designed by nation states to protect corporate interests.”

Watson’s position seems legally extreme. But 30 years on, with an ecological catastrophe looming, many maritime law enforcers hardly care. Robbed of income and ecological capital, some countries are getting gnarly. In 2016, Indonesian authorities sank 170 foreign fishing vessels in less than two years. They would like to sink many more: according to this daunting thriller, 5,000 illegal fishing vessels ply their waters at any one time.