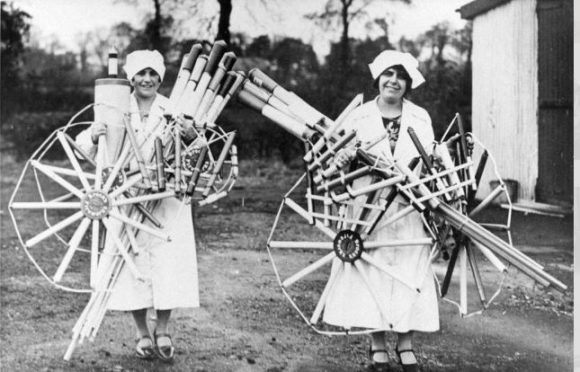 Reading Gunpowder and Glory: The Explosive Life of Frank Brock OBE by Harry Smee and Henry Macrory for the Spectator, 21 March 2020

Early one morning in October 1874, a barge carrying three barrels of benzoline and five tons of gunpowder blew up in the Regent’s Canal, close to London Zoo. The crew of three were killed outright, scores of houses were badly damaged, the explosion could be heard 25 miles away, and “dead fish rained from the sky in the West End.”

This is a book about the weird, if obvious, intersection between firework manufacture and warfare. It is, ostensibly, the biography of a hero of the First World War, Frank Brock. And if it were the work of more ambitious literary hands, Brock would have been all you got. His heritage, his school adventures, his international career as a showman, his inventions, his war work, his violent death. Enough for a whole book, surely?

But Gunpowder and Glory is not a “literary” work, by which I mean it is neither self-conscious nor overwrought. Instead Henry Macrory (who anyway has already proved his literary chops with his 2018 biography of the swindler Whitaker Wright) has opted for what looks like a very light touch here, assembling and ordering the anecdotes and reflections of Frank Brock’s grandson Harry Smee about his family, their business as pyrotechnical artists, and, finally, about Frank, his illustrious forebear.

I suspect a lot of sweat went into such artlessness, and it’s paid off, creating a book that reads like fascinating dinner conversation. Reading its best passages, I felt I was discovering Brock the way Harry had as a child, looking into his mother’s “ancient oak chests filled with papers, medals, newspapers, books, photographs, an Intelligence-issue knuckleduster and pieces of Zeppelin and Zeppelin bomb shrapnel.”

Come the twentieth century, Brock’s shows were a signature of Empire. It would take a write like Thomas Pynchon to do full justice to “a sixty foot-high mechanical depiction of the Victorian music-hall performer, Lottie Collins, singing the chorus of her famous song ‘Ta-ra-ra-boom-de-ay’ and giving a spirited kick of an automated leg each time the word ‘boom’ rang out.”

Frank was a Dulwich College boy, and one of that generation lost to the slaughter of the Great War. A spy and an inventor — James Bond and Q in one — he applied his inherited chemical and pyrotechnical genius to the war effort — by making a chemical weapon. It wasn’t any good, though: Jellite, developed during the summer of 1915 and named after its jelly-like consistency during manufacture, proved insufficiently lethal.

On such turns of chance do reputations depend, since we remember Frank Brock for his many less problematic inventions. Dover flares burned for seven and a half minutes
and lit up an area of three miles radius, as Winston Churchill put it, “as bright as Piccadilly”. U boats, diving to avoid these lights, encountered mines. Frank’s artificial fogs, hardly bettered since, concealed whole British fleets, entire Allied battle lines.

Then there are his incendiary bullets.

At the time of the Great War a decent Zeppelin could climb to 20,000 feet, travel at 47 mph for more than 1,000 miles, and stay aloft for 36 hours. Smee and Mcrory are well within their rights to call them “the stealth bombers of their time”.

Brock’s bullets tore them out of the sky. Sir William Pope, Brock’s advisor, and a professor of chemistry at Cambridge University, explained: “You need to imagine a bullet proceeding at several thousand feet a second, and firing as it passes through a piece of fabric which is no thicker than a pocket handkerchief.” All to rupture a gigantic sac of hydrogen sufficiently to make the gas explode. (Much less easy than you think; the Hindenburg only crashed because its entire outer envelope was set on fire.)

Frank died in an assault on the mole at Zeebrugge in 1918. He shouldn’t have been there. He should have been in a lab somewhere, cooking up another bullet, another light, another poison gas. Today, he surely would be suitably contained, his efforts efficiently channeled, his spirit carefully and surgically broken.

Frank lived at a time when it was possible — and men, at any rate, were encouraged — to be more than one thing. That this heroic idea overreached itself — that rugby field and school chemistry lab both dissolved seamlessly into the Somme — needs no rehearsing.

Still, we have lost something. When Frank went to school there was a bookstall near the station which sold “a magazine called Pluck, containing ‘the daring deeds of plucky sailors, plucky soldiers, plucky firemen, plucky explorers, plucky detectives, plucky railwaymen, plucky boys and plucky girls and all sorts of conditions of British heroes’.”

Frank was a boy moulded thus, and sneer as much as you want, we will not see his like again.