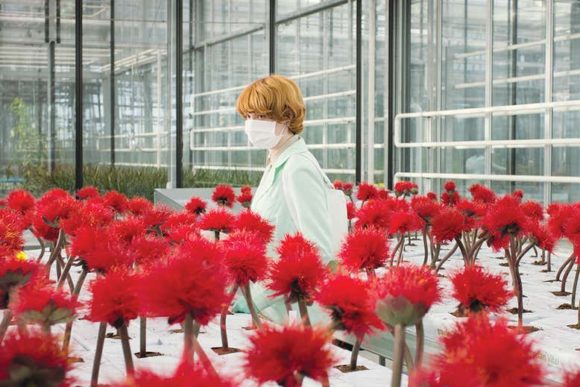 THEY are red, they have stalks that look like eels, and no leaves. But Karl, the boss of the laboratory – played by the unsettling David Wilmot – has his eye on them for the forthcoming flower fair. He tells visiting investors that these genetically engineered creations are “the first mood-lifting, antidepressant, happy plant”.

Ben Whishaw’s character, Chris, smirks: “You’ll love this plant like your own child.”

Owning and caring for a flower that, treated properly, will emit pollen that can induce happiness, would surely be a good thing for these characters. But the plant has been bred to be sterile, and it is determined to propagate itself by any means necessary.

Little Joe is an exercise in brooding paranoia, and it feeds off some of the more colourful fears around the genetic modification of plants.

Kerry Fox plays Bella, whose disappointments and lack of kids seem to put her in the frame of mind to realise what these innocent-looking blooms are up to. “The ability to reproduce is what gives every living thing meaning!” she exclaims. Her colleagues might just be sceptical about this because she is an unhappy presence in the lab, or they may already have fallen under the sway of Little Joe’s psychoactive pollen.

Popular fears around GM – the sort that dominated newspapers and scuppered the industry’s experimental programmes in the mid-1990s – are nearly as old as the science of genetics itself.

At about the turn of the 20th century, agricultural scientists in the US combined inbred lines of maize and found that crop yields were radically increased. Farmers who bought the specially bred seed found that their yields tailed off in subsequent years, so it made sense to buy fresh seed yearly because the profits from bigger crops more than covered the cost of new seeds.

In the 2000s, Monsanto, a multinational agribusiness, added “terminator” genes to the seed it was developing to prevent farmers resowing the product of the previous year’s crop. This didn’t matter to most farmers, but the world’s poorest, who still rely on replanting last year’s seed, were vociferous in their complaints, and a global scandal loomed.

Monsanto chose not, in the end, to commercialise its terminator technologies, but found it had already created a monster: an urban myth of thwarted plant fecundity that provides Jessica Hausner’s Little Joe with its science fictional plot.

What does Little Joe’s pollen do to people? Is it a vegetal telepath, controlling the behaviour of its subjects? Or does it simply make the people who enjoy its scent happier, more sure of themselves, more capable of making healthy life choices? Would that be so terrible? As Karl says, “Who can prove the genuineness of feelings? Moreover, who cares?”

Well, we do, or we should. If, like Karl, we come to believe that the “soul” is nothing more than behaviour, then people could become zombies tomorrow and no one would notice.

Little Joe’s GM paranoia may set some New Scientist readers’ teeth on edge, but this isn’t ultimately, what the movie is about. It is after bigger game: the nature of human freedom.