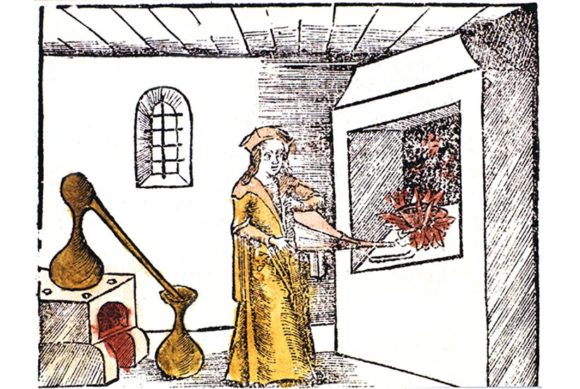 Reading Antimony, Gold, and Jupiter’s Wolf: How the Elements Were Named, by
Peter Wothers, for The Spectator, 14 December 2019

Here’s how the element antimony got its name. Once upon a time (according to the 17th-century apothecary Pierre Pomet), a German monk (moine in French) noticed its purgative effects in animals. Fancying himself as a physician, he fed it to “his own Fraternity… but his Experiment succeeded so ill that every one who took of it died. This therefore was the reason of this Mineral being call’d Antimony, as being destructive of the Monks.”

If this sounds far-fetched, the Cambridge chemist Peter Wothers has other stories for you to choose from, each more outlandish than the last. Keep up: we have 93 more elements to get through, and they’re just the ones that occur naturally on Earth. They each have a history, a reputation and in some cases a folklore. To investigate their names is to evoke histories that are only intermittently scientific. A lot of this enchanting, eccentric book is about mining and piss.

There was no reliable lighting or ventilation; the mines could collapse at any point and crush the miners; they could be poisoned by invisible vapours or blown up by the ignition of pockets of flammable gas. Add to this the stifling heat and the fact that some of the minerals themselves were poisonous and corrosive, and it really must have seemed to the miners that they were venturing into hell.

Above ground, there were other difficulties. How to spot the new stuff? What to make of it? How to distinguish it from all the other stuff? It was a job that drove men spare. In a 1657 Physical Dictionary the entry for Sulphur Philosophorum states simply: ‘God knows what the Chymists mean by it.’

Today we manufacture elements, albeit briefly, in the lab. It’s a tidy process, with a tidy nomenclature. Copernicum, einsteinium berkelium: neologisms as orderly and unevocative as car marques.

The more familiar elements have names that evoke their history. Cobalt, found in
a mineral that used to burn and poison miners, is named for the imps that, according to the 16th-century German Georgius Agricola ‘idle about in the shafts and tunnels and really do nothing, although they pretend to be busy in all kinds of labour’. Nickel is kupfernickel, ‘the devil’s copper’, an ore that looked like valuable copper ore but, once hauled above the ground, appeared to have no value whatsoever.

In this account, technology leads and science follows. If you want to understand what oxygen is, for example, you first have to be able to make it. And Cornelius Drebbel, the maverick Dutch inventor, did make it, in 1620, 150 years before Joseph Priestley got in on the act. Drebbel had no idea what this enchanted stuff was, but he knew it sweetened the air in his submarine, which he demonstrated on the Thames before King James I. Again, if you want a good scientific understanding of alkalis, say, then you need soap, and lye so caustic that when a drunk toppled into a pit of the stuff ‘nothing of him was found but his Linnen Shirt, and the hardest Bones, as I had the Relation from a Credible Person, Professor of that Trade’. (This is Otto Tachenius, writing in 1677. There is lot of this sort of thing. Overwhelming in its detail as it can be, Antimony, Gold, and Jupiter’s Wolf is wickedly entertaining.)

Wothers does not care to hold the reader’s hand. From page 1 he’s getting his hands dirty with minerals and earths, metals and the aforementioned urine (without which the alchemists, wanting chloride, sodium, potassium and ammonia, would have been at a complete loss) and we have to wait till page 83 for a discussion of how the modern conception of elements was arrived at. The periodic table doesn’t arrive till page 201 (and then it’s Mendeleev’s first table, published in 1869). Henri Becquerel discovers radioactivity barely four pages before the end of the book. It’s a surprising strategy, and a successful one. Readers fall under the spell of the possibilities of matter well before they’re asked to wrangle with any of the more highfalutin chemical concepts.

In 1782, Louis-Bernard Guyton de Morveau published his Memoir upon Chemical Denominations, the Necessity of Improving the System, and the Rules for Attaining a Perfect Language. Countless idiosyncracies survived his reforms. But chemistry did begin to acquire an orderliness that made Mendeleev’s towering work a century later — relating elements to their atomic structure — a deal easier.

This story has an end. Chemistry as a discipline is now complete. All the major problems have been solved. There are no more great discoveries to be made. Every chemical reaction we do is another example of one we’ve already done. These days, chemists are technologists: they study spectrographs, and argue with astronomers about the composition of the atmospheres around planets orbiting distant stars; they tinker in biophysics labs, and have things to say about protein synthesis. The heroic era of chemical discovery — in which we may fondly recall Gottfried Leibniz extracting phosphorus from 13,140 litres of soldiers’ urine — is past. Only some evocative words remain; and Wothers unpacks them with infectious enthusiasm, and something which in certain lights looks very like love.