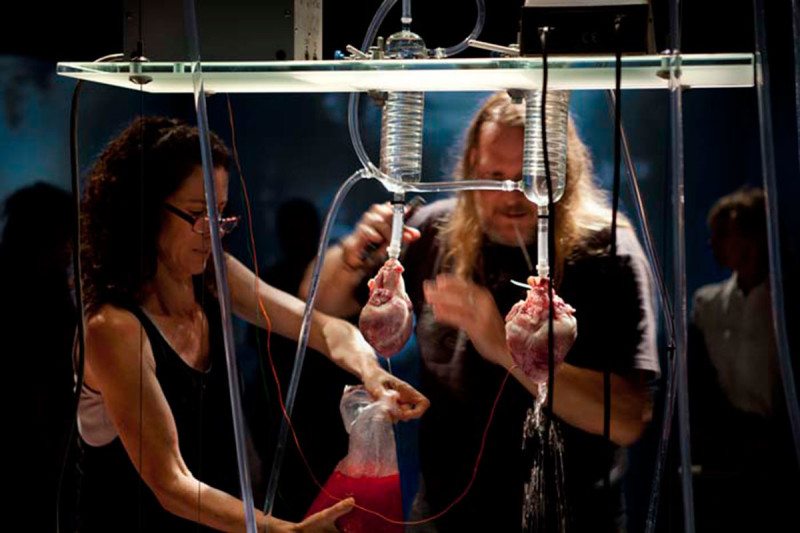 It caused a storm on social media when it was first shown in 2013, but Dan Glaser, director of Science Gallery London, has a deep and obvious affection for Casting Off My Womb, a scarf knitted over the course of a month by Australian artist Casey Jenkins using spools of yarn stored daily in her vagina. The scarf hangs across the gallery hosting Blood: Life uncut as a visceral and compellingly complex record of one woman’s menstrual cycle. “How else could you ever present that much data?” Glaser enthuses.

“Data” is one of Glaser’s watchwords. So is “visualisation”. He claims not to know much about art. It’s a pose, of course, but a useful one. After 15 years as a research neurologist, Glaser has reinvented himself as an impresario of science communication. His approach is bold: to wrest the gallery space off the art world and apply it to his own, very different ends.

This is the latest in a series of small, off-site exhibitions, and it’s in an out-of-the-way former industrial space in Peckham, south London, because the actual Science Gallery London building won’t be ready until next year.

Everything on show is meant to illustrate medical and scientific ideas. This is why they are here: they are only coincidentally works of performance art, or conceptual art, or what have you.

Normally, this approach encourages dull, derivative work. And if Glaser and his colleagues were as naive as they like to make out, that’s no doubt what we would have got. But the works here, including many new commissions, are often beautiful, and always visually arresting.

Inspired by research into sickle cell anaemia conducted at King’s College London (the gallery’s owner), Glaser and the show’s curator, Andy Franzkowiak, have assembled an exhibition that can be read both for its beauty and for its scientific pertinence.

Given the show quite literally drips with the red stuff, it is still capable of surprising subtlety. Turn from the mechanical behemoth perfusing a bucket’s worth of pigs’ blood in Peta Clancy and Helen Pynor’s installation The Body is a Big Place, and you confront a video filmed in the waters of a municipal swimming pool.

Those people clinging to the sides are organ donors, potential recipients and their families. They are each of them out of their depth in an alien environment, seen through a medium and at an angle that makes identities impossible to establish. If you want an image of what it is like to be caught at the end of your tether in the toils of a necessarily complex and bureaucratic system – well, this video is surely it.

Some of the best pieces here are the most direct. In a riposte to the usual cock-and-balls graffiti found in public toilets, the Hotham Street Ladies have decorated the walls of the gallery’s gents with menstruating uteruses made of icing sugar and sweets.

And then there’s Tough Blood by film-maker Stephen Rudder and choreographer Skylitz, a dance conveying, with brutal beauty, the excruciatingly painful episodes suffered by people with sickle cell anaemia.

It’s a campaigning piece, made to highlight the UK and US blood services’ refusal to accept donations from this cohort on the same basis as other groups. The eye is drawn first to the acetate sheets themselves, and naturally enough – given the associations between spilt blood and violence and pain – it’s not a pretty sight. It might not be until you turn to leave the room that it dawns on you that this blood is being projected. The walls and ceiling and floor are covered with it: rich, crackled, stained and impossibly beautiful.

In a strong show, it’s hard to think of a work that better expresses the intent of this queasy, seductive exploration of “the essential, expressive and visceral nature of blood”.