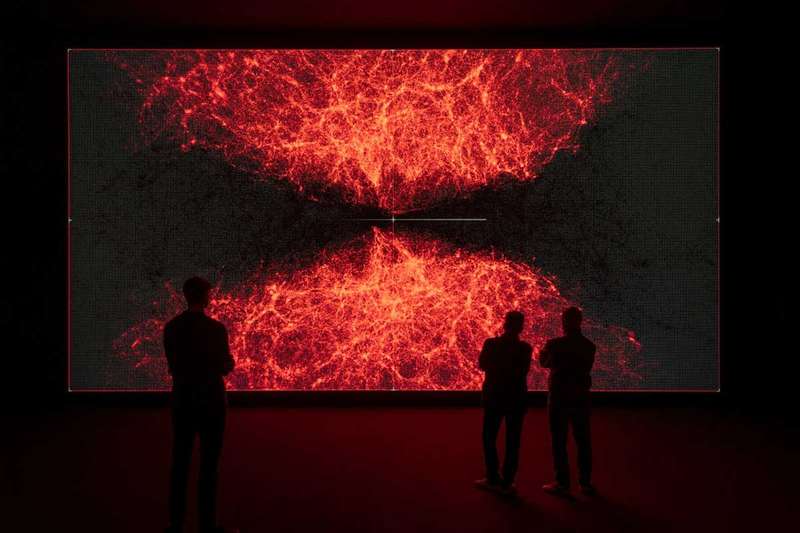 Visiting May You Live In Interesting Times, the 58th International Art Exhibition at the Venice Biennale, for New Scientist, 16 May 2019

BETWEEN now and 24 November, half a million people will visit May You Live in Interesting Times, the main art exhibition of the Venice Biennale. More than 120 years old, the Biennale is the world’s biggest and most venerable art fair. This year’s offering overflows its historical venue in the gardens on Venice’s eastern edge and sprawls across the city.

In a 300-metre-long former rope-making factory in Venice’s Arsenale, a complex of former shipyards and armouries, it is hard to miss data-verse 1 by Japanese DJ and data artist Ryoji Ikeda: the first instalment of a year-long project to realise an entire universe on a gigantic, wall-sized high-definition screen.

Back in Paris, in a studio that consists of hardly more than a few tables and laptops, Ikeda and his programmers have been peeling open huge data sets, using software they have written themselves. From the flood of numbers issuing from CERN, NASA, the Human Genome Project and other open sources, they have fashioned highly detailed abstract animations.

Ikeda is self-taught. He came to visual art from making animations to accompany DJ sets in the squats, clubs and underground parties of Kyoto, Japan. While his own musical taste was eclectic in the extreme, “from classical to voodoo”, Ikeda was drawn to house and dub: forms in which he says “the sound system is the real subject, not the music being played”.

Ikeda’s project to reduce the world to its essentials continues: “I wondered what would happen if matter were reduced the same way.” Now Ikeda has turned himself into one of art’s curious beasts, the pure “data artist”.

Each of data-verse 1‘s 15-minute-long abstract “dances” explores the universe at a different scale, from the way proteins fold to the pattern of ripples in the cosmic background radiation. However, Ikeda’s aim is not to illustrate or visualise the universe, but to convey the sheer quantity of data we are now gathering in our effort to understand the world.

In the Arsenale, there are glimpses of this new nature. The Milky Way, reduced to wheeling labels. The human body, taken apart and presented as a sequence of what look like archaeological finds. A brain, colour-coded, turned over and over, as if for the inspection of a hyperactive child. A furious blizzard of solar images. And other less-easily identified sequences, where the information has peeled away entirely from the thing it represents, and takes on a life of its own: red pixels move upstream through flowing numbers like so many salmon.

Ikeda differs from his fellow data artists. While a generation has embraced and made art from “big data” – the kind of dynamic information flow that derives from recording a constantly changing world – Ikeda remains wedded to an earlier, more philosophical definition of data as the record of observed facts. Chaos and complexity for their own sake do not interest him. “I never use dynamic data in my work,” he says.

He did try, once. In 2014, he won a residency at the Large Hadron Collider at CERN, Switzerland. But he found the data overwhelming. “They have supercomputers and one experiment takes two years to analyse and compute,” he says, “and still it’s not really enough. They proposed I use this dynamic data, but how could one single artist handle this? We talk of ‘big data’ but no one imagines really how big it is.”

So Ikeda’s data-verse 1 project, which will take a year and two more productions to reach fruition, is founded on that most old-fashioned of ideas, a record of objective truth. It is neither easy nor cheap to realise, and is being supported by watch-makers Audemars Piguet, an increasingly powerful patron of artists who operate on the boundaries between art and science.

Last year, the firm helped Brighton-based art duo Semiconductor realise their CERN-inspired kinetic sculpture HALO. Before that, it invited lidar artist Quayola to map the Swiss valley where it has its factory.

While Audemars Piguet has an interest in art that pushes technological boundaries, Ikeda fights shy of talk of technology, or even physics. He is interested in the truth bound up in numbers themselves. In an interview with Japanese art critic Akira Asada in 2009, he remarked: “I cannot help but wonder if there are any artists today that give real consideration to beauty. To me, it is mathematicians, not artists, who epitomise that kind of individual. There is such a freeness to their thinking that it is almost embarrassing to me.”

Other highlights at the Arsenale include Dominique Gonzalez-Foerster’s Endodrome, (above) a purely virtual work, accessed through a HTC Vive Pro headset. The artist envisioned it “as a kind of organic and mental space, a slightly altered state of consciousness”. Manifesting at first as a sort of hyper-intuitive painting app, in which you use your own outpoured breath as a brush, Endodrome’s imagery becomes ever more precise and surreal. In a show that bristles with anxiety, Gonzalez-Foerster offers the festival-goer an oasis of creative contemplation.

Also at the Arsenale, and fresh from her show Power Plants at London’s Serpentine Gallery, the German artist Hito Steyerl presents This Is the Future, (above) a lush, AI-generated garden of the future, all the more tantalising for the fact that you’ll probably die there. Indeed, this being the future, you’re sure to die there. Steyerl mixes up time and risk, hope and fear, in a wonderfully sly send-up of professional future-gazing.

The Giardini, along the city’s eastern edge, are the traditional site of La Biennale Art Exhibitions since they began in 1895. They’re where you’ll find the national pavilions. Hungary possesses one of the 29 permanent structures here, and this year it’s full of imaginary cameras. They’re the work of cartoonist-turned media artist Tamás Waliczky. Some of his Imaginary Cameras and Other Optical Devices (above) are based on real cameras, others on long-forgotten 19th-century machines; still others are entirely fictional (not to mention impossible). Can you tell the difference? In any event, this understated show does a fine job of reminding us that we see the world in many, highly selective ways.

There’s quite as much activity outside the official venues of the Biennale as within them. At the Ca’ Rezzonico palazzo until 6 July, you have a chance to save an internationally celebrated artist from drowning (or not- it’s really up to you). A meticulously rendered volumetric avatar of Marina Abramović beckons from within a glass tank that is slowly filling with water, in a bid to draw attention to rising sea levels in a city which is famously sinking. Don’t knock Rising (above) till you’ve tried it: this ludicrous-sounding jape proved oddly moving.

Back at the Arsenale, Ed Atkins reprises his installation Olde Food, (above) which had its UK outing at London’s Cabinet gallery last year. Atkins has spent much of his career exploring what roboticist Masahiro Mori’s famously dubbed the “uncanny valley” — the gap that is supposed to separate real people from their human-like creations. Mori’s assumption was that the closer our inventions came to resembling us, the creepier they would become.

Atkins has created a world populated by uncanny digital avatars who (when they’re not falling from the sky into sandwiches — you’ll have to trust me when I say this does make a sort of sense) quite clearly yearn for the impress of genuine humanity. These near-people pray. They play piano (or try to). They weep. They’re ugly. They’re uncoordinated. They’re quite hopeless, really. I do wish I could have done something for them.