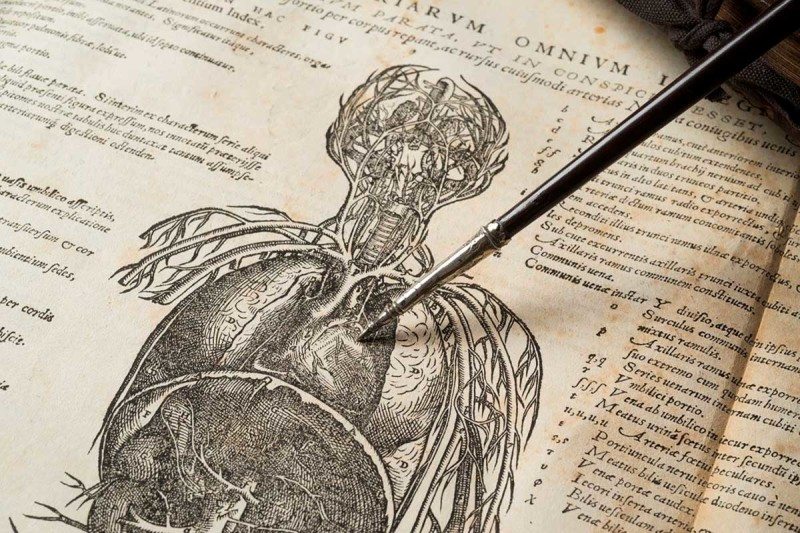 Visiting the Royal College of Physicians for New Scientist, 17 February 2018

AFFECTION and delight aren’t qualities you would immediately associate with an exhibition about blood flow. But Ceaseless Motion reaches beyond the science to celebrate the man – 17th-century physician William Harvey – who, the story goes, invented the tradition of doctors’ bad handwriting. He was also a benefactor: when founding a lecture series in his own name, he remembered to bequeath money for the provision of refreshments.

It is an exhibition conceived, organised and hosted by the UK’s Royal College of Physicians, whose 17th-century librarian Christopher Merrett described how to make champagne several years before the monk Dom Pérignon began his experiments. Less happily, Merrett went on a drinking binge in 1666, and let Harvey’s huge book collection burn in London’s Great Fire.

The documents, seals and signatures that survived the flames despite Merrett’s neglect take pride of place in an exhibition that, within a very little compass, tells the story of one of medicine’s more important revolutionaries through documents, portraits and some deceptively chatty wall information.

Before Harvey’s 10 years of intense, solitary study bore fruit, physicians thought blood was manufactured in the liver and then passed through the body under its own volumetric pressure. Heaven help you if you made too much of the stuff. Luckily, physicians were on hand to release this disease-inducing pressure through bloodletting.

It sounds daft now, but clues back then that something quite different was going on were sparse and controversial. The 16th-century physician Andreas Vesalius had puzzled over the heart. If, like every other organ, it fed on blood produced in the liver, why were its walls so impenetrably hard? But even this towering figure, the founder of modern anatomy, decided that his own observations had to be wrong.

It was Hieronymus Fabricius, Harvey’s teacher in Padua, Italy, who offered a new and fruitful tack when he mapped “the little doors in the veins” that, we know now, are valves maintaining the flow of blood back to the lungs.

Within 30 years, Harvey’s realisation that blood pressure is controlled by the heart, and that this organ actively pumps blood around the body in a continuous circuit, had overturned the teachings of the 2nd-century Graeco-Roman physician Claudius Galen in European centres of learning. The new thinking also put close clinical observation at the heart of a discipline that had traditionally spent more time on textual analysis than on examining patients.

The exhibition is housed in a building designed by Denys Lasdun. This celebrated modernist architect was so taken by Harvey’s achievements that he designed the interiors as a subtle homage to the human circulatory system.

With the royal college now celebrating its 500th birthday, its institutional pride is palpable, but never stuffy. As one staff member told me, “We only started talking about ourselves as a ‘Royal’ college after the Restoration, to suck up to the king.”

Those who can visit should be brave and explore. Upstairs, there are wooden panels from Padua with the dried and salted circulatory and nervous systems of executed criminals lacquered into them. They are rare survivors: when pickling methods improved and it was possible to provide medical students with three-dimensional teaching aids, such “anatomical plates” were discarded.

Downstairs, there are endless curiosities. The long sticks doctors carried in 18th-century caricatures were clinical instruments – latex gloves didn’t arrive until 1889. The sticks’ silver ferrules contained miasma-defeating herbs and, sometimes, phials of alcohol. None of them are as handsome as Harvey’s own demonstration rod.

But if a visit in person is out of the question, take a look at the royal college’s new website, launched to celebrate half a millennium of institutional conviviality and controversy. You will have to provide your own biscuits, though.