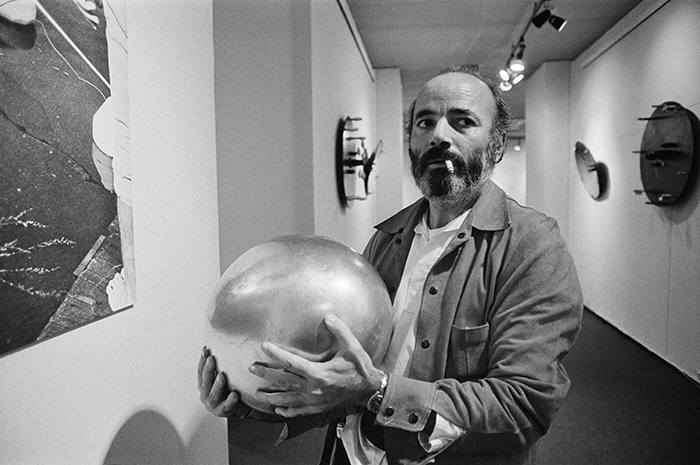 Steel flowers bend in a ‘breeze’ generated by magnetic pendulums. This is the first thing you see as you enter Tate Modern’s survey show. And ‘Magnetic Fields’ (1969) is pretty enough: the work of this self-taught artist, now in his nineties, has rarely been so gentle, or so intuitive.

But there’s a problem. ‘I would like to render [electromagnetism] visible so as to communicate its existence and make its importance known,’ Takis has written. But magnetism hides in plain sight. A certain amount of interference is necessary before it will reveal itself.

Does the interference matter? Does the fact that gallery assistants have to activate this work every ten minutes spoil the ‘cosmicness’ of Takis’s art? The sculptor Alberto Giacometti thought so: ‘One day, during one of my exhibitions, he told me that he didn’t agree with my use of electricity for some of my works,’ Takis recalled in an interview in 1990. ‘He disliked the fact that if you switched off the power, the work would cease to function.’

Why Takis’s pieces should prompt such a finicky response isn’t immediately obvious. What do we expect of this stuff? Perpetual motion? One moment we wonder at the invisible force that can suspend delicate metal cones fractions of an inch above the surface of a canvas. The next moment, we’re peering where we shouldn’t, trying to figure out the circuitry that keeps a sphere swinging over a steel wire.

We’re presented with many wonders — objects rendered weightless, or put into permanent vibration. And as the show progresses (it’s surprisingly large, designed to unfold around corners and spring surprises at your back) the work gets less intuitive, and a lot louder. A pendulum, orbiting a strong, floor-mounted magnet, whips eccentrically and not at all gently about its centre of attraction. It’s like nothing in visible nature. There’s no ‘magnetic breeze’ here, no ‘force like gravity’, just the thing, the weirdness itself. Now we’re getting somewhere.

Born Panayiotis Vassilakis in 1925, Takis discovered his alchemical calling early. One memoir recalls how ‘as a small boy, he would bury pieces of broken glass and other such oddments in the ground to see what happened to them when he impatiently dug them out a couple of days later’. In 1954 he moved to Paris, where he fell in with Marcel Duchamp and Yves Tanguy. In London he inspired a group of young artists who went on to create the politically radical Signals London gallery. In America the beats admired him, the Massachusetts Institute of Technology gave him a fellowship, and the composer John Cage encouraged his shamanism. (‘I cannot think of my work as entirely my work,’ Takis writes. ‘In a sense, I’m only a transmitter.’)

Takis treads the same awkward line in visual art that Cage did in music. Cage promised us that behind the music of signs lay some sort of sonic essence. But his snark hunt proved rather dull. Takis’s own search ends more happily, if only because the eye, in its search for signs, doesn’t admit defeat nearly as quickly as the ear. Takis’s traffic signals, stripped of context and perched on tall poles, become eyes full of sadness and yearning. They still mean something. They’re still signs of something.

Made from oddments plucked from boxes of army and air-force surplus on Tottenham Court Road, some of Takis’s more engineered work has dated. We look at it as a sort of industrial archaeology. Its radicalism, its status as ‘anti-technology’, is hard to fathom.

But the simpler pieces need no translation. They are (suitably enough, for an artist whose works often screech and rattle) a sort of visual equivalent of music. They do not mean anything. They are meaning. They reflect harmonious relationships between energy and space and mass. Takis’s work is like his subject: it hides in plain sight.