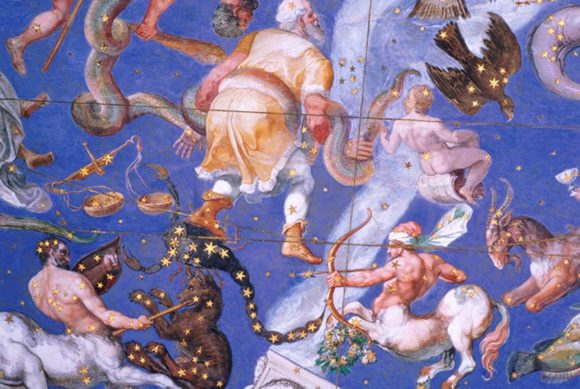 Reading A Scheme of Heaven: Astrology and the Birth of Science by Alexander Boxer
for the Spectator, 18 January 2020

Look up at sky on a clear night. This is not an astrological game. (Indeed, the experiment’s more impressive if you don’t know one zodiacal pattern from another, and rely solely on your wits.) In a matter of seconds, you will find patterns among the stars.

We can pretty much apprehend up to five objects (pennies, points of light, what-have-you) at a single glance. Totting up more than five objects, however, takes work. It means looking for groups, lines, patterns, symmetries, boundaries.

The ancients cut up the sky into figures, all those aeons ago, for the same reason we each cut up the sky within moments of gazing at it: because if we didn’t, we wouldn’t be able to comprehend the sky at all.

Our pattern-finding ability can get out of hand. During his Nobel lecture in 1973 the zoologist Konrad Lorenz recalled how he once :”… mistook a mill for a sternwheel steamer. A vessel was anchored on the banks of the Danube near Budapest. It had a little smoking funnel and at its stern an enormous slowly-turning paddle-wheel.”

Some false patterns persist. Some even flourish. And the brighter and more intellectually ambitious you are, the likelier you are to be suckered. John Dee, Queen Elizabeth’s court philosopher, owned the country’s largest library (it dwarfed any you would find at Oxford or Cambridge). His attempt to tie up all that knowledge in a single divine system drove him into the arms of angels — or at any rate, into the arms of the “scrier” Edward Kelley, whose prodigious output of symbolic tables of course could be read in such a way as to reveal fragments of esoteric wisdom.

This, I suspect, is what most of us think about astrology: that it was a fanciful misconception about the world that flourished in times of widespread superstition and ignorance, and did not, could not, survive advances in mathematics and science.

Alexander Boxer is out to show how wrong that picture is, and A Scheme of Heaven will make you fall in love with astrology, even as it extinguishes any niggling suspicion that it might actually work.

Boxer, a physicist and historian, kindles our admiration for the earliest astronomers. My favourite among his many jaw-dropping stories is the discovery of the precession of the equinoxes. This is the process by which the sun, each mid-spring and mid-autumn, rises at a fractionally different spot in the sky each year. It takes 26,000 years to make a full revolution of the zodiac — a tiny motion first detected by Hipparchus around 130 BC. And of course Hipparchus, to make this observation at all, “had to rely on the accuracy of stargazers who would have seemed ancient even to him.”

In short, a had a library card. And we know that such libraries existed because the “astronomical diaries” from the Assyrian library at Nineveh stretch from 652BC to 61BC, representing possibly the longest continuous research program ever undertaken in human history.

Which makes astrology not too shoddy, in my humble estimation. Boxer goes much further, dubbing it “the ancient world’s most ambitious applied mathematics problem.”

For as long as lives depend on the growth cycles of plants, the stars will, in a very general sense, dictate the destiny of our species. How far can we push this idea before it tips into absurdity? The answer is not immediately obvious, since pretty much any scheme we dream up will fit some conjunction or arrangement of the skies.

As civilisations become richer and more various, the number and variety of historical events increases, as does the chance that some event will coincide with some planetary conjunction. Around the year 1400, the French Catholic cardinal Pierre D’Ailly concluded his astrological history of the world with a warning that the Antichrist could be expected to arrive in the year 1789, which of course turned out to be the year of the French revolution.

But with every spooky correlation comes an even larger horde of absurdities and fatuities. Today, using a machine-learning algorithm, Boxer shows that “it’s possible to devise a model that perfectlly mimics Bitcoin’s price history and that takes, as its input data, nothing more than the zodiac signs of the planets on any given day.”

The Polish science fiction writer Stanislaw Lem explored this territory in his novel The Chain of Chance: “We now live in such a dense world of random chance,” he wrote in 1975, “in a molecular and chaotic gas whose ‘improbabilities’ are amazing only to the individual human atoms.” And this, I suppose, is why astrology eventually abandoned the business of describing whole cultures and nations (a task now handed over to economics, another largely ineffectual big-number narrative) and now, in its twilight, serves merely to gull individuals.

Astrology, to work at all, must assume that human affairs are predestined. It cannot, in the long run, survive the notion of free will. Christianity did for astrology, not because it defeated a superstition, but because it rendered moot astrology’s iron bonds of logic.

“Today,” writes Boxer, “there’s no need to root and rummage for incidental correlations. Modern machine-learning algorithms are correlation monsters. They can make pretty much any signal correlate with any other.”

We are bewitched by big data, and imagine it is something new. We are ever-indulgent towards economists who cannot even spot a global crash. We credulously conform to every algorithmically justified norm. Are we as credulous, then, as those who once took astrological advice as seriously as a medical diagnosis? Oh, for sure.

At least our forebears could say they were having to feel their way in the dark. The statistical tools you need to sort real correlations from pretty patterns weren’t developed until the late nineteenth century. What’s our excuse?

“Those of us who are enthusiastic about the promise of numerical data to unlock the secrets of ourselves and our world,” Boxer writes, “would do well simply to acknowledge that others have come this way before.”